Not long ago, news was understood in simple categories: by place (local, national, international) or by time (breaking, daily, or old). News could even be described with the exasperated question, “How is that even news?” (This is also known as the Department of No Shit, Sherlock.)  Of course, media and technology had significant issues before Trump, but overall, news was known and accepted as an essential artery of our social grid, feeding our relationships, democracy, and leisure entertainment.

At debates and rallies, Donald Trump sold his mediocrity by establishing himself as an outsider whose business savvy would upend the tired, entrenched D.C. status quo. Trump may be the first U.S. president ever to winningly market his own lack of knowledge as a point of commonality with the American people and use it to his political advantage: You, too, can become president if you watch enough cable news and cross check it with episodes of Saturday Night Live. Trump positioned his relationship with mainstream media as a ploy to appear bigly relatable and anti-establishment. Apparently, it worked.

With Congress feasting on lobbyist-sponsored Trump Steak™ lunches, 45 set his sights on discrediting the only establishment that’s ever seriously believed in the power of democracy: The Media. Enter the most destructive soundbite we’ve ever heard: Fake News. The collocation is equal parts perilous and pathetic. He and his kinfolk kakistocracy klan have manipulated language as a means of defense. People like Trump and his cronies understand that the repetition of such a negative and dismissive phrase corrodes and destabilizes our relationship to information and makes us question the most basic and logical tenets of communication. Because if you can’t convince the American people you’re right, the next best thing is to convince them that everyone else is wrong. 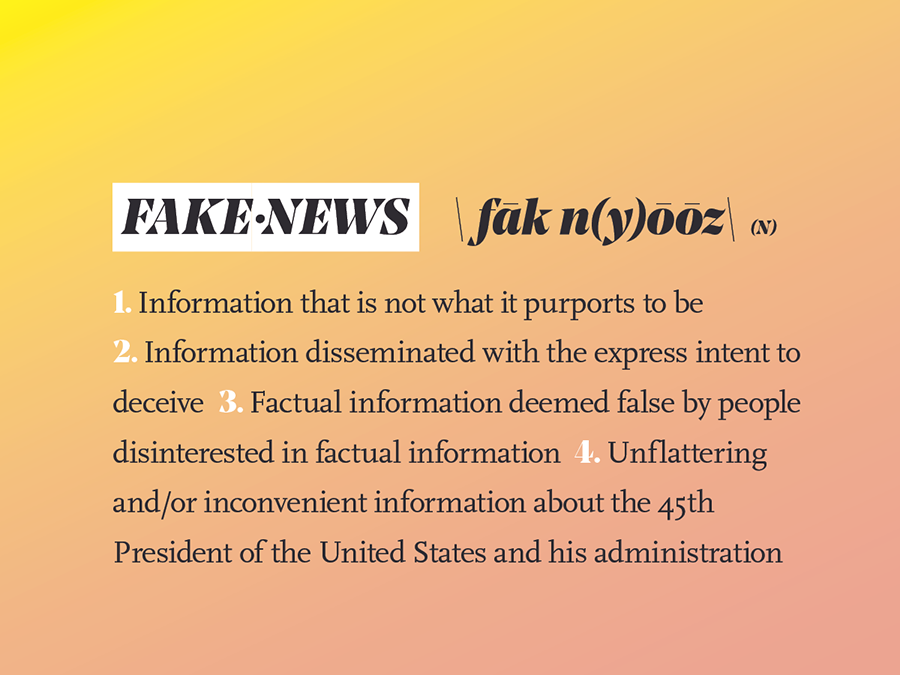 Although it’s never been perfect, news media is supposed to help facilitate a vital  conversation between citizens and their government. But since Trump can’t bear the weight of the presidency, he instead creates diversions and redirections that amp up the illusion that he knows anything about governance. And so we have linguistic rotary games at Spicy’s press conferences instead of answers, and rallies in Trump-approved states instead of real policies and plans.

Fake news does exist, just not the way Trump claims. As if borrowing from the Everything You Need to Know About Gaslighting Your Own Public handbook, Trump labels the majority of credible and legitimate intel, research, and journalism with the term to invalidate anything he finds threatening or unflattering (just ask the National Park Service). The resulting effect is varied: mass paranoia, political atrophy, or growing repugnance.

There are many ways to dispel something that is untrue, but Trump’s agenda is not fact-finding or correcting the record. Instead of showing up with proven facts that clarify a story, Trump bleats “Fake news!” to create a volatile and psychological impact. Repeated over and over again, the phrase throws up a smog of uncertainty—even, sometimes, for those of us who can recognize a pathological liar.

So, when Trump accuses the Democrats of creating “Fake news!” to explain away a “terrible campaign” in which Hillary Clinton won the popular vote by nearly 3 million votes, you know that the growing evidence that Russia interfered and colluded with Trump associates is a real threat to the legitimacy of his presidency. Opinions about isolationist policies? Fake news. Trump even drops the F-word to describe basic journalistic observations that can be confirmed by anyone with eyes and ears, as when news outlets reported on his undeniably awkward meeting with German Chancellor Angela Merkel. From the highest levels of intel to the use of threatening adjectives like “strained” to describe a meeting, Trump cries “Fake news!” because his presidency and mental state are just that fragile.

And let’s not forget this administration’s creation of fake news, as when Kellyanne Conway invoked the “Bowling Green Massacre,” a fictitious bloodbath enacted by two would-be Iraqi terrorists.  Or when Trump claimed he witnessed “thousands” of New Jersey Muslims celebrate the falling of the Twin Towers on 9/11. (Police could not corroborate the claim, nor has there been any evidence of the thousands-strong partygoers across the Hudson River.) But Trump says he saw it with his own eyes—which means, he later clarified, that he saw it on TV.

Instead of looking at the dimensions of a problem—say, public education or health care—“Fake News!” aims to splinter our attention and diffuse it in the service of our President’s incoherent tweets and rising paranoia. Legitimate news outlets often source their information so consumers are equipped to weigh the truth for themselves, but Trump does the opposite. He attempts to disempower questions, belittle logic, or place blame on the very nature of civic curiosity. Bullies do that. And if you want to stay on your feet when you’re toe-to-toe with a bully, you have to keep eye contact. When the bully points with one hand and yells, “Look out!” you’ll see the fist coming from the opposite direction.

by Bitch HQ
Donald Trump is lying to us all and we’re sick of it. Here's what we're doing about it.