In an age of incessant, instantaneous liking and retweeting, it is a radical act to make an album that requires patience. Future Politics, Austra’s third LP but the first entirely written, produced, and engineered by frontwoman Katie Stelmanis, is a call to arms laced with moments of pause and emotional recharging. Over five years after “Hate Crimes,” the most politicized song on the group’s 2011 debut, Feel It Break, the darkness at which Katie Stelmanis lyrically hinted has now become visible, coalescing into what she describes as “the terror and destruction wrought by colonialism and white supremacy.” Stelmanis has become more out in her queer identity and cognizant of her whiteness in recent years, and clearly wrote this album as a sonic analysis of the world from these perspectives.

On the title track (which is also the album’s standout single), Stelmanis interweaves layers of drum machine beats, synths and keys, and her incredible, opera-trained vocals, all of which build until everything empties out at the start of the second verse, leaving just her voice and sparse instrumentation. When the drums come roaring back, Stelmanis forcefully sings, “I don’t want to hear that it’s all my fault/ The system won’t help you when your money runs out.” As the accompanying music video illustrates, Stelmanis wrote this song as an act of solidarity with people of color, using inclusive queerness as her jumping-off point. This is Austra at its most political—and especially on tracks “We Were Alive” and “Monster,” Stelmanis hits the perfect balance of waxing political, singing with compelling emotion, and casting synthpop spellwork.

After “Monster,” Future Politics transitions somewhat surprisingly to “I Love You More Than You Love Yourself.” As with “You Change My Life” on Austra’s second album, Olympia, the song is heartfelt but feels out of place. Conversely, “Gala” contains some of Stelmanis’s most beautiful and powerful vocals, which soar up so high in the chorus that they blend in with the music accompanying them. Stelmanis carries this emotional and rhythmic intensity through to the album’s end, bolstering the record even as it hits slow patches. In the spirit of Blood Orange’s June 2016 release, Freetown Sound, Future Politics beckons to listeners lyrically and rhythmically, begging a reconfiguration of how they experience and move through the world. This album reaches into hearts, minds, and bodies, and doesn’t easily let go of any of it. 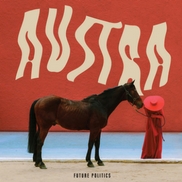