The X FactorOne Letter, Multiple Identities, and a Complex Future 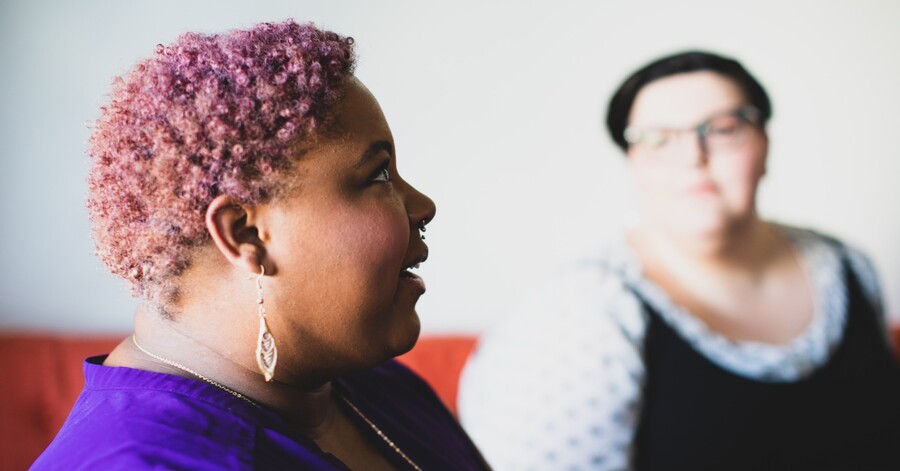 Photo credit: AllGo - An App For Plus Size People on Unsplash

Lately, it seems like every week brings a new gender-crisis headline, whether it’s Potato Head going genderless (but not really); Oreo cookies affirming that trans people exist; or the GOP’s sudden fixation on the importance of women’s sports. And then there’s the gender-neutral “x,” a reliable site of outrage that most recently reared its head in the discourse when Twitch, the online streaming company, posted (and later deleted) a Women’s History Month–related tweet that used the word “womxn” in place of “women.” The pushback that followed illustrated a contemporary paradox: In most contexts, “x” is used to signify a variable—that is, the absence of an essential identifying characteristic, a signifier of possibility. As a marker of ostensible gender neutrality, however, it is becoming a different kind of signifier, one that points to the ways in which we understand identity (in a U.S. context, at least) as something individualized, capitalistic, and inherent—and by extension, unchanging.

In terms like “womxn” and “folx” (as well as in race designations like Latinx and Filipinx, where it faces a different kind of pushback), “x” is billed as a feature of inclusive language. (Whether English, an inherently colonial language, can ever be truly inclusive is another question.) “Womxn” appears to have originated as a variant on “womyn,” which, along with “wimmin” and  “womben” was used in the consciousness-raising of the 1960s and ’70s by radical feminists looking to symbolically decenter men in language as they confronted systems of patriarchy. In more recent decades, unfortunately, the word has become associated with trans-exclusionary spaces like the long-running Michigan Womyn’s Music Festival, which shut down for good in 2015 after two decades of protests regarding its “womyn-born-womyn” attendance policy.

Presumably due to this association of “womyn” with trans-exclusionary policies, “womxn” has entered the lexicon billed as an intentionally trans-inclusive alternative. As with any language created by collective, the term’s origins are hard to pin down, but its rise in popularity can be traced to the mid-late 2010s, and its definition is loose. The gender-neutral “x” is sometimes used to signal inclusivity of a variety of experiences of womanhood altered by race and gender, but other times used to denote inclusion of trans and nonbinary people. (The latter, as Twitch discovered, is well-intentioned but misplaced inclusion given that most nonbinary people probably don’t want to be included in the category of “women”). Another early instance of “x” used to indicate gender neutrality is in the honorific “Mx,” which also reportedly dates to the 1970s.

“X” also has a complex history as a political symbol in other social movements. Malcolm X chose it for his last name, taking on a naming convention of the Nation of Islam, to symbolize the ancestral surname lost as a result of slavery and colonialism. “For me,” he wrote in his 1965 autobiography, “my ‘X’ replaced the white slavemaster name of ‘Little’ which some blue-eyed devil named Little had imposed upon my paternal forebears.” This political use of the letter has dual dimensions—it is both “ex” as “former” and “x” as the variable, the unknown quantity. It’s easy to get bogged down in semantic debates about intra-community language: Take the perpetual confusion around the evolution of trans language, or who can and cannot “reclaim” slurs. These debates can seem increasingly circular within social movements, as language continues to grow and evolve as our collective needs and views change. That said, when it comes to “inclusion” (itself a buzzword worth questioning), the debates about which words we “should” be using bring up a valid point. The adoption of “inclusive” language—in workplaces, in schools, and elsewhere—implies the existence of a politic while not guaranteeing the embodiment of that politic in action or policies. Your organization wants to create a “safe space” for all womxn? That’s great, in theory—but are there any trans women in your group or on your steering committee?

The appearance of “x” as a political stance on gender appears outside the realm of inclusive language as well: The Biden administration, for instance, recently received a good deal of media attention for taking steps toward offering it as a gender marker on legal identification documents. Advocates want the government to go further and eliminate gender markers altogether—and say that the gender marker X, which is currently offered on driver’s licenses by 19 states and the District of Columbia, paves the way for that possibility. The addition of the X marker would open more pathways for gender self-identification without the invasive process of “proving” one’s gender to the state via documentation; advocates including the American Civil Liberties Union are currently pushing for the removal of policies that require people to submit a court order or medical certificate in order to verify their gender. But others argue that despite these benefits, adding the option of X can still be seen as a reification of gender as a facet of state surveillance.

It’s a complex issue, and one that proves that seeing trans people—or any identity group—as a monolith is counterproductive. Many nonbinary people do feel seen by their X gender IDs, and that’s particularly important given how many trans people face discrimination for not “looking like” the gender marker on their ID. Others disagree: Trans activist and writer Dean Spade, for one, was skeptical of the necessity of gender designations when speaking about the potential of Washington state introducing an X gender marker in 2019: “These IDs are not about the states recognizing who we really are. They’re about survival.” Spade went on: “I feel like it’s really important to oppose the notion that [it’s] is a matter of human dignity and inclusion to be seen by the government in a surveillance regime.” Which raises the question: What are the benefits and drawbacks of seeking inclusion in a system that has a history of sanctioned discrimination and violence against your identity group—when for some, inclusion is a mechanism for survival? And then there’s the added complexity of “inclusion” itself, which does not automatically connote freedom from discrimination within the system. Put simply, an X marker can be seen as identifying trans people in a way that could target them further.

The adoption of “inclusive” language—in workplaces, schools, and elsewhere—implies the existence of a politic while not guaranteeing the embodiment of that politic in action.

X as a stand-in for nonbinary identity, essentially presenting it as a kind of “third gender,” is an example of how our current identity politics fails us by conceiving identity as a series of static markers that are inherent and unchanging—rather than something constructed in tandem with the systems that raise us, and that is always changing in relation to our environments. Biden’s indication of approval of the X gender marker is part of the new administration’s larger goal of emphasizing inclusion, both in institutions (its first notable pro-LGBTQ act was to lift the trans military ban) and in everyday language. But while language is vital in influencing social attitudes and helping to shape social norms and opinions, it’s also something that needs to be accompanied by concrete policy action. A shift toward more inclusive language is arguably meaningless if the administration is still replicating Trump-era (or even Obama-era) immigration policies. Sure, the government no longer calls people “aliens”—but that doesn’t mean they’re not treating them like they’re less than human.

The same is true with gender: It won’t matter to trans people that you’ve added X to the menu of gender identifiers if you’re not creating attendant policy solutions to discrimination faced by trans people. And trans people have plenty of good reasons to distrust any form of government scrutiny over gender identity: We may have a new administration and a new Equality Act, but we’re also seeing a glut of anti-trans legislation in statehouses and rising rates of violence faced by trans people, sometimes at the hands of the authorities. But beyond X as a shiny new government-sanctioned gender or a promise of “inclusivity,” the letter’s current iteration is the product of a collective obsession with individualized identity—a neoliberal flattening of our selves into signifiers that can be bought and sold. This is a position some of us (generally, those who can profit from it) have bought into.

When identity is neat, when radical inclusion just means adding a “they/them” pronoun option to the drop-down menu or chanting vague affirmations like “Trans women are women,” the stakes stay low and systems of power do not need to change. But identity, as I think you know, is so much messier than the rules we’ve applied to it. I want to be the mathematical “x,” the unknown and unknowable. I want my gender to be something unimagined, an unrevealed variable, an option that disappears when you make a choice. You can’t hold my gender in your hands. You can’t buy it, much less market to it. Even if it is a step in the direction of “inclusion,” “x” is not a solution to the problems that plague our current understandings of identity and gender.