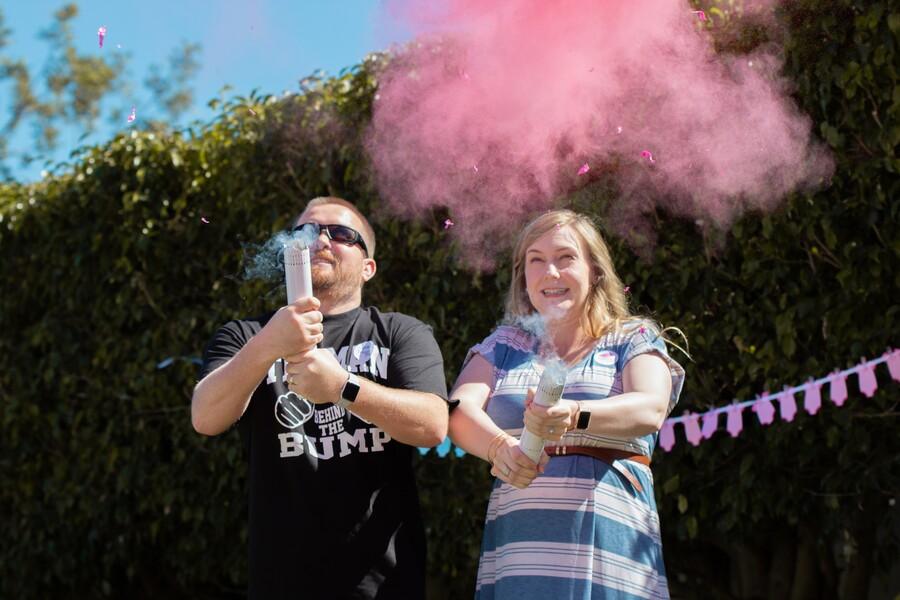 In October 2019, an Iowa family, excited about a pregnancy, celebrated a gender reveal that resulted in the death of a 56-year-old woman in attendance. A device that was meant to reveal the baby’s supposed gender became an accidental pipe bomb, and the attendee was struck in the head with a piece of metal. She died immediately. One month later, a gender reveal in which a plane deposited pink water over a Texas field resulted in the plane stalling and crashing; luckily, no one was killed. Two years earlier, in April 2017, an Arizona gender reveal involving a gun and the explosive powder Tannerite went very wrong; the explosion resulted in a wildfire that burned more than 47,000 acres of land and incurred more than $8 million in damage. As I write this piece, a wildfire in Southern California’s San Bernardino County has already burned more than 10,000 acres. The source? A “smoke-generation pyrotechnic device” used in a gender-reveal party.

Though it seems nearly impossible to imagine a world without gender reveals given how deeply they’ve become embedded in pop culture and in our Facebook scrolls, they’re a fairly new phenomenon. In 2008, Chicago blogger Jenna Karvunidis unintentionally sparked the craze when her gender-reveal party went viral following a write-up in a local magazine. With the advent of social-media platforms like Facebook, Instagram, YouTube, and Pinterest, the gender reveal soon became an online staple—and Karvunidis began to rethink the trend. On the same blog where she once innocently shared a gender reveal cake, she spoke out against the trend, explaining, “I’ve felt a lot of mixed feelings about my random contribution to the culture. It just exploded into crazy after that. Literally—guns firing, forest fires, more emphasis on gender than has ever been necessary for a baby.” In a 2019 interview with NPR, she conceded that the gender-reveal trend has “become a bit of a nightmare.” But the gender reveal has become an industry in itself: The internet that made it possible for Karvunidis to unwittingly create a trend is the same internet that commodifies it, sustains it, and raises the stakes for tacit competition between parents for the title of most viral—and thus, most memorable—gender reveal. It’s not about the joy of welcoming new life to loving families; it’s about the video you can post on Facebook.

Social media is to blame, but the reason is twofold. The more obvious one is simple: Social media creates trends. The literal platforms, whether Instagram or Pinterest, reward the posts that draw the most engagement. Posts that are reshared and saved and dotted with countless hearts will be shared broadly with users like those who originally engaged with them. We know that social media breeds a passionate sameness, with influencers and everyday people alike flocking to Instagram bait like pink walls in Los Angeles and rushing to Starbucks to buy drinks created for the sole purpose of going viral online. Parents are no different, and as child Instagram influencers have come into being—with or without their consent—we’re forced to consider what it means for the privacy of young people when their entire lives exist online for the benefit, financial or social, of those raising them.

On the other hand, there is social media’s amplification of longstanding debates about gender itself. “Who cares what gender the baby is?” Karvunidis wrote in her 2019 mea culpa. “I did at the time because we didn’t live in 2019 and didn’t know what we know now—that assigning focus on gender at birth leaves out so much of [a child’s] potential and talents that have nothing to do with what’s between their legs.” But social media has become a vessel for politicized arguments about gender and identity, and for conservative parents terrified by the transphobic fear-mongering peddled by Fox News and Facebook, celebrating your unborn child’s assigned sex is a way to affirm the gender imperatives you understand, and approve of: blue for boys, pink for girls; trucks or tiaras. It’s a battle that begins before the child is even born, starting with a cake. And ending, more and more often, in tragedy.

Social media, in upping the ante for gender reveal parties, has created a hierarchy in which parents who want their parties to go viral must continue to go all in, even if it results in flames.

“If identity is shaped by the views that are represented to others, then it can be argued that hosting a gender reveal party prematurely allows parents to decide, on behalf of their children, how they will be represented to, and by, the world,” explains Janelle Applequist in a 2014 paper titled “Pinterest, Gender Reveal Parties, and the Binary: Reducing an Impending Arrival to Pink or Blue.” Applequist focused chiefly on Pinterest and its majority female user base, examining the way the platform encouraged parents, specifically mothers, to plan not only gender reveal parties, but gender itself: “Pins on Pinterest allow parents to identify, earlier than ever, the gender that they wish their child to perform. By quite literally compartmentalizing the gender binary, Pinterest acts as a vehicle for the social construction of reality.”

In 2014, Applequist noted, more than 125,000 gender-reveal videos had been uploaded to YouTube. These days, YouTube videos like “These Gender Reveals Will Make Your Heart Burst!” have millions of views, and TikTok compilations of gender reveals accumulate hundreds of thousands of views, enabling audiences to watch clip after clip and obtain fresh-feeling ideas about how to celebrate the gender of their own child. On Pinterest, parents share tips to DIY baby showers on a budget, or to screen-print custom t-shirts; users are also inundated with ads from Target, buybuyBaby, and Zazzle. “I’m so ready to be a boy mom,” one blogger writes on a popular post. “I literally can’t imagine the letters for girl coming out of that box now.” Make something with blue smoke to commit to your son and to have your unborn son commit to his boyhood. It won’t be dangerous, right?

Gender reveals aren’t only utilized by conservative parents; parents across the political spectrum remain fascinatingly unwilling to part with a tradition that’s barely tradition at all. As Applequist puts it, “Pinterest commodifies new liberal desires, allowing notions of gender to be played into these views. A neoliberal feminist subject is created, whereby a woman using Pinterest feels that she has the power to categorize her own life.” The literally explosive gender-reveal parties that increasingly make headlines offer that same sense of false agency. By planning and hosting gender reveal parties that align with the gender binary, parents are pushing an idea, benign or not, of what they want their children’s gender to look like. It’s something they have limited control over (if they have any control at all), and yet they make their child’s gender, ultimately, about themselves. And social media, in upping the ante for such parties, has created a hierarchy in which parents who want their parties to go viral—and, in the process, the genders of their children to be celebrated around the world—must continue to go all in, even if it results in flames.

Read this Next: From Online Discourse to IRL

by Rachel Charlene Lewis
Bitch is lucky to have multiple bisexual employees, so we’re using this roundtable to parse out our own experiences as bisexuals.