Pistols or PearlsGender Reveal Parties Are a Sham 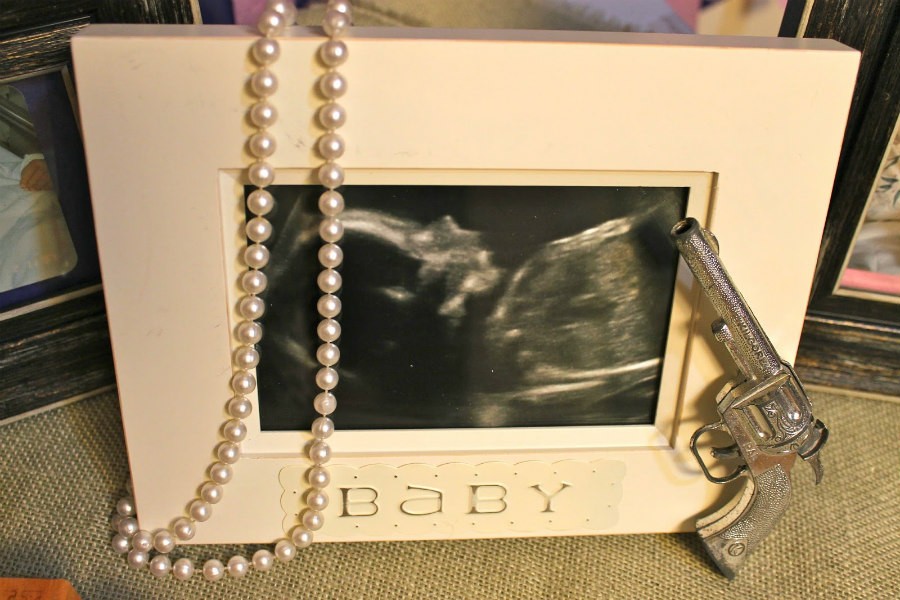 Picture this: A heterosexual couple that is expecting a baby allow doctors to determine the sex of their unborn child. Instead of learning the sex in that moment (of course, it’s only one of two options), they pass the information to a baker, piñata maker, or other vendor who creates a special celebratory item or experience. Outwardly, the box or cake gives no indication of gender, but the inside contains one of two colors—blue and pink—that stand-in for “boy” or “girl.” The creation is then cut, bitten into, shot, smashed, unwrapped, opened, or otherwise taken apart in the presence of friends and family, and the excited parents learn their child’s sex—and then call it “gender.”

Gender-reveal parties are a widely known phenomenon—a modern tradition among some families. Recording these celebrations and posting them on the internet came into vogue in roughly 2008, when the first gender-reveal video was uploaded to YouTube featuring a couple simply opening an envelope with their ultrasound results among family, a fairly tame affair compared to their current iteration. Social media was nascent, but slowly becoming a way of documenting lived experiences for public consumption and social capital. It allowed people to curate their own lives across various platforms, and as is the case with gender reveals, offered accessibility. Suddenly, private life events gained something they’d never had before: an audience. Equal parts performative theater and stylized oral history, social media began to redefine life, recollection, and living memory, and the “gender reveal” persists as a memorable component of that wave.

Nowadays, gender-reveal parties are an event—almost a milestone—with their own dedicated cottage industry that has cropped up everywhere from Facebook to Twitter, to Pinterest, to Etsy. 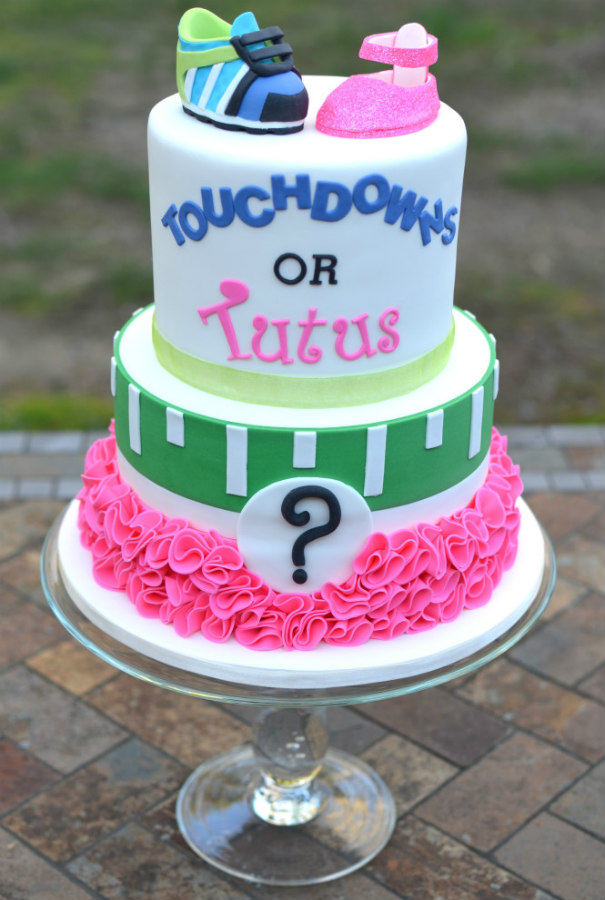 Photo via But A Cream Cake

Cakes with colored frosting inside are prevalent, but the milieu incorporates everything from colored silly string to colored tablets (to add to one’s champagne!) If the primary purpose of social media is to make the mundane appear more significant and special and less ordinary than it is, then this is the great magic trick that “gender reveals” seem to exploit: putting “creativity” into the most mundane and reductive medical information available about an unborn child. Gender-reveal parties are a race to create the most innovative, tacky, and downright regressive pink-or-blue-explosion possible. (Rifles or Ruffles? Stick or No Stick?) While baby showers seemingly give parents necessary tools disguised as gifts, the “gender reveal” is an extravaganza.

Much has been said about gender reveals—largely from a cis lens about the public spectacle of intimacy. “What was once a joyous moment shared between mother and father has become a spectacle for all to ogle at” goes the refrain, romanticizing a past that never was in the effort to pin all moral decay on androids and iPads. Expectant parents are not particularly known for being big on privacy or withholding details of their journeys. To zero in on the party itself as the cause of digital narcissism rather than a symptom of expanding communication is almost a fun-house mirror trick: Casting these parties as some kind of modern trend when they are anything but. Gender-reveal parties are a public version of the father in the waiting room handing out cigars—and that’s kinda the point.

Gender-reveal parties go further than that: They’re a reinforcement of binary gender. Despite the mainstream trans visibility and gay rights movements, gender reveals show that we are traditionalists who are eager to amplify dominant cultural narratives. It still belies an obsession with fitting people into one of two neat categories—Pistols or Pearls?—and imposes gendered traits and behaviors before a child has even left the womb. Celebrating that your baby is destined to either experience a lifetime of emotional suppression while being encouraged to be violent and self-serving or be treated as a second-class citizen with avenues of opportunity withheld, strikes me as a tad macabre—but maybe I’m just bad at getting into the spirit of these things. 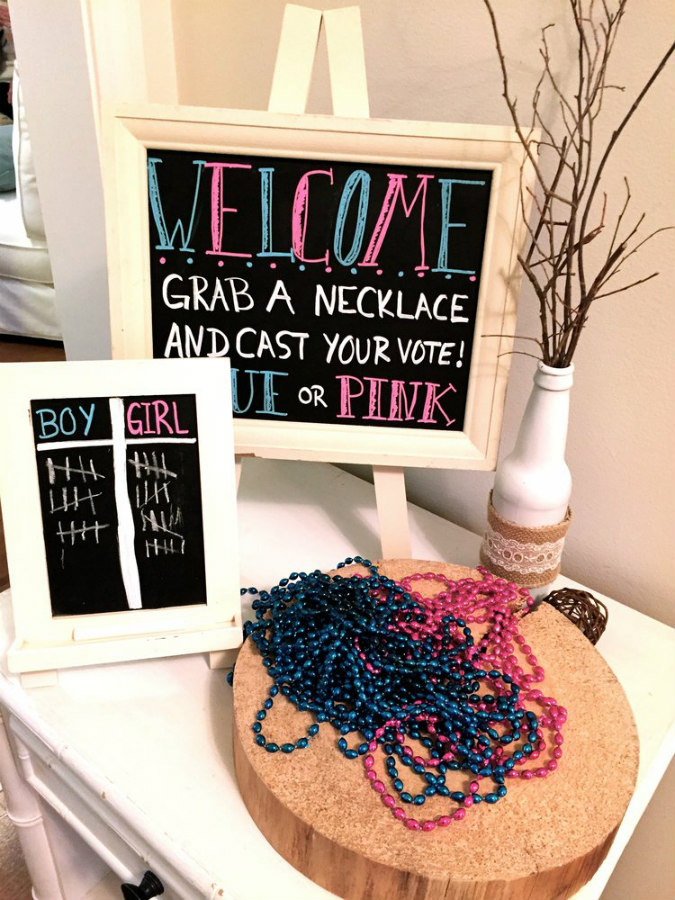 Gender-reveal parties are baloney. One’s sex has little bearing on one’s gender, but cisnormative society at large is still uncomfortable acknowledging this. Cis parents, in general, are very uncomfortable acknowledging that there could be anything non-cis about their children at all—that pink or blue isn’t the be-all and end-all of gendered human experience and the very real harms that can come from pretending that this is the case. There’s almost a smell of vain hope about the whole matter—of trying to exert some control, some sense of familiarity and well-trodden ground in the miasma of chaos that is navigating pregnancy and parenthood. Some notion that by rehashing comfortable, well-worn cis lies, one’s own experience might be that too. That your child won’t turn out to be like that.

Catering to this hope, or rather fear, is profitable. Between the baked goods, party favors, and event planning that goes into these affairs, capitalism is supporting cisnormative narratives as usual while making money off the whole thing. It’s a nice, symbiotic relationship between data-mining social media, bakers with blue-and-pink frosting, and jittery cis parents wishing with all their hearts that their baby’s gender comes down to a simple coin flip that will remain unchallenged throughout the child’s life. Ultimately it boils down to just wanting the best for your baby, in a particularly trans-antagonistic way.

After all, what’s the alternative? Creating a society where people are not harshly punished, endlessly derided, and subjected to brutal violence for deviating from their rigid and pre-ordained gender roles? That sounds difficult. Unfortunate as it is, though, much of the gendered violence faced by people both cis and trans will not abate until those who are complicit in cultural gender narratives do the difficult work. Assumptions and biases must be examined and overturned, expectations related to narrow gender confines lifted, and stigmas against gender nonconformity abolished. Rather than reveal a child’s “gender” to the world and impose all the anguish that comes with that predestination, let’s reveal a world that is truly accepting and embracing children regardless of their performance of gender. That sounds like a much better party. 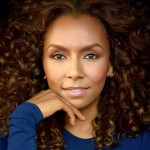 by Raquel Willis
Janet Mock is no longer offering a 101 master class on trans identity.