Free From the Haze of Nostalgia, the New "Ghostbusters" Soars | Bitch Media

Free From the Haze of Nostalgia, the New “Ghostbusters” Soars 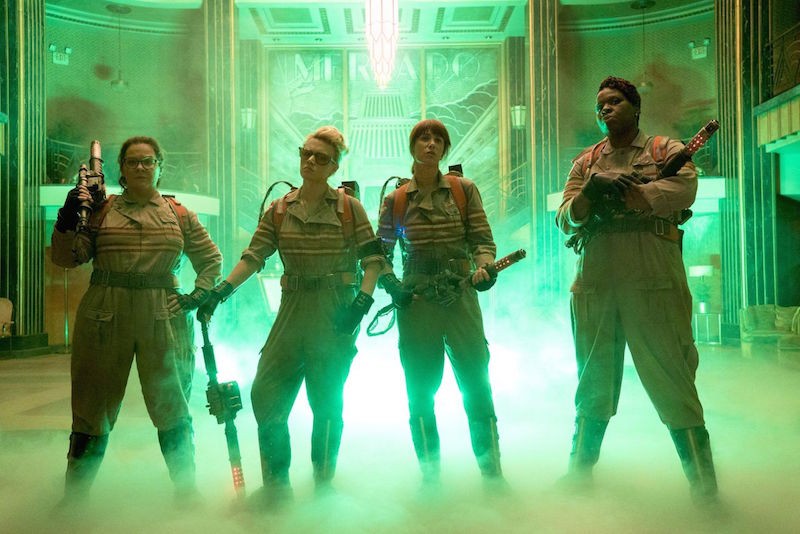 “It’s easy to sit there and be a naysayer when you don’t actually do anything.”

Like several other lines in the new Ghostbusters movie, this quote seems like it’s aimed as much at the audience as it is at the characters. More specifically, it’s targeting the dudebros who complained that remaking the original 1984 movie with four female leads would ruin their childhood.

Since we owe sexist crybabies nothing, I’m not going to waste my time arguing why a movie with four female leads deserves to exist. My big fat feminist statement on that issue is “Of course it bloody does,” and you can quote me on that.

However, I’m also not going to spend time considering how Ghostbusters 2016 stands up to the original.

I never saw it. I’m a child of the ‘80s and ‘90s, who grew up steeped in franchises such as Teenage Mutant Ninja Turtles, My Little Pony, and Jem, but for some reason I missed the Ghostbusters craze and just never got around to seeing it.

With no memory of the original film, I can view the new film without the haze of nostalgia. I can evaluate the movie purely on its merits rather than defining it in comparison to what a bunch of guys did 30 years ago. I can watch it as just a movie (rather than “a women’s movie” or “political correctness ruining a sacred franchise!”) and evaluate it as such. I can maybe even imagine what it’s like to see four female leads in an action movie and consider it completely normal, not noteworthy.

While the discussion of Ghostbusters before its release has been dominated by people with deep, sentimental connections to the original, this film isn’t just for people who grew up with Ghostbusters. There is a whole generation of filmgoers growing up right now—and this movie will be awesome for them. The movie theatre I watched Ghostbusters in was predominantly populated with adolescent girls. They were there with friends, family, and dates, but it was apparent from the offset that this was girl territory and any male spectators were respectfully observing this female alchemy from the sidelines. A fizz of excitement permeated the theatre before the trailers even began, but unlike many a movie I’ve watched with teenagers filling the theatre, the adolescent audience here was focused as soon as the movie started; no popcorn fights, no chatting, not a cell phone screen in sight. That’s high praise coming from a notoriously unimpressed generation, regularly criticized for its short attention span, and seeing such immersion gave this relative oldster quite a buzz. My generation may have had She-Ra, but the upcoming generation of girls gets these four real-live, funny, kick-ass women as their heroes; that fact alone makes Ghostbusters a true feel-good movie. 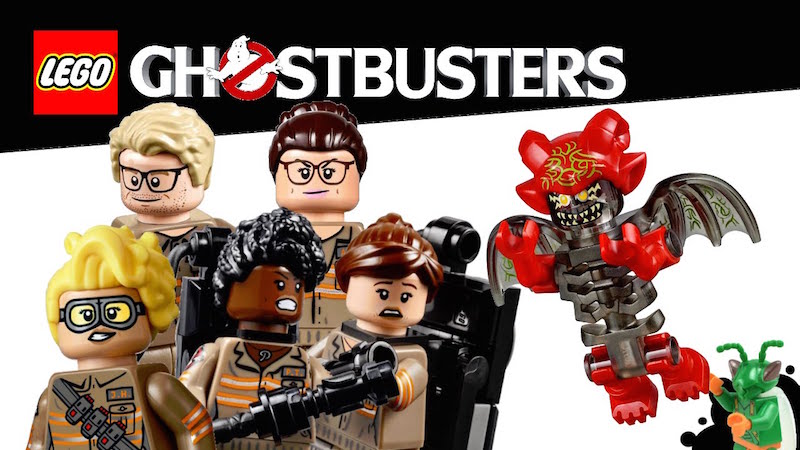 The LEGO versions of the new Ghostbusters.

It may sound a bit pretentious, but the premise of the movie reminded me of the ancient Greek myth of Cassandra. Cassandra was given the gift of prophecy, but she was cursed so that no one would believe her, and so many thought she was insane. In the film, after paranormal activity begins to plague New York City, three scientists set out to prove the existence of ghosts—by catching them. They’re joined by a Metropolitan Transportation Authority worker whose skepticism is shattered by an unsettling encounter near a subway tunnel, and the four create their own ghost-catching-and-busting agency. Just a couple of snags: No one believes them and everyone’s mocking them.

At first I thought Ghostbusters’ script might follow the Bridesmaids gross-out template (there are references to queefing and poop within the first ten minutes), but, thankfully, this was a short-lived concern. The jump-out-of-your-skin moments start decisively with the appearance of the first (female) ghost, establishing an energetic pace that doesn’t drop for the rest of the movie.

Kristen Wiig’s character, dorky, buttoned-up physics professor Erin, is soon covered in slime while Melissa McCarthy’s character Abby plays the relentlessly cheery maverick. Fortunately, McCarthy’s role steers clear of the caricature that some of her past roles have tended towards. Kate McKinnon is an absolute revelation as the quirky, thrill-addicted engineer Holtzmann. But Leslie Jones’s Patty is a less-defined character—although Jones gives her one-liners plenty of oomph, her dialogue sometimes feels like it’s from the “let’s give the Black character lots of ‘Dayum!’ And ‘Aw hell no!’ quips” school of writing.

It’s also unfortunate that Patty is the only nonscientist character; it’s a shame that the film made such effortless leaps in depicting three women as experts in STEM fields but baulked at making any of them women of color. Instead, Patty is a transit employee with an intimate knowledge of New York. I could write a sociological thesis on the fact that the only Black lead character is a storyteller and unofficial historian of the streets, but let’s just say that the difference between the scientists and Patty feels a bit jarring.

Though Patty could have benefitted from better dialogue, it’s hard not to like all four leads, as the chemistry between them is effortless. For their new ghost-busting business, they choose the dumb-but-pretty Kevin (Chris Hemsworth) as a receptionist. The film clearly aims to flip the script on the damsel in distress trope, where women are essentially portrayed as set decoration who watch men get Real Things done. Kevin provides nothing but eye candy (he can’t even answer a phone correctly) and ultimately has to be rescued by the Ghostbusters when he gets possessed by the spirit of a malevolent loner. Speaking of those, the baddie of the movie is the basement-dwelling Rowan (“It’s always the sad, pale ones,” sighs Abby), who has been bullied all his life and gets called “weirdo” and “freak show” by his workmates. This is his tenuous justification for craving vengeance on all of humanity (or at least the whole of New York City, which I believe is movie shorthand for the whole world, right?), but when he tries this line on the Ghostbusters, they’re not having any of it. “We get dumped on pretty much all the time,” Abby tells him. It’s pretty obvious that Rowan is meant to be an amalgam of the whining keyboard warriors who claimed they would be gravely oppressed if a filmmaker dared to put the spotlight on four women for 120 minutes. Abby’s response could be all women’s response: You think you’re discriminated against, straight white male? Try being female, Black, or LGBT for a few days. Elsewhere, the symbolism is even less discreet, like when the Ghostbusters shoot Rowan’s ghost directly in the crotch. 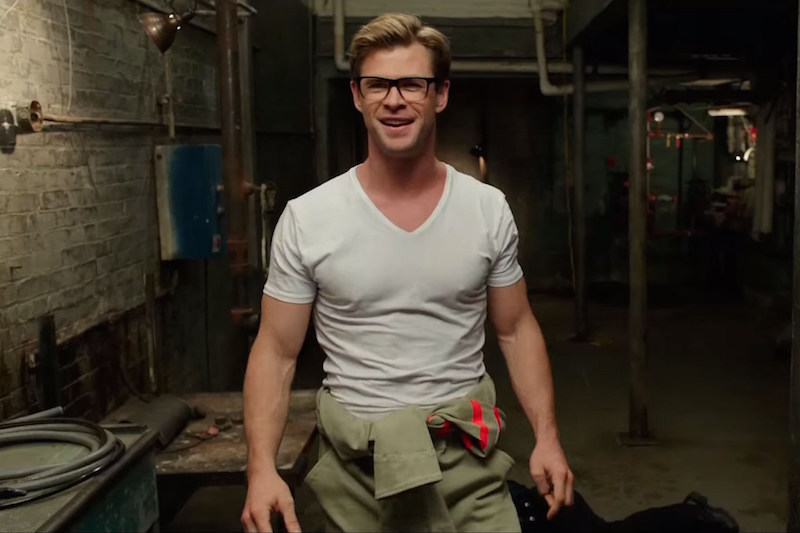 Yes, there is a lot of slapstick humor, and the movie is definitely not above dick jokes. Ghostbusters is still a big dumb action movie. But it’s directed and written with an intelligence and playfulness,  and you come away from it feeling charged by its sensory infusions rather than feeling as if your nerves were deadened from all the surround sound and CGI. This movie harks back to a pre-9/11 world, when seeing New York City on fire was just an exciting disaster movie storyline. It also pays tribute to Godzilla and King Kong, with the ghosts destroying the city with glee. But unlike most action films, it centers on female characters. This doesn’t feel heavy-handed or like a shtick—it just feels fun and refreshing. At one point, Abby takes a moment to sarcastically tell some police and military officers, who stood frozen with fear in the face of ghosts, “Great work, fellas. Your country thanks you.” Seeing a group of women save the world from violence could be particularly cutting given recent events. It could also just be a simple statement that women get shit done.

The movie ends with a choreographed “Thriller”-style funk-out for no reason other than why not, and as the credits roll, the audience is treated to scrolling, topless pictures of Chris Hemsworth. Ghostbusters is fun, it’s silly, and it doesn’t take itself too seriously. It also undoubtedly works as a stand-alone movie; if, like me, you’ve never seen the original and don’t care a fig for its place in cultural history, you’re still in for a great time. You might even be better off for not bringing the weight of history with you when you see it, although the rumblings I’ve heard from fans of the original have so far been equally positive. As someone who watches very few action or sci-fi movies (not least because of the perpetual sexism I suspect I’ll find in them), it made me think: If movies in this genre are going to be like this from here on out, I might start watching more of them.