Lunchbox Moment“Gilmore Girls” Is Haunted by Its Asian American Problem 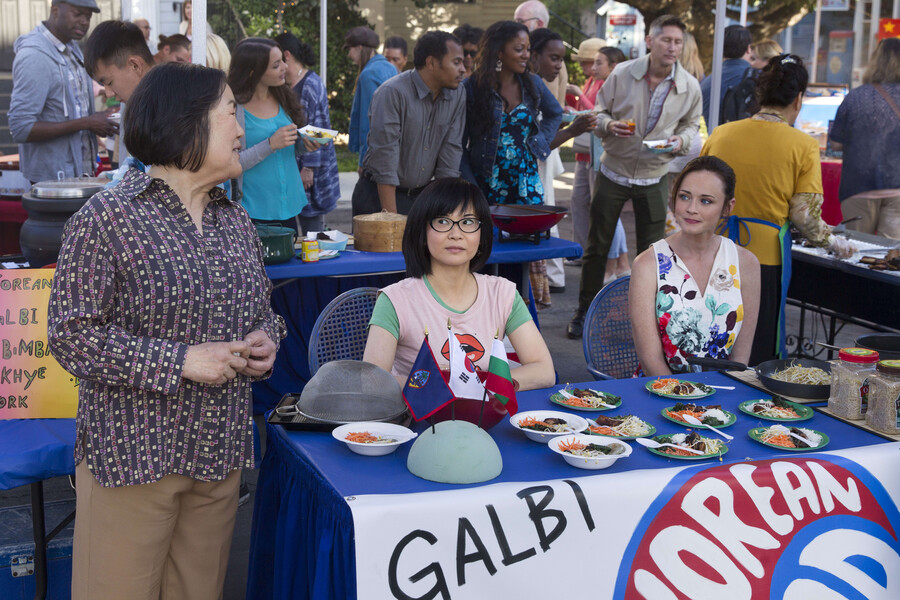 In the opening credits of Gilmore Girls, Carole King sings, “If you’re out on the road, feeling lonely and so cold/ All you have to do is call my name, and I’ll be there on the next train.” For the past two years, I’ve been on the campaign trail, moving from state to state in order to win a Democratic White House and Senate. Through many long hours of cold calling voters, I kept the television on as background noise. As an organizer, I relied on the early 2000s feminist TV show Gilmore Girls to help me feel comforted and safe. When I was on the road and voters were telling me to get lost (or using slightly more colorful language), I’d ground myself in Stars Hollow.

As a South Asian woman raised in a quick-witted culture by a brilliant, funny mother, Gilmore Girls’ fast-talking mother/daughter dynamic reminded me of home. Though I find comfort in Gilmore Girls, the show’s representation of South Asian culture is anything but comforting. The characters in the show make offhand remarks about my culture and my home, situating it as strange, foreign, and off-putting. Few things capture this dynamic as well as the Season 2 episode “There’s the Rub.” Lorelai Gilmore (Lauren Graham), the show’s blue-eyed matriarch, complains about her daughter Rory’s (Alexis Bledel) choice of Indian takeout. “Oh, you’re ordering the Indian food…. Can you burn the house down afterward? ‘Cause that’s the only way we’ll get the smell out.” Later in the episode, the same stale, racist joke gets played again when Jess (Milo Ventimiglia), Rory’s love interest, says, “Planning on burning down the house afterwards? The only way to kill the smell!”

The “smelly immigrant food” trope is a common racial epithet, hurled not only at Indians, but at members of other Asian American communities too. Asian American kids often encounter racist comments from classmates—so much so that the experience of having our home-cooked meals mocked has been dubbed “the lunchbox moment.” This experience extends beyond just meal time and gets applied to Asian American bodies as well. Remember the University of Houston professor who, two years ago, deemed it appropriate to tell his students that South Asian students’ supposedly “strong body odor” offended him? Or this bartender, who shared his story of being fired from his job for “smelling like curry?” The idea that South Asians’ food and bodies are “smelly” is a harmful stereotype used to humiliate, marginalize, and discriminate against the community at large.

When considering the fraught cultural context that situates South Asian food, throwaway comments about “burning down the house” no longer seem funny or harmless. At best, these jokes are insensitive, and at worst, they indicate a deeply problematic lack of respect for South Asian Americans. If Lorelai and Jess were real people, I’d explain to them that food from unfamiliar cultures can smell bad to anybody—that the smell of meat can make lifelong vegetarians nauseous and the smell of dairy can be off-putting for many Asians. I’d tell them that despite their belief that Indian food smells unpleasant, it’s incredibly disrespectful to dismiss an entire culture’s cuisine, especially given the damage the “smelly immigrant food” stereotype causes to the real lives of South Asian Americans.

But, of course, Lorelai and Jess are fictional characters. And, in theory, Lorelai shouldn’t need to be taught tolerance and respect for Asian American communities—at least, not based on the understanding and empathy she regularly demonstrates toward other characters. Throughout the series, viewers see Lorelai interact lovingly with the Korean American community she lives alongside, including Rory’s best friend, Lane Kim (Keiko Agena). Lorelai and Rory attend Korean cultural events with Lane, are friendly with Lane’s extended Korean family, and even encourage Lane to stay connected to her Korean culture in moments when she questions her relationship with it. Lorelai and Rory warmly embrace Lane, her mother Mrs. Kim (Emily Kuroda), and their Korean neighbors. (It’s worth noting that Lane Kim’s character was written into the show based on the life of Gilmore Girls producer, Helen Pai.)

While Agena and Kuroda are of Japanese heritage, the show took care to ensure they portrayed the Korean American community respectfully. Pai’s parents were brought in to coach Kuroda on her portrayal of Mrs. Kim, including her Korean language skills. The show maintained Korean consultants at least through Season 6, primarily in order to portray Lane’s traditional Buddhist Korean wedding accurately. Lane’s portrayal has been heralded as a win for Asian American representation on screen. That said, even the Kim family’s portrayal can be troubling. Lane and Mrs. Kim serve as foils to Rory and Lorelai, but while Rory’s storyline involves attaining an Ivy League education and chasing her professional dreams, Lane’s storyline ends with Lane dropping out of college, unexpectedly becoming pregnant, and abandoning her musical dreams. Fans overwhelmingly disapprove of Lane’s character arc and are left wondering why the white American character gets to live out her dreams, while her Asian American friend’s dreams are disregarded. The show’s creators seemingly put effort into representing Lane’s Korean community respectfully—but Lane’s arc tells Asian fans that their hopes and dreams weren’t a priority.

“Gilmore Girls” is a contradiction in and of itself: It’s a show that wants to love its Asian American cast while reveling in tasteless anti-Asian humor, a show that tried to represent Asians well but never quite gave the task its proper due.

In this way, Gilmore Girls is a contradiction in and of itself: It’s a show that wants to love its Asian American cast while reveling in tasteless anti-Asian humor—a show that tried to represent Asians well but never quite gave the task its proper due. I find Gilmore Girls comforting as a daughter and empowering as a woman, but how can I be comforted and empowered by a show whose supposed feminism fails to be truly intersectional in a way that triggers my own personal experiences of racism? Though some fans dismiss the show’s problems because many of its time included anti-Asian sentiments, it’s still popular enough to resonate—so much so that Netflix revived the series in 2016. This also means the show’s messaging continues to impact audiences’ understanding of the world around them and reflect Americans’ long-held bigotries. This is why the show’s casual racism—as well as homophobia, transphobia, and fatphobia—hit especially hard for its marginalized fans.

I could say that it’s easy to love Gilmore Girls because its anti-Indian jokes and overall treatment of Asian characters are so small and insignificant that they don’t really cause pain—but this simply isn’t true. I have had my own lunchbox moments; I have had white roommates insinuate that my family’s home is smelly; I have had my food and my culture mocked until I felt too small and too alone to eat in public. Lorelai and Jess’s jokes about Indian food aren’t insignificant for me, and I reject the idea that Asian Americans need to minimize the racism thrown at us in order to assimilate into white American culture, even when that comes to the media we consume. After Atlanta, after everything we’ve been through as a community, that idea is dead. We will not pretend these whips don’t sting.

I love this show without ceding my pride, and I find comfort in it without dismissing its present-day implications. Despite finding inspiration, love, and safety in a white feminist show, as a woman of color in the United States, I am forced to navigate around the shades of complexity ingrained in all of the ways white women like Lorelai Gilmore can harm us. Lorelai Gilmore is a canon Democrat, but she is also a white woman with racial biases. Women like Lorelai can love a marginalized individual like me or like Lane, but they are steps away from loving and understanding my community as a whole—and that hurts viscerally. Like Gilmore Girls, white womanhood in America is that very real contradiction in terms.

As an organizer, I was taught to meet people where they’re at, and many white women are at the same place as Lorelai Gilmore. Although it still hurts me in real life to try and meet them there, I can do it safely in the media I love and in the community dialogue I build around it. Loving Gilmore Girls teaches me how to approach the place where white women are, to value what they bring to the table of feminist solidarity, while simultaneously acknowledging the damage they cause my community. Being a South Asian fan of Gilmore Girls lets me practice how to be a feminist of color alongside white women who think they love Asian Americans, but in reality, have a long, long way to go.

Read this Next: Bad Blood 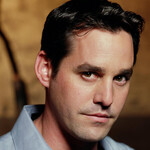 by Marina Watanabe
To understand Joss Whedon’s nerdy repackaging of entitlement toward women and their bodies, one must look no further than the subtext of “Buffy the Vampire Slayer.” 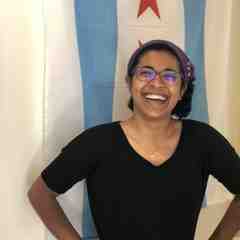 Thulasi Seshan is a Democratic organizer, researcher, and longtime Gilmore Girls fan. Her background is in international relations, voting rights, and public lands issues. She can be found in the basement of a Chicago bookstore on any given day.