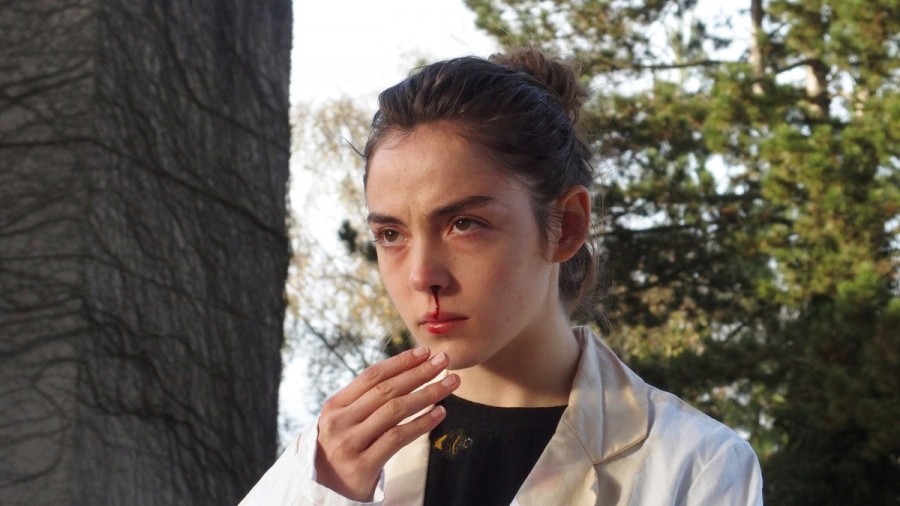 Justine (Garance Marillier) is a new student at a veterinary school that proves to be a series of initiations to the flesh for the naif: She’s never tasted flesh, literally (she’s a lifelong vegetarian) or figuratively (and a virgin). Upperclassmen subject the new students to intense hazing rituals, including pulling them out of their beds and forcing them to crawl on their hands and knees to a debauched rave, coating them in blue and yellow paint and instructing them to become green, and drenching them in blood for a class photograph. Introverted Justine is game for everything except eating a raw rabbit kidney, which she tries to refuse, but ends up swallowing in a communion-like manner from the hand of her sister, Alexia, an upperclassman at the same school.

Justine quickly develops a violent allergic reaction to the rabbit meat, and is taken over by fits of frantic scratching. Her raked raw skin and the film’s vibrant colors underscore the awakening of something new. Justine begins craving and eating meat secretly, pocketing a hamburger patty here, biting into raw chicken in the middle of the night there. During a scene featuring a pair of scissors and the most tense at-home bikini waxing gone wrong, Justine discovers by chance that what she truly craves is human flesh. What’s more, her sister shares the same secret.

Raw is gross—how could a coming-of-age horror film about teenage cannibals not be? Bodies of all kinds are opened and explored, not just because the protagonist is a cannibal, but also because she’s the top student cannibal at veterinary school. There is a scene in which Alexia and Justine have a conversation while Alexia is performing a rectal exam on a cow, and that’s just the background of the scene; it is not related to the plot at all. Just another day in veterinary school. Gross-out shots, however, do not dominate the screen. The camera instead lingers on moments that ground the viewer in Justine’s body—her fits of scratching, kissing and sex scenes, Justine watching herself dancing in front of a mirror—to unfold her metamorphosis. “For me, the link with the teen movie or the coming-of-age story is that I am very, very interested in bodies. I really like to film them, and I like to use the bodies of my characters in order to talk about their psyche,” says Ducournau. “What I love about body-horror grammar is that if you turn off the sound on your TV and you watch the movie, not only do you [still] understand the plot, you also understand what’s happening inside that character and how they’re feeling, because it’s portrayed on their skin and on their body.”

Justine’s sexual awakening is inextricably linked to her new appetites, and when she eyes the shirtless bodies of young men playing soccer like a predator, we don’t know if she’s fantasizing about taking them to the sheets or the dinner table. A shot of Justine at a party, her legs spread and her hands at her crotch, licking her lips while watching her peers dancing is similarly ambiguous and thrilling.

Justine is zombie-like in her desire for flesh, and Garance Marillier is parfait in the role, contorting her body and face with a propulsive drive to attack and eat humans like a rabid dog. When a student pulls Justine off her boyfriend at a party and demands Justine find someone else to kiss, Justine launches herself mouth first at the girlfriend, down to taste anyone. During a fight between the sisters, Justine and Alexia snarl at each other and have to be restrained, collar-like, by their classmates in order to stop them from killing each other with their teeth.