When Zora Neale Hurston died in 1960, her life’s work had long been forgotten. Her books were no longer being printed and she was working as a domestic in the homes of rich, white folks in Fort Pierce, Florida. The greatest writer I’ve ever read died penniless, and didn’t even have enough life insurance to afford a headstone. Had Alice Walker not discovered Their Eyes Were Watching God and Mules and Men in the 70s; traveled to Eatonville, Florida and pretended to be Hurston’s niece to get access to her grave; and put a marker on it, the greatest writer I’ve ever read would’ve stayed in obscurity, her genius works—about Black women, love, Southern heritage, voodoo, and the ability to piece a broken life back together—forgotten forever.

Walker singlehandedly resuscitated Hurston’s legacy, an unparalleled act of sisterhood that models how Black women can, and often do, show up for each other. When it seems as if we’ve been forgotten, we push for our sisters to be treated better. Walker later created writing groups for her fellow Black women scribes and wrote The Color Purple, a novel about the power of women loving each other and finding their voices together. Walker, and the scores of Black women who helped Girls Trip secure a $30 million opening weekend, know that sisterhood is one of the universe’s life forces. Unlike the faux sisterhood that’s propagated as “empowerment,” true bonding—built through love and sustained through loyalty—can withstand all traumas: heartbreak, hurt, grief, devastation, embarrassment, and peeing on the heads of Essence Festival concert-goers as they collect beads down Bourbon Street in New Orleans.

Girls Trip taps into an unspoken, but clearly understood, mantra: You ride for your girls, no matter what. Ryan (Regina Hall), Lisa (Jada Pinkett-Smith), Sasha (Queen Latifah), and Dina’s (Tiffany Haddish) sisterhood began at Florida A&M University, and remained a central part of their lives through weddings, divorces, pregnancies, and unprecedented success. Then, life—as it tends to do—drove them apart. Girls Trip follows their reunion, after Ryan, a successful motivational speaker and author, is invited to give the keynote at Essence Fest, the magazine’s annual Fourth of July festival. Ryan invites her closest friends to partake in the mecca of all Black girl vacations, and hijinks immediately ensue. It’s a raucous ride, unlike anything I’ve ever seen in theaters. 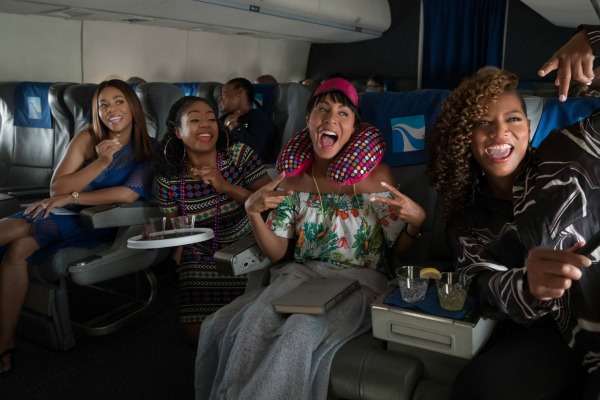 I went to see Girls Trip with one of my closest college friends, a member of my own Flossy Posse, who also attended my historical Black college for women. Like Dina, Ryan, Sasha, and Lisa, our crew has been through it all: Parties that lasted all night; hangovers; late night runs to Cook Out for $5 cheeseburger trays and milkshakes; heartbreak so intense that it felt as if it were a permanent state of being; and fights that kept us apart for months, and sometimes, years. And like the movie’s crew, we’ve found our way back to each other, time and time again, because that’s what sisters do. Black women’s friendships are a vessel that keep us rooted in our truths. We’re unable to hide in the presence of those who’ve seen us at our most vulnerable and picked us up at our lowest points.

Sisterhood keeps us accountable to ourselves by forcing us to reckon with the parts of our lives that we’d prefer to hide. Ryan, for instance, has avoided her friends for five years because she knows they’ll immediately see through her façade. Sasha has kept her secrets close to the chest because she doesn’t want her friends to view her as a failure. But each woman’s willingness to see their friends’s truth, name it, and help them through is what makes Girls Trip so special. Ultimately, the movie’s about the revolutionary act of Black women loving each other, as its co-writer, Tracy Y. Oliver explained.

That camaraderie is sometimes translated on screen, though not nearly as often as it should be: The Color Purple, Waiting to Exhale, Girlfriends, Soul Food, How Stella Got Her Groove Back, Set It Off, Living Single, and now, Insecure, all focus on the magic of Black women’s friendships. As we navigate a crooked room of stereotypes, as Melissa Harris-Perry named it in Sister Citizen, it’s often difficult to see ourselves as we are. When we’re perceived as hypersexual Jezebels, self-sacrificing Mammys, and emasculating Strong Black Women, we’re often hyper-conscious of how we present ourselves. Are we speaking too loudly? Are our outfits drawing too much attention? With our sisters though, all of those inhibitions fall away. 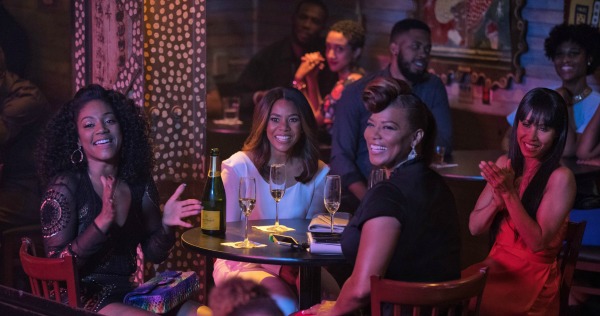 Girls Trip captures that carefreeness, and there’s nothing universal about it. I saw Girls Trip in a sold out theater in Brooklyn, and it was a collective viewing experience unlike anything I’ve ever witnessed. Black women filled 90 percent of the seats, and we communed over these women’s journey toward healing each other and themselves. We laughed together. We cried together. We swooned over fine ass Kofi Siriboe together. We cheered together. We got the inside jokes about Set It Off, another movie about sisterhood that starred Pinkett-Smith and Latifah. Our devotion translated into a $30 million opening weekend, the largest weekend box office for any R-rated comedy released in 2017.

It topped Rough Night, and even had a bigger opening weekend than Bridesmaids, the movie credited with starting the wave of R-rated comedies starring women. There’s nothing surprising about the success of Girls Trip: When Black women are given representation, we show up. We showed up for Waiting to Exhale, helping the “surprise hit” earn $82 million in 1995. We showed up for The Color Purple, earning it $142 million in 1985. We helped Set It Off earn $41 million in 1996. For so long, representation has been so sparse that we clamor for movies, like Girls Trip, that show Black women loving on each other in all ways at all times, despite strife and disagreement and misunderstandings.

It’s also refreshing to see Black women in Hollywood unite to create such a culture shifting movie. As many actresses, including Gabrielle Union and Viola Davis have pointed out, the paucity of roles available for Black women often leads to unnecessary conflict between them. An ensemble cast full of Black women who respect each other, and in the case of Latifah and Pinkett-Smith, have known each other for many years, subverts the idea that Black women can’t be co-stars in an industry that’s hostile toward women of color. Whether or not it’s encapsulated on-screen, Black women know the beauty of sisterhood. It has saved us over and over and over again. Sisterhood is the world’s greatest life forces, and Girls Trip is one of its greatest reflections. 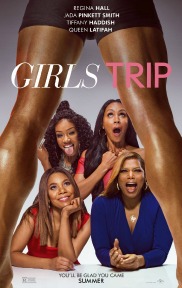 Nearly 15 years later, Set It Off continues to insist on raising the stakes for representations of...