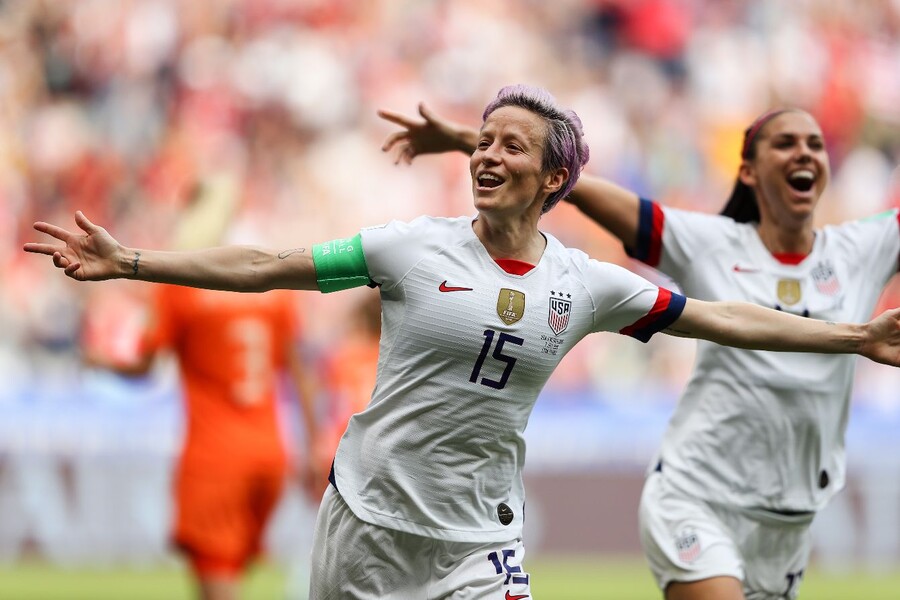 Megan Rapinoe of the USA celebrates scoring the first goal from the penalty spot with Alex Morgan during the 2019 FIFA Women's World Cup France Final match between The United State of America and The Netherlands at Stade de Lyon on July 07, 2019 in Lyon, France. (Photo Credit: Richard Heathcote/Getty Images)

Whenever the Olympics are in session, you can guarantee they will be in the news every day for their entire run. This year, despite the pandemic postponing the sporting event, is no exception. Even before the 2020 Tokyo Olympics began on July 23, 2021, runner Sha’Carri Richardson was in the news. After testing positive for THC, the psychoactive compound in cannabis, Richardson was disqualified from running the 100 meter race in Tokyo. When the U.S. Track and Field team sent in their Olympic roster, she was left off altogether. However, Richardson outwardly accepted her 30-day suspension with grace, noting that she’s human and in the wake of her biological mother’s death she was experiencing a lot of emotions. While unable to compete in Tokyo, to the outrage of many, Richardson plans to compete in the 2024 Olympic Games in Paris.

Richardson trended for several weeks, but over opening weekend, Megan Rapinoe, U.S. women’s soccer player, made headlines for supporting her sister’s business selling CBD products, the second active ingredient in cannabis. Use of marijuana, the plant that creates both THC and CBD, is banned according to the World Anti-Doping Agency (WADA). That ban is the reason the U.S. Anti-Doping Agency (USADA) suspended Richardson from competing in the Games. Though the WADA has changed their policy to be more lenient and allow for up to 150 nanograms per milliliter of THC, marijuana is still banned for violating the spirit of the sport and allegedly affecting performance. CBD, on the other hand, isn’t banned because it isn’t considered psychoactive. In other words, it doesn’t enhance an athlete’s performance, but, then again, neither does THC.

The argument isn’t that Richardson shouldn’t have been suspended for breaking a rule. The time for that has long since passed, but Richardson and Rapinoe present an interesting double standard in rules of the Olympic Games. Richardson, a young Black woman, is banned for ingesting THC, while Rapinoe, a more established white woman, openly promotes ingested CBD, a calming ingredient in marijuana removed from the WADA list of banned substances in 2017, for training. The question now becomes: Who gets away with what and why? The Summer Olympics draw international attention every four years. In the midst of a pandemic, the Games have proven to be even more monumental as Tokyo sets rules to slow the spread of COVID at a superspreader event. Sadly though, the pandemic is falling to the backburner as Richardson isn’t the only one facing negative effects of the Olympics’ many double standards. These indiscretions happen daily for many female athletes, Black and Brown athletes, and disabled athletes, but on the world stage of the Olympics and Paralypics, they’re blinding. For example, the Norwegian women’s handball team were fined for refusing to wear bikini shorts. When they played Spain on Sunday, July 25 in longer shorts, pop singer Pink offered to pay the fine for them. Alice Dearing, the first Black swimmer to represent Great Britain in the Olympics, was told she couldn’t wear SoulCap, a swimming cap designed for natural hair, and deaf blind swimmer Becca Meyers left her spot on Team USA because she isn’t allowed her own personal care assistant, someone she needs to be able to trust.

Even in sports, white women get away with more than Black and Brown women, and white men get away with even more. In May 2021, six female fencers, two of whom are Olympic athletes, wrote to the U.S. Olympic and Paralympic Committee (USOPC) asking them to ban Alen Hadzic from the Olympics for allegedly sexually assaulting numerous female fencers. Hadzic was suspended in early June, but when he appealed his case, the U.S. Center for SafeSport overturned his suspension. Apparently, allegations of sexual assault don’t harm the reputation of the United States or fencing as a sport. Instead of banning Hadzic, the USOPC simply rerouted him. Hadzic flew on a separate plane and stayed in a remote hotel not connected to the Olympic Village. Supposedly, this decision keeps women Olympians safe while minimizing distraction, but wouldn’t banning him have accomplished these same endgoals? While he’s only an alternate, his presence in Tokyo ignores the fact that his female teammates do not feel safe around him. It ignores the fact that he was suspended from Columbia during the 2013-14 school year due to a Title IX investigation, citing a history of assault. Separating Hadzic from the other athletes and barring him from the opening ceremony does little actual good if the goal is to minimize distraction. In fact, the whole suspension and appeal was probably enough distraction in the months leading up to the Games.

Hadzic’s white male privilege is shining through. SafeSport has been accused of overlooking allegations against him and other white, male athletes and being underfunded since its formation in the wake of Larry Nassar being convicted of committing numerous sexual crimes against gymnasts. And yet, Hadzic is still allowed to be an alternate. Rapinoe is still allowed to promote CBD, and even though leaders are willing to make reconsiderations regarding the use of marijuana, the Olympics is still inconsistently enforcing the rules. All athletes, regardless of ability, race, or gender, should be treated fairly and those rules should be reevaluated when they no longer fairly represent the ever-changing world. This is true for all of us in all scenarios—and most especially during an international sporting event that has the whole world watching.

Read this Next: Pains of Fame 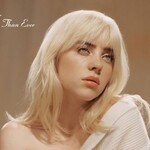 by Danielle Chelosky
In spite of everything, Billie Eilish has managed to retain her sense of self.