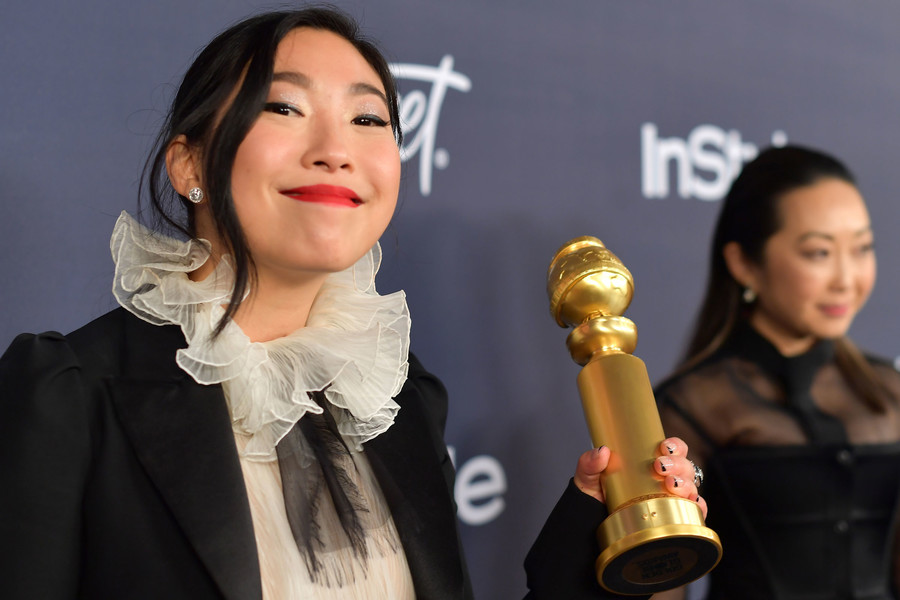 The 2020 Golden Globes aired on January 6, bringing a few changes and keeping a lot more of the ceremony the same. Though the Golden Globes made progress around inclusion in 2019, it still has major issues with diversity; we found ourselves watching as the bland, unfunny Ricky Gervais took to the stage to host a show that made minor waves compared to the once strong cultural impact of the award’s show. But there were small moments of light amid the white, male-dominated event, and we elected to collect a series of points and counterpoints to further explore the Golden Globes in hopes that, maybe, in 2021, we can anticipate a real shift not just toward diversity, but in inclusion and excitement in both the people behind the event, and those that take to the stage.

Awkwafina made history, winning Best Actress for her role as Billi in The Farewell and giving the predominantly Asian cast a much-deserved moment in the spotlight. Prior to her win, only seven women of color and six men of color had won in the Best Actress and Best Actor categories, respectively. Since the very first Golden Globes.

Counterpoint: Awkwafina’s stepped into the spotlight thanks in part to her appropriating African American Vernacular English (AAVE).

Much of Awkwafina’s career has been the result of a long-held persona where she appropriates AAVE. This was especially visible in her role as Peik Lin in Crazy Rich Asians. As Muqing M. Zhang writes in Colorlines, “Asian Americans resent the model minority stereotype because we often feel it obscures our suffering and flattens our humanity. Thus, some seek to break out of that mode not by questioning the class and racial hierarchy that we are deeply complicit in, but by extracting Blackness. Awkwafina has even said that she got into hip hop, and her associated persona, because there was something ‘subversive about hip hop.’”

Point: Michelle Williams spoke with pride about her abortion.

Michelle Williams won Best Actress in a Limited Series for Fosse/Verdon, and used her moment wisely: “I wouldn’t have been able to do this without employing a woman’s right to choose. To choose when to have my children and with whom, when I felt supported and able to balance our lives, as all mothers know that the scales must and will tip towards our children.” Despite pushback from anti-choicers online following her speech, it’s an important reminder that reproductive access is one of the most vital issues of our time.

She said that women need to vote in the 2020 election so that women can retain access to abortion and reproductive healthcare, saying, “So women 18 to 118, when it is time to vote, please do so in your own self-interest … Don’t forget we are the largest voting body in this country. Let’s make it look more like us.” But women, specifically white women like Williams, did vote in the 2016 election—and many of them voted for Trump.

Though the Golden Globes made progress around inclusion in 2019, it still has major issues with diversity.

Kate McKinnon is an openly lesbian comedian who has even starred in Saturday Night Live skits about being a lesbian. Some would argue that she owes much of her career success to the path that Ellen DeGeneres blazed in 1997 when she announced in a two-part episode of her eponymous ABC series that she’s gay. DeGeneres’s “coming out” sent her career into a tailspin. Though Ellen later earned two Emmy Awards and a Peabody Award and DeGeneres earned a GLAAD Media Award, she faced backlash from a number of right-wing groups, including the American Family Association, and her show only aired for one more season before being canceled. Though DeGeneres rebounded, launching her talk show in 2003, and becoming one of the most influential comedians in Hollywood, her bravery inspired McKinnon to be herself.

During the Golden Globes, McKinnon presented the Carol Burnett Award to DeGeneres, given to the latter as a lifetime achievement token for all of her contributions to television. McKinnon’s touching speech underscored the importance of representation for people who’ve been historically marginalized in pop culture and beyond: “[Ellen DeGeneres] risked her entire life and her entire career in order to tell the truth, and she suffered greatly for it. Of course, attitudes change, but only because brave people like Ellen jump into the fire to make them change. And if I hadn’t seen her on TV, I would have thought, ‘I could never be on TV. They don’t let LGBT people on TV.’ And more than that, I would have gone on thinking that I was an alien and that I maybe didn’t even have a right to be here. So thank you, Ellen, for giving me a shot.”

While award ceremonies aren’t the best gauge for determining the importance of TV shows and movies, who is nominated and awarded does reflect Hollywood’s broader attitude about what matters. In that respect, the Hollywood Foreign Press Association fumbled once again: No women were nominated in the Best Director category, though Ava DuVernay’s When They See Us and Lulu Wang’s The Farewell were some of the best that TV and film had to offer in 2019. HBO’s Euphoria, which offered one of the most realistic depictions of teenagers in recent years, was snubbed entirely, and once again, the entire nomination pool was overwhelmingly white. Despite these odds, Ramy Youssef and Awkwafina both walked away with gold statues for their work in Ramy and The Farewell, respectively, but inconsistently awarding people of color isn’t progress. It’s pandering, and it will not lead to more projects being greenlit from people from marginalized communities.

Read this Next: The Oscars will be Good and Distract From These Terrible Times

Eat or Be Eaten

BitchTapes: And the Oscar Goes To...