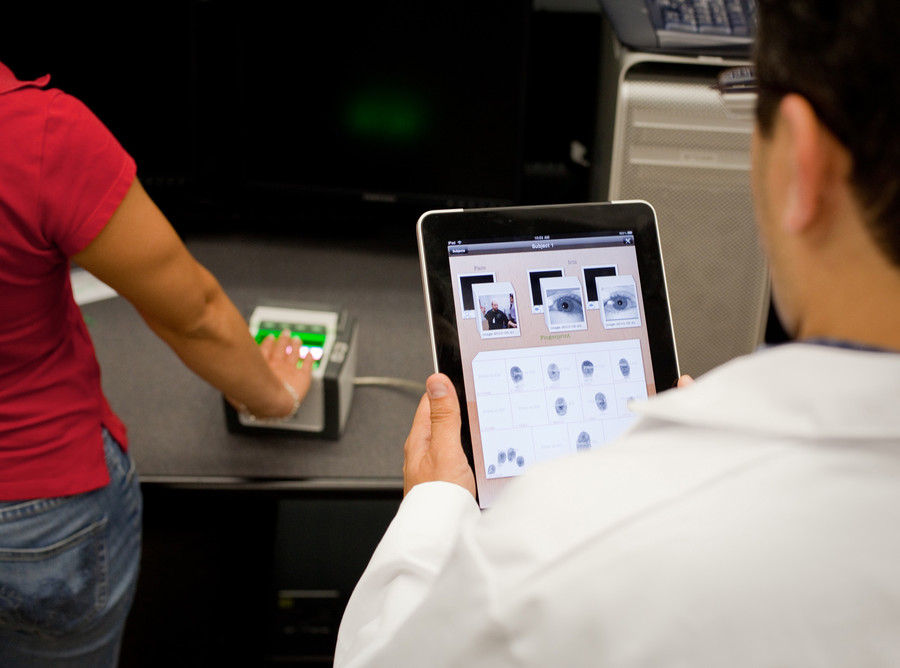 On October 21, 2019, the Department of Justice announced that it would begin collecting DNA samples from detained asylum seekers and other immigrants, only 19 days after the Department of Homeland Security (DHS) announced its plan to test the DNA of detained immigrants and refugees and store it in an increasingly expanding FBI database. The two announcements were the culmination of a perfect storm of long-term lobbying by major defense contractors, Silicon Valley’s growing investment in a “virtual” border wall, and a xenophobic sentiment that fuels policies in the United States and strips undocumented people of their rights while they’re incarcerated in privatized detention centers for indefinite periods of time.

It’s not news that immigrants and refugees in the United States regularly face dehumanizing conditions, but the growing interest in their biometric data is a fairly recent development. According to the Biometrics Research Group at Michigan State University, biometric data is “the automated recognition of individuals based on their anatomical and behavioral characteristics such as fingerprint, face, iris, and voice.” The collection of diverse biometric data—through fingerprinting, iris scans, and more—is “valuable” because it yields more accurate results with more nuanced data. For instance, a fingerprint can yield inaccurate results, while an iris scan can be more precise.

But while undocumented immigrants continue to be undervalued and underpaid in the  domestic, culinary, and agricultural fields in the United States, there’s a new economic value to undocumented biological data: Surveillance technology and biological data on the U.S.–Mexico border is a booming industry that Truthout estimates will be worth $740 billion by 2023. But courts still haven’t determined who owns the biological data of undocumented people, which means that arresting and deporting undocumented people has become lucrative because their biological, biometric data can be mined, harvested, and used to generate profit.

The Lucrative Business of Biometric Data

In March 2018, Congress approved a $1.3 billion budget to build 1,954 miles of the border wall, with $400 million dedicated to the Smart Wall that monitors the U.S.–Mexico border using existing and newly developed technologies. The “wall” uses surveillance to “catch” undocumented people in new ways. For example, the Silicon Valley start-up Quanergy is using Lidar technology—the technology used to build self-driving cars—to capture three-dimensional imagery of people walking along the South Texas border. Different versions of a virtual wall has been in the works since the 1970s, when border patrol began using ground sensors to detect immigrants crossing the border; in 2006, the Department of Homeland Security’s Secure Border Initiative negotiated a $30-billion deal with Boeing to build SBINet, a sophisticated combination of detection and communication technologies. (The project was killed in 2011 because it was considered poorly managed and much of the technology was defective.)

But interest in harnessing technology for border control has been revived thanks to a new wave of venture-capital backed technology firms in Silicon Valley. The United States began DNA-testing immigrants, mostly from Mexico and Central America who’d crossed the U.S.-Mexico border in 2018, around the time the rest of the country learned that children were being separated from their families in immigrant detention centers, often with no attendant documentation records. The DNA-testing businesses 23andMe (owned by Google), and MyHeritage offered genetic-testing kits to the U.S. government to reunite the families, with the guarantee that they would protect the privacy of those tested. The Texas-based immigrant and refugee-rights group RAICES expressed concerns over the privacy of that data and the implications of the U.S. government owning it indefinitely.

Still, in May 2019, ICE began using rapid DNA testing, which provides results in 90 minutes, at the border, to allegedly identify individuals who were not related through biological parent-child relationships. According to the digital–civil-rights organization Electronic Frontier Foundation, ICE has contracted ANDE, a Massachusetts-based rapid DNA testing company, to manage the data for those kits. In the past year, biometric scanning has made national news as some U.S. airports began using facial-recognition systems that are scheduled to become part of standard security screening at all airports by October 2020. But such data is also increasingly part of everyday life—facial-recognition technology that unlocks your phone, fingerprint scans that let you purchase your morning coffee as quickly as possible, etc.

Those who purchase DNA-testing kits like those from 23andMe can opt in to data research and sharing. But privacy law doesn’t protect consumers’ full ownership of their DNA information. The Genetic Information Nondiscrimination Act (GINA) of 2008, which protects consumers against genetics-based discrimination, primarily from employers and health insurers, is the most extensive federal policy that covers DNA. State laws, like the California Genetic Information Nondiscrimination Act (CalGINA), extended protection in emergency medical services, housing, mortgage lending, education, and other state-funded programs. But the DNA testing currently used at the border is uniquely conducted through federal agencies with the power to supersede state laws and the protection of sanctuary movements.

Beyond that, there’s a long racist history of underrepresented people’s data being collected and classified for the purpose of further oppressing them. Virginia Eubanks, a professor of political science at the State University of New York at Albany and author of 2018’s Automating Inequality: How High-Tech Tools Profile, Police, and Punish the Poor, notes that IBM’s punch-card system was one of the earliest technologies used by Nazis to identify, track, and classify Jewish prisoners at Auschwitz. In more modern times, the Google search algorithm traffics in what Dr. Safiya Noble, an Information Studies professor at the University of California, Los Angeles, calls “technological redlining,” a practice where data is used to discriminate against people of color based on algorithms and networks, leading to the denial of such life necessities as loans and medical claims.

Facial-recognition software regularly evinces built-in racist and sexist biases, making the technology more likely to misidentify people of color and women and leading to an uptick in the racial profiling of Black people. Dr. Ruha Benjamin, an African American Studies professor at Princeton University, also points out that the way data is extracted—for instance, the physical body being used for medical information and testing—can also lead to racial discrimination. The physical bodies of communities of color in the United States have long been used as “data” in the name of medical research and scientific discovery conducted for the “public good,” without consent or ownership over their own biological data. Most famous are perhaps the HeLa Cells, which belonged to Henrietta Lacks, an African American woman who died at Baltimore’s Johns Hopkins Hospital in 1951 from a malignant tumor on her cervix.

Doctors at Johns Hopkins took a sample of those cells without her consent, and for the first time in medical history the cells continued to live on and duplicate. The HeLa cells were responsible for massive discoveries in research, cures, and innovations in medicine, and each time a new discovery was made, the cells were patented, leading to 17,000 U.S. patents that have made billions. Over the years, Lacks’s estate has attempted to gain some proprietary right to her cells, but to date, the Lacks family hasn’t been compensated for HeLa cells, and Lacks still has no postmortem proprietary right to her cells. Enter biometric scanning at the U.S. border and within all detention centers: When brought together, the classification and mass cloud storage of undocumented people’s DNA is a crisis of information gathering as a means of control and unethical testing for what could be the largest database of biological information in the United States.

The Office of Biometric Identity Management (OBIM) estimates that DHS will have conducted face, fingerprint, and iris scans of at least 259 million people in the biometric database by 2022. This revived virtual border wall created a booming grab for virtual wall contracts—now undocumented people can be fully biologically mapped, which could lead to immigrants and refugees being targeted without having ownership over their biological data. These companies are building off of the expansive “criminal” databases managed by Palantir Technologies, Inc., that local, state, and federal law enforcement have been using for decades.

When brought together, the classification and mass cloud storage of undocumented people’s DNA is a crisis of information gathering as a means of control and unethical testing for what could be the largest database of biological information in the United States

In 2018 in New Orleans, for example, it was revealed that Palantir has been using predictive analytic software, or “crime forecasting,” on the community since 2012. That system used networks between people, places, cars, weapons, addresses, social media posts, and other information to determine who to surveil through a system that mimicked New York City’s contentious “stop-and-frisk” policy. Palantir’s Gotham, a software program that holds a web of information that leads to profiling communities of color, network information and profiling to inform who ICE should target in deportations next. Palantir’s databases have been built to use predictive analytics that primarily leads to policing people of color by law enforcement agencies throughout the country. But this long standing, well-funded relationship with Palantir is the beginning and foundation of the recent expansion in building a digital border wall, which heavily relies on collecting biological information.

Corporate investment in aiding ICE include some of the biggest tech companies as well as startups. Amazon Web Services acts as a federally authorized cloud service, holding 22 percent of federal authorization under the FedRAMP program, and 62 percent of the highest-level authorizations to handle immigration data. In 2015, DHS began collaborating with newer tech startups in Silicon Valley specifically to “reshape how government, startups, and industry collaborate to find solutions for homeland security use-cases.” Silicon Valley companies like Quanergy now physically frequent the Southwest borderlands for test projects. The National Immigration Project, the Immigrant Defense Project, and Mijente drafted a comprehensive report in 2018 on the tech and data companies invested in ICE. This report found that some of the largest tech companies based out of the United States—from Amazon to Google, have investments in undocumented people’s data.

The EFF has a number of campaigns that advocate against the use of biodata and algorithms for racial profiling and policing communities of color. The Our Data Bodies Project has published a Digital Defense Playbook in English and Spanish as a know your data rights data guide. Activist scholars such as Benjamin are creating resources that demonstrate the extent to which people of color are surveilled, and how to protect their data. We can also demand that the Senate bills S. 2462 and S.823 move forward to protect citizens and undocumented people from borderland surveillance, prioritizing undocumented people’s biodata rights in the United States. As the Trump administration and the Department of Justice continue to heavily invest in surveillance technology on the U.S.–Mexico border, the value of immigrant and refugee biological data will continue to grow, and an industry will continue to take shape around the economic value of their policing. Advocacy and policy in favor of undocumented people’s rights must lead in the fight for the right of all people to data privacy. 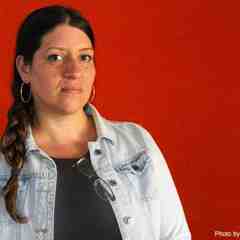 Dr. Melissa Villa-Nicholas is an Assistant Professor at the Harrington School of Media and Communications and Graduate School of Library and Information Studies (LIS). Her research and writing include the history of Latinxs with information technologies and information spaces, Latinx socio-techno practices, and critical information and technology studies.