In Season 6, “Grace and Frankie” Loses Its Hook | Bitch Media 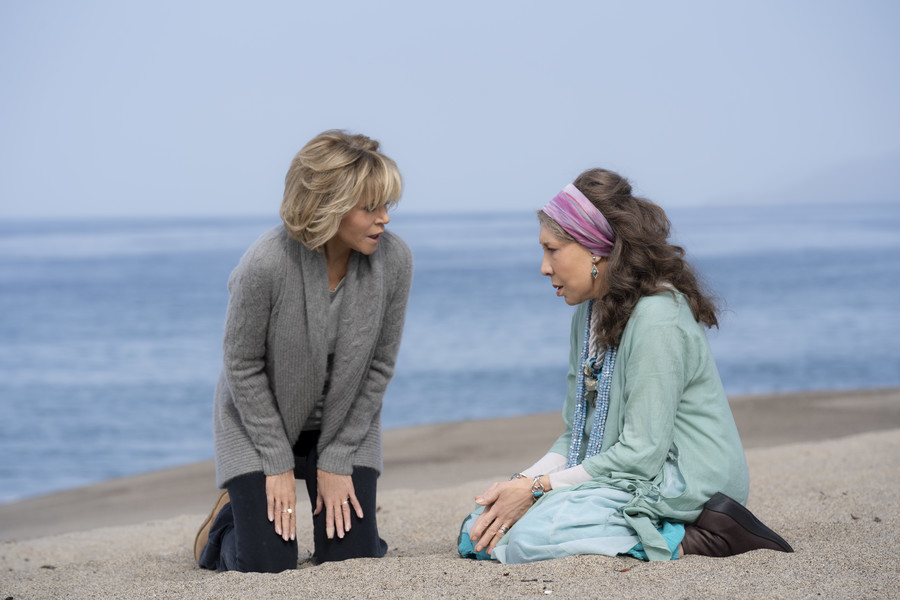 Jane Fonda as Grace and Lily Tomlin as Frankie in Grace and Frankie (Photo credit: Netflix)

Grace and Frankie is at its best when it follows its tried and true formula: two very dissimilar older women develop a deeply trusting friendship that allows them to talk regularly and openly about sex and romance and about life after their husbands divorce them to marry each other. When the show pivots to explore the worlds of its other characters, including Frankie’s (Lily Tomlin) ex-husband Sol (Sam Waterston), Grace’s (Jane Fonda) ex-husband Robert (Martin Sheen), and Frank and Gracie’s children, it feels as if the show’s writers are tugging in different directions, attempting to widen a show that works best when it’s focused on its primary protagonists.

After all, a show about two aging women relearning how to date and be in relationships after their husbands leave them is much more interesting to watch than a show about two families navigating an array of small and big events in their lives, including weddings, threesomes, and baby showers. Family comedies are a dime a dozen on broadcast, cable, and streaming networks, but a show with a premise like Grace and Frankie’s feels intimate and distinct. For the first three seasons, we maintain that intimacy, following the women as they go from disinterested acquaintances to friends, friends to business partners. But that shifted in Season 4 as the rest of the cast gained more screen time. And in its penultimate season, the show attempts to cover a lot: Grace has married her wealthy but much-younger lover (or in Frankie’s words, she’s “real-deal married to this man”), though she’s now facing myriad health issues.

There’s a new engagement; couples reconcile and then separate again; Grace and Frankie launch a new product and softly critique capitalism; and the show again brings the relationship between aging and disability to the forefront in a number of relatable, funny ways. Though Season 6 focuses more on Grace and Frankie, making the plot more sure and locked in, it still feels squeezed, as if the show knows its ending and is therefore trying to cram a lot into a 13-episode season. There’s not enough time for everything the show wants to cover, but they try to give it to all us anyway, which disrupts the pacing. And still, Grace and Frankie feels more like a lighthearted sitcom about two families rather the buddy comedy it was originally billed as.

Just as in previous seasons, Sol and Robert are bland and uninteresting; their fights are repetitive and stereotypical and Robert is still difficult to root for. His criticism is sharp, rude, and snobbish, and Sol and Robert’s relationship continues to feel more businesslike than a marriage softened by love and acceptance of each other. Though Sol and Robert protest discrimination against same-sex couples, their status as an old, wealthy, white, gay couple is still less impactful than the platonic relationship between Grace and Frankie, two old women who love each other, love themselves, and are continuing to explore their sexualities in a society that pushes sexlessness on women the moment they hit 40, decline to hide their grays, or refuse to needle at their wrinkles.

Simultaneously, we watch as Frankie experience romance and love, a space perhaps less well-trodden than her sex life, which appears to be open and flexible. Frankie finds love with her “yam man” Jacob (Ernie Hudson) and we’re offered insight into her struggles with that relationship as she tries to decide what she wants their lives together to look like; then, we see her new relationship, and, ultimately, a strong point in the show: the moment where both Jacob and her new boyfriend fight for her. How often have we seen an older woman so surrounded by love and thirst?

In contrast, Sol and Robert have conflicts that feel flat, despite the fact that their conflicts would be massive in real life. They argue over money and what to do with their savings; they argue over health and how the other is taking care of themselves; they still argue over their now-platonic relationships with Grace and Frankie. But their interiority is flat and dull compared to the sparkling, empathy-earning interior worlds of Grace and Frankie. It’s hard to care about Sol and Robert when we have Grace and Frankie stealing the limelight, their feelings well-explained and explored on screen. Similarly, it can be difficult to care about their children.

Mallory (Brookyn Decker) and Brianna (June Diane Raphael), Grace and Robert’s children, and Coyote (Ethan Embry) and Bud (Baron Vaughn), Frankie and Sol’s children, get more screen time as the show progresses, exploring their own love lives, conflicts, and relationships with one another, but, for the most part, they still pale in comparison to the storylines of Grace and Frankie, leaving me wishing we could just stick with the duo instead of continuing to expand.

I’ll admit though, June Diane Raphael performs a stunning Brianna, making me laugh often via her snarky sense of humor and refusal to function under really any norms of what a woman, or girlfriend, should want, something that continues to lead to drama and stress on the part of other characters, especially her boyfriend, Barry (Peter Cambor). We end the season with the understanding that even more change is coming, and that we can expect to see more of Sol and Robert. It’s a new arrangement (one I won’t spoil here) that has me nervous about the final season of the show: Given that there will be more Sol and Robert heading our way in Season 7, I’m nervous that we’ll get even less of Grace and Frankie. If so, I worry the show will end on a weak note that forgets to prioritize its titular characters—the ones that hooked us to begin with.