Fandom is FeministQueering Boy-band Obsession in “Grace and the Fever”

I came of age in the heyday of the Backstreet Boys and ’N Sync, and I thought they were cheesy as hell. Twenty-four years after BSB formed, I read Zan Romanoff’s novel Grace and the Fever and finally learned to appreciate that boy-band fandom comes from an understandable and—more interestingly—feminist place. Meeting Jes is a dream come true for Grace because she has been blogging fanatically about the band for years. Thankfully, the novel never completes the cheesy romance the setup anticipates. Jes is taken with Grace because she gives him a glimpse of a “normal” teenage life while Grace’s interest is more about observing what she’s been obsessively speculating about online.

But “never meet your idols” is ominously emblazoned on the novel’s cover because her fantasy appropriately crashes down. Grace is swept up in the Fever Dream speculation mill, giving her a sobering glimpse of the dark side of stardom. Grace is fixated on the idea of “Lolly”—a fan-created theory that Fever Dream members Land and Solly are a closeted gay couple.

Grace and The Fever is delightfully queer in a way I wish more novels were. In a touching subplot, Internet fangirl “Jadeonfire” explains in a Tumblr post that she realized her own queerness by observing Land—specifically, the way his romantic interest in women always seemed forced. She concludes the post: “This is the story of how I looked at Lolly and saw myself. …Lolly is real. And it helps me remember that I am, too.”

Land never provides the slightest indication that he’s queer, but fandom is about creating fantasies for one’s own benefit. Throughout the novel, rumors swirl about management keeping Lolly’s sexuality quiet. “Lolly ‘shippers’” hate the idea that the men in charge are preventing the boys from openly acting on their love. In this sense, management is monitoring the boys’ sexuality in the same way society monitors young girls’.

Boy-band members, author Zan Romanoff told me, are the only men held to the same purity standards as women. They must be “desirable but gently unattainable,” perform but not inhabit their sexuality. Lolly presents this notion at its most pronounced—sexy men who present zero bodily threat.

In a recent a Rolling Stone feature, One Direction’s Harry Styles was asked if he’s worried about proving himself to an older crowd since his fan base has primarily been young women.

He responded: Who’s to say that young girls who like pop music – short for popular, right? – have worse musical taste than a 30-year-old hipster guy? [….] How can you say young girls don’t get it? They’re our future. Our future doctors, lawyers, mothers, presidents, they kind of keep the world going. Teenage-girl fans – they don’t lie. If they like you, they’re there.

Harry’s unabashed celebration of teenage girls affirmed Grace’s feminist underpinnings. What other men are sticking up for the tastes of teenage women? In the novel, Grace meets Katy, a slightly older Internet friend who guides her through her tumultuous senior year. In one of my favorite scenes, Grace tells Katy she’s worried about the potentially detrimental impact of her Fever Dream obsession: “Do you ever feel like being in fandom has, I don’t know, warped you?” Katy’s response captures a major theme of the book:

“People always try to pretend like fandom is some freaky subculture, but honestly, I don’t think it’s that far off from what most people do with celebrities, or even, like, the people you don’t know well at school, you know? It’s so hard to understand that other people are people, so we create them for ourselves. We create whole worlds to live in and that’s fine.… [I]t’s especially necessary if you’re a teenage girl living in a patriarchal culture.”

This paragraph spoke to me. Like Grace, I have a tendency to idolize, to mythologize, and to feel more at ease from behind the comfort of a screen. I’d never seen my proclivity toward fandom as gendered, but it makes sense. As our agency is constantly being chipped at, women find comfort in worlds of our own creation. The way Katy emotionally soothes Grace in such a short, unpretentious sentence reflects the novel as a whole.

Breezy and unassuming on the surface, Grace and The Fever crackles with sharp cultural commentary and deep emotional resonance underneath. In the end, it’s clear that Grace’s fandom wasn’t about Fever Dream. It’s rather about creating and nurturing a fantasy world that gives her the courage to put her other foot in the real world.

And isn’t that what fiction is all about? 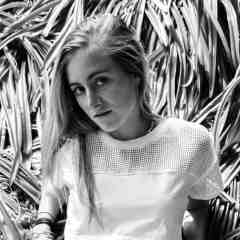