For “Great British Baking Show” Contestants, The Real Loss is the Endless Trolling 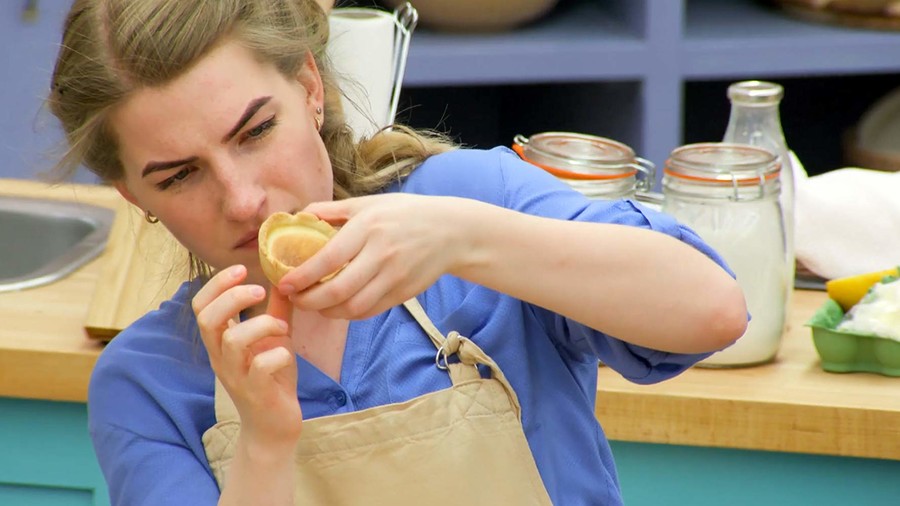 Julia Chernogorova on Season 8 of The Great British Bake Off (Photo Credit: BBC)

Against the vast backdrop of high-octane and anxiety-inducing cooking competition television programs, The Great British Baking Show is an aberration. Internationally beloved for its affable contestants and endless supply of baking-themed anglicisms—“soggy bottoms” and “saucy puds” abound—the show follows a dozen or so home bakers as they compete to be named Britain’s best amateur baker. When the 2019 season premiered with a record-breaking 9.6 million viewers, each contestant was thrust into the public eye; most have racked up tens of thousands of Instagram followers since the season began in August. For American audiences in particular, The Great British Baking Show’s intrinsic wholesomeness makes it a cultural phenomenon: We could never be so well-mannered in a televised competition, but we do enjoy pretending.

The Great British Baking Show is, at most, an estranged cousin to American cutthroat cooking competitions like Chopped, Iron Chef, or even Cupcake Wars. In the Baking Show tent, contestants help each other finish their bakes, are graceful (even grateful!) in defeat, and despair when their purported rivals are dismissed from the competition. Each episode is predicated on kindness, love, support, and the freely-given home-baked comforts of the feminine domestic realm. Even the grand prize—a cake stand and some flowers, no cash—highlights the show’s near-pathological humility. Produced by a team called Love Productions, decency is, we can only assume, woven into the show’s DNA. But when Baking Show airs on TV, long after the last bun is iced and the final bap prodded, the trolling begins.

Each season, the bakers spend months immersed in icing sugar, bavarois, and ganache, frantically preparing for the 30 challenges of the competition. In addition to the generalized stress of executing difficult pastry skills while trying to impress professional judges on an international stage, the bakers are told by producers that they’ll likely deal with some backlash from a handful of disproportionately peeved viewers. After all, it’s a competition. But the backlash goes beyond competition, and, despite the warning, most bakers are blindsided by the frequency and ferocity of their trolling. And though adoring fans are certainly in the majority, online trolls yell the loudest. Stacey Hart, a Season 8 semifinalist, dealt with severe online harassment as soon as the season began airing. “I’m smug, I’m a bitch, I’m a worthless piece of shit, I’m a useless baker,” Hart told Bitch, describing the comments that strangers sent her. “[The show] was the best experience and the best thing—at the time—that I ever did. It became the worst thing I ever did.” Trolls loathed her pink, glittery bakes and how often she brought up motherhood; their caustic DMs and comments drove her into a months-long depression. “I’m quite a self-conscious person anyway, and it made me question myself,” says Hart. “Am I good enough?”

Before Hart, there was Ruby Tandoh, a Season 4 runner-up who was deemed a “filthy slag” who traded sexual favors and weaponized “female tears” for preferential judging. Tandoh wrote a piece for The Guardian in October 2013 describing the waves of “lazy misogyny” that followed each episode’s release, but shining light on the problem change much for future contestants. Claire Goodwin, the first to leave the tent in Season 5, was inundated with fat-shaming comments. Season 6 winner Nadiya Hussain, a first-generation British Bangladeshi, was told to “go home” on Twitter. Candice Browne, winner of Season 7, regularly endured comments from strangers who “fucking hate Candice, reckon she’s a right bitch.”

In a 2018 joint study with Element AI, Amnesty International named online trolling of women a human rights violation—one that social media platforms like Twitter continuously refuse to be held accountable for. The trolling of Baking Show contestants generally reflects the Amnesty International findings: White women are trolled hard, but women of color are trolled harder. Commenting on the viciousness of a particularly nasty troll, Hussain offered a succinct explanation: “I’m Muslim, brown, working-class and a woman! I may as well have ‘punching bag’ written on my torso.” In general, men are less likely to be trolled and, instead, are more likely to be trolls themselves, due to years of learned misogyny and—according a Brunel University and Goldsmiths, University of London report—a higher rate of narcissism. But on Baking Show, trolling often extends to the men with nearly as much vitriol and regularity as it does to the women.

Dan Beasley-Harling, a 2018 contestant and self-identified “gay-at-home dad” received the overwhelming bulk of Season 8’s cumulative harassment. “It was about five weeks of people just saying horrible things about me constantly. I had some really overtly homophobic comments,” says Beasley-Harling, referring to unoriginal jabs about queer sex and the suitability of a queer parent. Trolls can generally find a problem with any woman, but two types of bakers stand out as exceptionally deserving of harassment: women who don’t land neatly in the realm of palatable, perfect femininity, and men who aren’t stereotypically masculine. Beasley-Harling’s experience suggests that Baking Show trolls might take a more nuanced approach to their vocation.

Perhaps it’s not just about harassing women online—it’s about re-establishing gendered power dynamics and punishing those who flirt with the domestic on public-facing platforms. Domestic work has historically been an unpaid at-home venture delegated to women, so Baking Show contestants are either women overstepping their household boundaries or men crossing gendered labor lines. For a troll, either is a damnable offense. But with each record-smashing episode, Baking Show subverts the assumptions of where femininity belongs, who it belongs to, and how much it’s worth—roughly £24.2 million in predicted revenue. Still, exploitation is often and easily disguised as empowerment. Lest we forget, Baking Show contestants aren’t paid, and the grand “prize” has little to no real-world value.

Trolls can generally find a problem with any woman, but two types of bakers stand out as exceptionally deserving of harassment: women who don’t land neatly in the realm of palatable, perfect femininity and men who aren’t stereotypically masculine.

To an extent, we all participate in the uninformed and unkind public judging that trolls have championed. We experience celebrities and public figures—especially women—as dehumanized subjects ripe for public dissection, each one existing in a vacuum sealed behind a screen. After all, the Baking Show contestants are filmed, edited, and packaged by professionals into easily digestible archetypes for the sake of a comprehensible and compelling storyline. For example, the latest season featured Michael Chakraverty as the optimistic goofball, Steph Blackwell as the irrationally insecure savant, and Helena Garcia as the spooky, whimsical free spirit. While these personas are fully inspired by who the bakers actually are, they’re ultimately deployed to create drama and tension where it doesn’t exist—that’s just the mandate of reality-TV editing.

But trolls live in the extreme, and for them the editing spurs online abuse. Beasley-Harling, for example, saw the trolling as a direct extension of Love Production’s editing. “I felt like the editing choices were very much treating me like collateral damage,” Beasley-Harling says. “I phoned Love Productions and said, ‘I don’t think you’re representing me fairly, I understand why people don’t like me.’ And they said, ‘No, you’re crazy, everyone’s getting a fair, balanced view on the show. It’s all in your head.’” Gaslighting, the Old Faithful of emotional abuse is regularly deployed against women, people of color, the LGBTQ community and other marginalized groups, is remarkably efficient at restabilizing power dynamics—exactly what trolls seek to do. A representative for Love Productions stated via email that: “Love Productions has always taken contributor care seriously and has robust protocols in place to protect and support those taking part in our shows throughout production and after transmission. These protocols evolve to acknowledge and address the changing media landscape and scrutiny.”

Depending on who you ask, however, the robustness of their protocols fluctuates. According to Beasley-Harling, past contestants have speculated that the Love Productions team tailors their level of attention and support based on the profitability of the contestant in question. After leaving the tent halfway through the competition, Beasley-Harling felt like Love Productions was less interested in protecting its contestants from trolling when money was to be made elsewhere, a behavior not dissimilar to reality television at large. “I barely left my house for three months. I was a shitty parent for three months,” Beasley-Harling says, describing the impact of his trolling. “To me, that felt like, ‘We’ve used you for the entertainment value and now we’re disposing of you.’” But Hart, the semifinalist who received the brunt of Season 8’s trolling and suffered a depressive period similar to Beasley-Harling’s, found Love Productions reassuring throughout airing.

“Every time I called them, they were wonderful. Didn’t matter what time of day,” says Hart. But she does concede that the emotional scarring from her online abuse outlasted Love’s self-proclaimed robust protocols. “They’ve got no idea how it’s affected me to this day,” says Hart. “I don’t think that’s their problem anymore, is it?” It remains to be seen how this year’s cohort of bakers will fare. Airing in the United Kingdom continued through October, and this year’s crop of bakers appear as chipper as ever, even online. So far, trolling appears to be minimal—maybe the bakers can avoid it if they subscribe more closely to normative gender expectations. “When I went on the Bake Off I wasn’t worried about my hair or my makeup or what I was wearing,” says Hart. “Maybe if I had made more of an effort, people would have been nicer to me.” 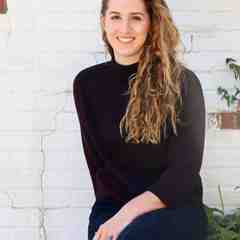 Rae Robey is a DC-based food writer and the special projects manager at Pineapple Collaborative, a feminist collaborative for womxn who love food. Find her on Instagram at @raerobey.