Grown-ish, Freeform’s Black-ish spinoff, explores the experiences, worldviews, and values of Generation Z through the eyes of Cal U freshman Zoey Johnson (Yara Shahidi) and her eclectic group of friends. Through fast-paced and occasionally disorienting storylines, the show navigates sex, complicated friendships, romance, and the effects of drug use while centering Johnson’s quest to figure out who she is. However, in the episode “It’s Hard Out Here for A Pimp,” Grown-ish focused solely on Jazlyn Forster (Chloe Bailey) and Skylar Forster (Halle Bailey), twin track stars from the “hood” who are struggling with dating at a predominantly white institution. The show argues that their dating struggles are indicative of the often racist politics of desirability.

“It’s Hard Out Here for A Pimp” opens with Black men routinely looking past Jazz, Sky, and other equally dumbfounded Black girls in a nightclub, instead approaching lighter-skinned and/or non-Black women. Disheartened by their continued dismissal, the twins vent to their friends about the discrimination they face as Black women in the college dating scene. First, the sisters and their friend Luca (Luka Sabbat) take Grown-ish’s resident pro-Black activist, Aaron (Trevor Jackson), to task for routinely dating lighter-skinned and/or mixed-race Black women.

When Aaron claims that he’s only interested in dating a “queen,” Luca quips, “You love queens when they’re Egyptian, not Nubian.” Adding a layer to his character’s often performative “wokeness,” Aaron’s dating preferences represent how straight Black men can perpetrate anti-Blackness and colorism by reinforcing the eurocentric standards of beauty that Black women are socialized into. After being called out, Aaron goes out of his way to court a darker-skinned girl. 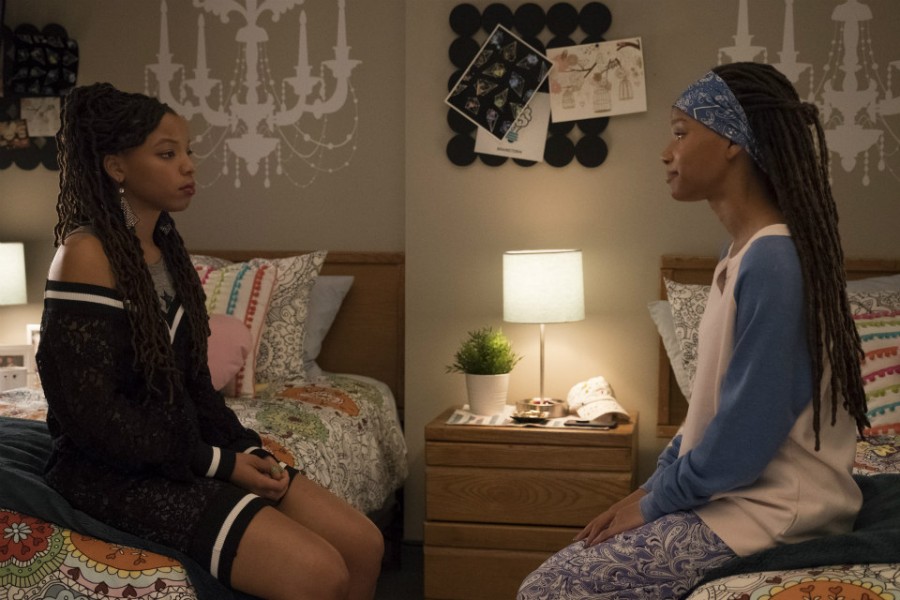 He awkwardly emphasizes the woman’s Cameroonian background to prove that he’s interested in women from the “motherland.” Too bad she’s from Denver. That’s where the episode falls flat: Grown-ish doesn’t even allow the episode’s one dark-skinned woman to challenge Aaron in a substantive way. But that’s par for the course for a show without any dark-skinned Black actresses—a point of contention that’s been called out over and over again.

In contrast, Vivek (Jordan Buhat), an Indian American Drake enthusiast who desires a “little bit of danger,” says that Black women are at the top of his “list.” Trafficking in hypersexual narratives of Black women’s strength and violent emotionality, he exemplifies the flip side of sexual racism, in which racist clichés inform interracial interest. Through Aaron and Vivek, Grown-ish challenges the popular conception of Generation Z as unprejudiced and sexually free by showcasing how this open-mindedness is rarely extended to Black women.

A 2014 OKCupid study referenced in “It’s Hard Out Here for A Pimp” found that white and Asian women are highest-rated on online dating sites while 82 percent of non-Black men showed some bias against Black women. Black men were found to “show little racial preference either way.” These findings reflect various studies about online dating and marriage that have shaped discourse about Black women’s romantic lives. According to Pew Research data from 2017, Black men are two times as likely as Black women to marry someone of a different race or ethnicity whereas only 12 percent of Black female newlyweds married interracially. Black women who want to date and marry non-Black partners often navigate complex interracial and intraracial social dynamics that are reinforced by studies that sensationalize their intimate lives.

The study that best encapsulates this phenomenon is perhaps Senator Daniel Patrick Moynihan’s infamous 1965 report “The Negro Family: A Case for National Action.” The Moynihan report effectively cemented the “single Black woman” as a disgraced figure in our political and social imagination. In Moynihan’s own words, Black communities were “dominated” by women and unable to maintain “any stable relationship to male authority.” Recent statistics on online dating have revived this trope for new generations, failing to reveal anything new about the racist underpinnings of America’s beauty standards or dating culture. On Grown-ish, Black men are ultimately able to escape accountability.

Despite the episode’s shortcomings, Grown-ish managed to explore how Black women navigate anti-Black sexual politics without becoming diagnostic or pathologizing singleness. To protect the young Black women of Generation Z from the demoralizing weight of the “single Black woman” caricature, we must offer models of Black womanhood that honor our humanity by showing that we are worthy of love and affection and undefined by any one relationship or lack thereof.