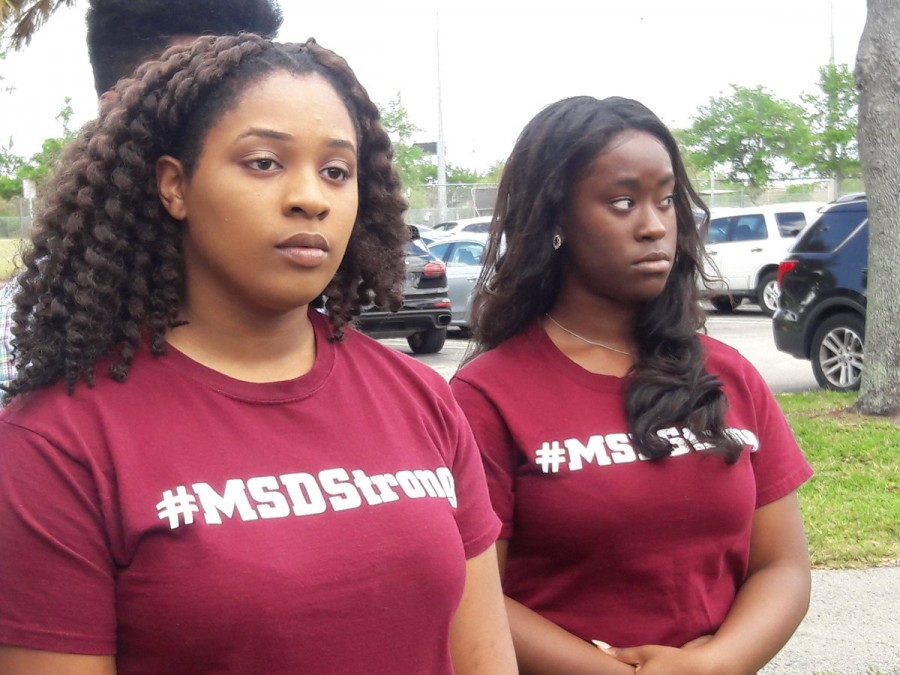 Building community across racial lines is a complicated process. This is especially true after a tragedy. As we continue to debate how guns will be handled in the United States, the tensions of race, class, and ideological commitments remain enmeshed with questions of privilege and power.

On March 28, Black students from Marjory Stoneman Douglas High School gathered at North Community Park near Parkland, Florida to bring media attention to their concerns that they’re being overlooked in the growing conversation on gun violence. The press conference was organized in concert with the Black Lives Matter Alliance Broward and about a half dozen Black students were present. But most people didn’t hear about it.

Black students make up roughly 11 percent of the school’s 3000 student population, but these students see stark differences in the level of national and local support they’ve received in comparison to their white and Latinx counterparts. On Valentine’s Day, a gunman killed 17 people at Stoneman Douglas and injured 14 others in the process.

Since then, bipartisan support for stricter gun laws has grown. The laws are mostly geared toward liberal Democratic agendas like limits on assault-style rifles and magazines, background checks, limitations on ownership for those with a history of mental illness, and tighter restrictions on when and where guns can be purchased. These mostly political solutions overlook the frequent use of legally purchased, licensed guns in mass shootings and would also lead to more surveillance and the criminalization of those with mental illnesses. It’s no surprise that Democratic lawmakers in Congress saw the non-Black Parkland survivors and families as prime advocates for such a colorblind political agenda. 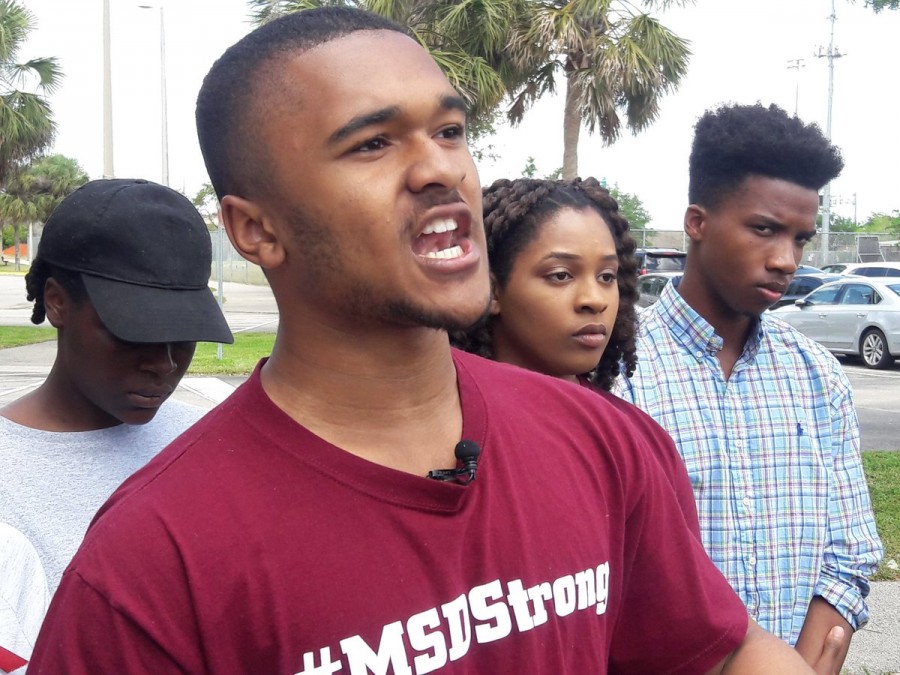 Young, mostly white people from Parkland have increasingly become the faces of the movement against gun violence in the United States. In fact, David Hogg, Jaclyn Corin, Alex Wind, Cameron Kasky, and Emma Gonzalez, all survivors of the Parkland shooting, were featured on the cover of Time’s April issue. Most of these young, non-Black activists are verified on Twitter. They have tens of thousands (or, in Gonzalez’s case, more than 1 million) followers. Several have been invited on Ellen DeGeneres’s nationally syndicated talk show and are supported by pop stars like Demi Lovato. But Black students from Parkland haven’t had those experiences—and they’re refusing to be quiet about the disparate treatment.

“I am here today with my classmates because we have been sorely underrepresented and in some cases misrepresented,” said Stoneman Douglas junior Tyah-Amoy Roberts at the press conference, according to Broadly. Comparing her experiences to those of the teens most prominently associated with the #NeverAgain movement, Roberts said that she and other Black survivors are “rarely seen in mainstream media the way that our white peers are.”

Her question is a reminder that the mainstream media doesn’t just report the news; it also chooses heroes and villains, winners and losers, those whose stories are worth telling versus those whose aren’t. The tragedy at Stoneman Douglas High School didn’t affect only the predominantly white students the media has so deeply embraced. It has had the dual impact of traumatizing Black students—who are already more likely to experience gun violence—and silencing their experiences after the massacre.

David Hogg criticized the media for “not giving Black students a voice.” In response, Roberts posted the following statement via threaded tweets:

“Don’t get me wrong @davidhogg111, I appreciate your gesture of calling out the media for the lack of Black faces in the aftermath of the incident at our school, but I don’t recall (nor do any of our Black peers at Douglas) getting any invites from you to join the #NeverAgain “figureheads” at any of your meetings or interviews. This is not the first time you have called out racial disparity, but you have yet to take tangible action to help change it with your classmates. So here’s my challenge to you: allow me to be the first Volunteer to take a seat at the table with you guys to advocate for a cause that has affected everyone at MSD regardless of race. After all, as has been preciously [sic] stated in the media, “these Parkland kids are eloquent and outspoken,” and just like you, I fall into that category.”

So, while the media has been doing what it usually does, non-Black Parkland survivors are also grappling with what representation, allyship, and “checking privilege” really looks like right now. For Black Stoneman Douglas students, the learning process has been disappointing. Kai Koerber is a 17-year-old Black student who also survived the shooting at Stoneman Douglas. He isn’t verified on Twitter and hasn’t been featured on any magazine covers. But after returning to school, he felt that the new policies—including mandating clear, plastic backpacks—would criminalize Black and Brown students. “It’s bad enough we have to return with clear backpacks,” he said, according to the Miami Herald. “Should we also return with our hands up?”

For nonwhite students at Stoneman Douglas, a single gunman isn’t the only viable threat to their safety. After years of media coverage of the deaths of young people like Trayvon Martin, Rekia Boyd, and Tamir Rice, they likely know that gun violence comes in many forms, particularly in the form of policing. And this is not a threat that young Black people just started activating against. They’ve been at it for years.

https://t.co/nIbagkILmD Don’t get me wrong @davidhogg111, I appreciate your gesture of calling out the media for the lack of black faces in the aftermath of the incident at our school, but I don’t recall (nor do any of our black peers at Douglas) getting any invites from you to

join the #NeverAgain “figureheads” at any of your meetings or interviews. This is not the first time you have called out racial disparity, but you have yet to take tangible action to help change it with your classmates. So here’s my challenge to you: allow me to be the first

Volunteer to take a seat at the table with you guys to advocate for a cause that has affected everyone at MSD regardless of race. After all, as has been preciously stated in the media, “these parkland kids are eloquent and outspoken,” and just like you, I fall into that category.

The recent March For Our Lives rally in Washington, D.C. and in cities around the country drew further attention to the stark differences in support for the non-Black Parkland students and larger efforts to address gun violence against Black communities, like the Movement for Black Lives. Writing at The Root, Black Lives Matter Toronto cofounder Janaya Khan asserted, “There isn’t one Black person I know who isn’t supportive of the Parkland youths, and who isn’t also hurting from the constant reminder that we are undeserving of the same love and support.”

But this isn’t about popularity. It’s not about celebrity or status. It’s about access. And one thing we know about privilege is that it grants certain forms of access that are limited for those without it.

When we talk about gun violence in America without talking about the sequelae, meaning the ripple-like enduring impacts that violence inflicts on those who survive it, we do not do them justice. Young Black people have been working tirelessly to dismantle systems of criminalization and policing that lead, daily, to unnecessary and undue force against them. They often do this work without being invited on stages with Disney stars or primetime television hosts. They do this work when it is risky, life-threatening, and devoid of recognition or praise.

The Movement for Black Lives created a policy platform which highlights concrete ways to demilitarize police and eliminate systems of surveillance that criminalize Black communities. Their focus on targeting local officials and leveraging existing legal frameworks coincides with the forms of violence Black communities so often experience.

The Movement has done the labor, research, and vetting of organizations—like the Million Hoodies Movement for Justice and STOP Chicago: Southside Together Organizing for Power—to address the specific ways that gun violence affects those most marginalized in this country. But the media’s failure to focus on these efforts (and the prominence of more mainstream reforms supported by leaders of the March for Our Lives) doesn’t mean these young people don’t “have a voice.”  It’s just that there have always been systems in place churning away, meant to make those voices much harder to hear.

Yes, we should support the Parkland survivors. Yes, they should be heard. But in this moment, we should tune our ears to hear the survivors who were already there. If this is our first time listening, let it be with deliberation and respect for those whose voices seem to us to only be a whisper.

When Our Heroes Fail Us