Haim’s “Women in Music Pt. III” Gets a Little Darker 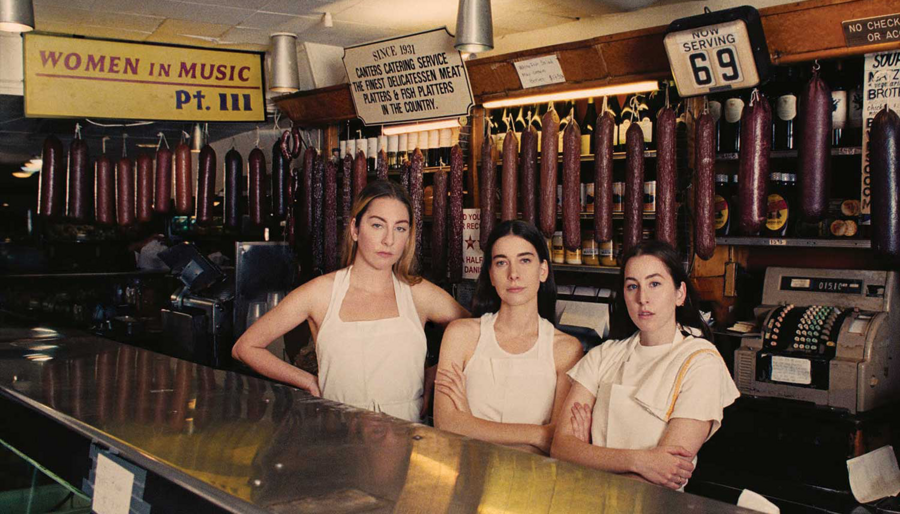 From the start of the album, we know that Women in Music Pt. III is a different body of work from Haim. Made up of sisters Danielle, Este, and Alana Haim, the trio has long been incredibly talented and skilled with a distinct, airy ’70s aesthetic. But there’s been a shift in that recognizable sound. The very first track, “Los Angeles,” immediately introduces us to a heavier, moodier Haim: “Los Angeles/ Give me a miracle, I just want out from this/ I’ve done my share of helping with your defense/ But now I can’t dismiss/ It’s killing me.” Rather than the easy listening we’re accustomed to —music that invokes visions of driving down scenic roads with the windows down—we become locked in and centered into an intimate world that asks for something more than this. It’s a jazzy kickoff, and that sound alone suggest that this album is different from what listeners might expect. They aren’t saying goodbye to their sunshine-y, Fleetwood Mac aesthetic, but are instead swapping that lightness for something a little darker; this album reveals that the group is in need of something deeper: healing.

Los Angeles is thought to be a place of warmth and dreams, but “Los Angeles” makes clear that the iconic haze can be tiring and complicated. This sense of disillusionment continues through the third track, “I Know Alone.” This song offers, “I don’t wanna give, I don’t wanna give too much/ I don’t wanna feel, I don’t wanna feel at all” against a parenthetical phrase, repeated in different voices, that adds notes of depression to the song: “(Now Sunday comes and they expect her to shine).” It’s an honest commentary on mental health and one that rings true considering the Haim sisters have been increasingly forthcoming about their own mental states. In a November 2019 interview with i-D, Danielle explained the birth of “Now I’m In It,” sharing, “People listen to it and think it’s about a relationship and I get that. But we actually wrote it coming out of that tour depression.”

“It’s a story about being super in your head and being in a down place and waking up and not wanting to get out of bed and having crazy thoughts,” Danielle continued. “It probably has to do the most with me and tour and the last couple of years that I’ve had. I crashed. It was hard. I think ‘Now I’m In It’ speaks to just accepting that you’re in a dark place. I think it’s the moment that you accept it when you can start to get out of it in a way.” Giving way to crashing is the backbone of Women in Music Pt. III, as each song speaks to a need for tenderness. It’s a pursuit that pushes Haim beyond their usual boundaries and encourages experimentation. How else do we examine ourselves and our truest needs if not by shifting our perspectives? For Haim, that means actually switching up their sound.

While the album maintains its pop and rock roots, it doesn’t shy away from genres that are newer to Haim, like the funk of “Gasoline” or the R&B of “3AM.” “Gasoline” is built on slow crooning and heady guitar: “You took me back/ But you shouldn’t have.” It’s a song about longing that’s reminiscent of “Falling,” the popular 2013 song from their debut studio album, Days Are Gone. While “Falling” aligns wanting with hope—“Into the fire feeling higher than the truth/ (I’m falling)/ I can feel the heat but I’m not burning”—seven years later, ”Gasoline” wants, but can’t have—”Gasoline, pretty please/ I want to get off/ But you’re such a tease.” This want spirals into “3AM,” a fun piece that recognizes the frustration of hooking up; again, the thread of wanting continues. After all, nothing wholesome takes place at 3AM: “You and I don’t have to meet/ But it’s fun to think we could/ Mmm, on the screen and in my jeans/ Just make me feel good, oh.” Seeking out what feels good makes sense in the context of the album that looks directly at depression, denial, and, this new-to-us version of Haim that’s feeling the weight of the world.

As a whole, it’s an album fitting for the summer ahead. Haim is growing beyond their central folk-pop style in favor of something fresher, something that empowers them to examine heavier issues, including depression,  while also poking fun at hookup culture and the brief, happy distraction it offers. In the aforementioned “I Know Alone,” Danielle sings, “Sleeping through the day and I dream the same,” a song eerily relevant to our current times where days seemingly blend into one another. On the final track of the album, “FUBT” (“fucked up but it’s true”), we get “Another day, another hour, no apology/ How can I sleep when I can’t dream at night?” It’s a never-ending darkness, and the listener is on this ride with the band, who wants to heal but knows it’s hard when you can’t imagine anything better.

Together, however, it’s possible to begin imagining. Bonus tracks “Now I’m In It,” “Hallelujah,” and “Summer Girl” remind us that we can survive the muck. “I met two angels but they were in disguise/ Took one look to realize/ Tell ‘em anything and they will sympathize,” the sisters offer with hope in “Hallelujah.” The lyrics to this bonus track were inspired by the sudden loss of Alana’s best friend, and the emotional toll that took: “These arms hold me tight/ Old fears, helped to ease them in my mind/ New tears say that they will dry in time.” And angels are what we get again in the final bonus track, “Summer Girl”: “You walk beside me, not behind me/ Feel my unconditional love/ And I can see the angels coming down.” In the space of 16 songs and 52 minutes, Haim is healing, and they’re offering a path of healing to their listeners—one messy hookup and hazy drive at a time.

Read this Next: Loamlands Makes Folk Songs for Punk Hearts