Not Your Final GirlIn “Halloween,” Laurie Strode Is a Survivor

For four decades, audiences have been obsessed with serial killer Michael Myers. Since 1978, when Halloween premiered, the silent, white-masked figure of evil has (along with his creator, John Carpenter) been credited with spawning the era of slasher films, and has been the figure at the center of 11 films, a comic-book series, and countless nightmares. As for the film’s iconic Final Girl, Laurie Strode (Jamie Lee Curtis), she’s back and as haunted as ever in David Gordon Green’s new sequel.

In the newest follow-up to the original Halloween, it’s 40 years later and Laurie is still tormented by the night Michael Myers fixated on her, stalking and killing all her friends.

Estranged from her family, Laurie lives alone, her home a bunker fortified against the boogeyman she’s convinced will be back one day; even if nobody believes her, she is determined to be ready. Like most notorious serial killers, Michael has attained fans and celebrity status during his incarceration; despite the fact that he’s never said a word—and perhaps because he’s never said a word—the enigma around him has grown to mythical proportions. Michael’s silence has convinced outsiders to believe they know how to “solve” him; his psychiatrist, Dr. Sartain (Haluk Bilginer), is confident that if he can get Michael to talk, he will finally understand the true nature of evil. A pair of investigative podcasters, Dana Haines (Rhian Rees) and Aaron Korey (Jefferson Hall), feel the same way, and are hopeful that if Michael and Laurie face each other the confrontation will heal them both.

Laurie understandably disagrees. “Did you know I prayed every night for him to escape?” she asks. “So I can kill him.”

Laurie Strode was Jamie Lee Curtis’s breakout role as an actor, and this sequel offers up one of the most vulnerable, fierce, and moving performances of her career. In an interview with Black Girl Nerds ahead of the film’s release, Curtis discussed crafting the newest iteration of this damaged character, explaining of the 1978 Laurie, “She was probably going to go to Smith or Brown. She was very much on her way. She was a dreamer, she was a romantic… And then two days later she went back to school, and she was a freak. She was this survivor, but nobody would talk to her. Because what do you say? Nobody knew what to say back then.”

Today’s openness to discussing grief and trauma is a huge generational and sociocultural shift; Curtis explains in the same interview that today it’s far easier now than it was in the ’70s to seek out help after a traumatic incident. We can get names of therapists from friends or friends of friends, find written resources online, join support groups either remotely or in person. But Laurie’s trauma occurred in a time without those outlets, and she took her survival to a dark place by necessity.

Forty years on, what’s most heartbreaking about Laurie is how real she is. Without the kind of support that is now normalized, Laurie’s wounds festered and rotted. Her coping mechanisms—alcoholism, isolation, agoraphobia, combat training—are mostly unhealthy, keeping her just as alienated as she was the day she went back to school and realized she would never be the same again. 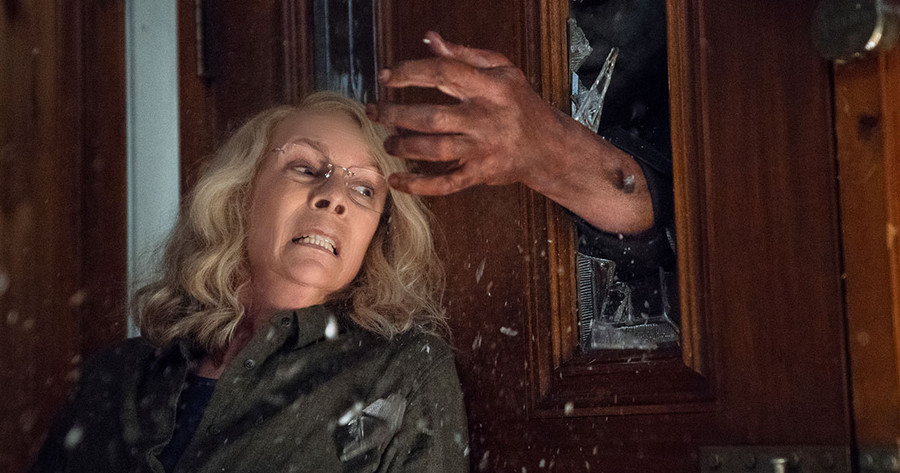 Laurie is obsessed with Michael, but she is also obsessed with an elusive notion of safety that she cultivates through securing her home and maintaining a supply of weapons for self-defense. She’s never been able to offer love to her now-adult daughter, Karen (Judy Greer), only security and protection. To someone with untreated PTSD, that protection is love; to Karen, however, it’s been more akin to abuse. Laurie’s teenage granddaughter, Allyson (Andi Matichak), wants to connect with her, but even she’s had enough: “Say goodbye to Michael,” Allyson warns her grandmother. “Get over it.”

Halloween contrasts the expectation that survivors have a set amount of time to recover and “get over” their trauma with the allure of the murderer as antihero, and the attention devoted by the film’s characters to understanding Michael Myers. It’s a reflection of a dynamic that regularly plays out in our culture at large, one that focuses on perpetrators rather than on those they harmed. As just one example: Brett Kavanaugh’s confirmation hearings and aftermath were crammed full of concern about how his life would be ruined by the allegations against him; the damage done to Dr. Christine Blasey Ford—who added two front doors to her home to feel safe—was largely brushed off.

Despite others’ fascination with him, Michael Myers is not the embodiment of evil. Like so many serial killers before and since, he’s a very real representation of white male brutality, a personification of the darkest corners of white supremacy and the patriarchal aggression it visits upon women in particular. Even Michael’s not-extreme acts of violence—the stalking, peeping, physical intimidation, and other targeted acts—mirror the real terror that women face every day, both in real life and on social media. When Michael puts his hand over Laurie’s mouth to silence her, I had a vivid, sickening flashback to Dr. Ford’s memory of being assaulted by Kavanaugh. Michael Myers is a monster, but he’s no boogeyman. He’s “just” a man.

Decades of fear have taught Laurie Strode how to help herself feel safer; both she and her home are shored up, on the defensive, ready for the inevitable. As a survivor myself, I do the same. Going to movies alone, for instance, used to be one of my great joys. But my own accumulated trauma, combined with movie-theater mass shootings, have taken that sanctuary space from me. Watching Laurie confront her lifetime nightmare forced me to confront some of my own, and not from the preferred safety of my home. My Halloween incident happened 18 years ago, on October 28, and under my skin I still feel the terror of the night I survived the gun crime that took my friend’s life. It was the day my life fragmented, like Laurie’s did, and I’ve never related to her as much as I did in Halloween’s new incarnation.

In 1978, Laurie was a young girl who screamed constantly while under attack, as if her voice was the only weapon she had against the monster. In 2018, the former “scream queen” is armed with resolve and pain, and her only scream in the film comes from a place of anger and grief—not fear. As women in an openly hostile world, many of us learn early on that our shouts will go unheeded. Some of us swallow our voices until they become so small we don’t even recognize them as ours. Some of us harness our shouts for healing and for justice, as Laurie ultimately does. Halloween suggests that we can confront the monsters of our pasts, but not alone—Laurie’s trauma pushed her family away, but when it comes back together they finally defeat its source. By the movie’s end, when Laurie, Karen, and Allyson ride away from Laurie’s bunker, they are bloody and newly traumatized. But seeing their hands still clasped together for dear life, I sensed hope and eventual healing in their collective future. I wish the same for myself one day. The scream queen has become the queen of survivors. And Halloween is her love letter to all of us, wrapped in a most excellent slasher movie.

Read this Next: Girl, You'll Be a Cannibal Soon