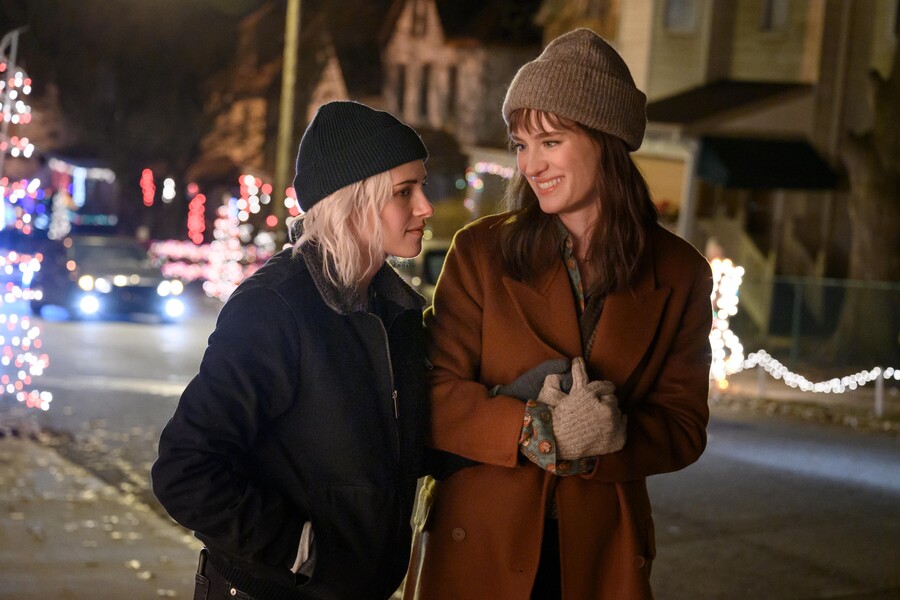 I imagine that being one of the first queer holiday films comes with a ton of pressure, but this year, Hallmark still announced its first gay holiday movie, The Christmas House, making strides and likely surprising surprising their audience, which is typically given holiday movies about straight couples. Meanwhile, Netflix’s A New York Christmas Wedding diversifies the all-white, gay Christmas tale, but it’s low budget. I’ve been holding my breath for Hulu’s Happiest Season because of all it promised to be: queer filmmakers and writers, including legend Clea DuVall of But I’m A Cheerleader (1999) fame; a star-studded cast made essentially from my dreams (have we not been waiting for this since Kristen Stewart’s Totinos skit on Saturday Night Live?); and the marketing budget and streaming availability to be an accessible gay film. I was excited, and so were many other queer people.

As soon as I started watching, I wanted Happiest Season to slow down. I desperately wanted to stay with Abby (Stewart) and Harper (Mackenzie Davis) as they wandered through the snow in an overly decorated neighborhood, on a Christmas tour led by a Santa-hat-wearing Michelle Buteau. Abby calls Harper “baby”! Buteau’s character offers up Christmas tree-related deaths with a straight face! There are beanies and cuddles and snowmen! Stewart slips down a snowy roof in a classic holiday shenanigan! I loved everything about it. But the film has a premise it has to carry out, and even though I get it—I swear I do—I wanted nothing more than to just continue hanging out in the queer bubble they created. I wanted to wait as long as possible to get to the meat of the film, which is a secret-laden coming out story.

Because of course it is.

Happiest Season has big shoes to fill though there is really no other movie like it. It has to be the queer holiday movie we’ve all been waiting for while also fulfilling the basic movie requirements that seem to exist per the powers that be: If they’re going to be gay, keep it white, make them rich, and throw down some coming out trauma combined with secrecy and lies. Will we get the queer holiday movie of my dreams that has absolutely nothing, or even just a little bit less, to do with coming out? I’m hopeful. But Happiest Season isn’t that. The film has two major pressure points: The first is that Harper is closeted and her parents have no idea that she’s dating Abby; and the second, of course, is that it’s Christmas.

Christmas is everything for Harper and her fancy family. The tension is amped up because Harper’s dad, Ted (Victor Garber), is vying for a political seat, and as such, image is everything. (I hated this move because it felt like the film had to introduce his political campaign in order to justify Harper’s coming-out stress, as if simply being terrified of your family isn’t enough.) Tipper (Mary Steenburgen), Harper’s mother, stalks the family with her iPad, snapping photo after photo. Tipper is the matriarch who keeps everyone under control. In one of my favorite moments, Abby is still getting dressed, her head lost in her sweatshirt, when Tipper walks into her room unannounced. Abby offers, “You’re such a great host,” a statement immediately proven false by the fact that she was almost caught in a state of undress by the pushy Tipper. These subtle moments of comedy feel so very true and real, especially if you’ve ever been forced to play the “roommate who just happens to always be at Christmas dinner” for your own partner.

Harper’s sister Sloane (Alison Brie) and her husband Eric (Burl Moseley) disappointed their parents by leaving their jobs as lawyers to sell subscription kits, but they aren’t totally hated because they can at least provide the family with a small pop of youth (and color) in the form of their twins. (Sloane’s family is the only thing providing nonwhite people to this extremely, unsurprisingly white cast.) Then we have Jane (Mary Holland, also the film’s writer), the final of the three sisters, who is sidelined even though she’s the most interesting sister of all—something the film is very much aware of even if the family is not. Issues between queer couples aren’t always about coming out. But in Happiest Season, the coming-out arc masks Abby and Harper’s actual problem: They’re on entirely different pages and can’t effectively communicate.

It’s not that Harper didn’t come out to her parents; it’s that she lied about it. It’s not that Abby is pushing Harper toward marriage; it’s that she has no sense of who Harper really is. Harper isn’t just hiding her queerness; she’s hiding everything about herself in order to cultivate a personality she believes will make people like her more. Abby watches in surprised horror when Harper squeals through a mouthful of alcohol as her high school best friends approach, also squealing. Several exhausting dinners find Abby sitting at the same table as Harper’s ex boyfriend, Connor (Jake McDorman), while Harper’s family encourages them to get back together. Harper could say she’s not single or at least set some kind of boundary with her parents, but there he is, again and again.

Harper’s problem isn’t that she’s not “being her most authentic self,” it’s that she has zero boundaries and lies to get whatever she wants—a much larger problem than just being worried about coming out to your parents. Happiest Season could theoretically elect to sit with these complicated moments, but because it’s a holiday film at heart, it doesn’t have time for that. Instead, we get more hijinks—ice skating fights and nonsensical arguments. Harper doesn’t apologize for being a huge asshole to Abby about wanting to hang out with her friends, and Abby is hardly seen or honored by Harper’s parents. The filmmakers also make the bizarre decision to present the film’s two kids—Harper’s twin niece and nephew—as thieving hooligans who steal a necklace from a store and slip it into Abby’s bag. Is it funny? Maybe. But it also reinforces some strange stereotypes about Black kids being tiny, antisocial thieves, and it takes away time that would have been much better spent explaining why the hell Abby likes Harper to begin with.

By far the biggest success of Happiest Season is how full of queer people it is. Though straight audiences so often don’t celebrate these inclusions—This film is too gay! This is unrealistic!—queer people do actually find one another even in the most unlikely of circumstances. For some of us, we end up in friend groups where, one by one, as we age, we slowly come out to ourselves and each other. Long gone are the days when you can get away with having one gay person onscreen and calling it realistic. It’s a fact that Happiest Season is well aware of, most likely because of who is behind the camera. And Abby and John (Daniel Levy of Schitt’s Creek) are deserving of an entire spinoff series; only Levy could pull off a character who goes on a rant about the prison that is marriage and “sticking it to the patriarchy” without weighing down the film. As John, he’s our wine toting, (subpar) pet-sitting, voice of reason. When Abby calls him and says she’s pretending to be straight for Harper, he quips, “Have they ever met a lesbian?” In the film’s more serious moments, he offers sobering realities about what it means to be queer, even today, and why coming out carries such weight.

We haven’t reached the point where there are enough of these films for me to feel like I can really pass any sort of judgment; how do you judge the first, second, or third of something?

I would also happily watch Abby and Riley (Aubrey Plaza), Harper’s ex, in a four-hour movie about bi women, lesbians, and exes. As Happiest Season plays on, Riley becomes Abby’s unexpectedly expected ally, the one person who can really understand what she’s going through. Given that both Plaza and Stewart are equally strange and skilled at dry humor, I wanted to watch their scenes on repeat. That, and the red glow the drag show cast over their conversation, had me convinced they were the real stars of this film: “The thing that I can relate to is being in love with someone that is too afraid to show the world who they are,” advises Riley. Abby nods, sighs, looks down into her drink, and I cried, obviously. Happiest Season teased a number of what-ifs. Harper and Abby were sweet, but there was more heat between Abby and Riley just sitting next to each other in that booth than there was when Abby literally straddled Harper. My girlfriend and I gripped each other’s arms, hoping Abby would ride into the distance with Riley and really flip the happy ending on its head. Besides, what’s gayer than finding love with your girlfriend’s ex?

I want a queer movie that has the space and time to reckon with the ways that queer partners fail each other. Dating and loving and marrying another woman doesn’t make things easier; there is no magical connection. And while we may have more access to what it means to be queer and a woman, we are also so much more. And that “much more” is what, so often, causes us to royally fuck things up, just as we see Harper do time and time again until her time—and the length of the film—has nearly run out. I will rewatch Happiest Season many times over, much like I watched The L Word 15 times in a row when I realized I was gay, and much like I’ve spent hours clinging to YouTube compilations of the smallest of gay breadcrumbs in otherwise straight shows. We haven’t reached the point where there are enough of these films for me to feel like I can really pass any sort of judgment; how do you judge the first, second, or third of something? There is room for growth. There is room for more. There is room for us to, one day, really see ourselves onscreen. For me, Happiest Season isn’t it. But it’s close enough. And far be it from me to deny that small bit of happiness to myself, or to other queer people who have been aching to see themselves on the big screen, kissing in the snow—even if it isn’t perfect and even if they’re still afraid.