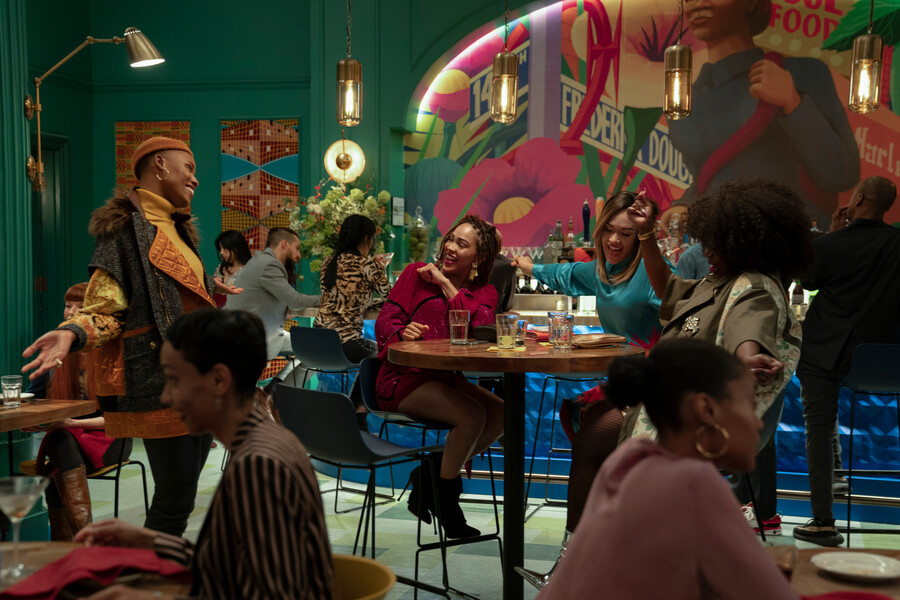 Simply put, Harlem—a new Amazon Prime show about four Black girlfriends living in the predominantly Black and rapidly gentrifying part of New York—is mediocre: bad acting, bad writing, bad plot, and bad politics. It relies heavily on recycled rom-com storylines, making originality scarce. The main character, Camille (Meagan Good), is just a more intellectual version of Carrie Bradshaw, and her three best friends are obvious copies of Charlotte, Samantha, and Miranda. The end result is a show that feels like the Black version of Sex and the City (except at least SATC felt more rooted in the actual city of New York). The extent of Harlem’s connection to its neighborhood seems to be whiny laments about how gentrification is impacting dating prospects, mean-spirited barbs aimed at lower-class Black people, and the presence of Columbia University.
But riffing off Sex and the City isn’t the only instance where Harlem lacks originality. While its strength lies in its ability to explore and represent Black identity, the script sinks back into poaching, making all attempts to address any serious social issues seem pulled straight from Twitter debates. The blatantly problematic elements of the show, like fatphobia, classism, and colorism, seem to clearly reference moments of backlash from other shows or prominent individuals’ behavior in real life—like colorist casting or J.K. Rowling’s attention-seeking transphobia. But most curiously, Harlem seems to be intentionally designed to manufacture outrage. Because in order for the show’s writers to be familiar enough with Twitter discourse to create these plotlines, they would also have to know which minefields to avoid. But Harlem awkwardly slams its foot on these minefields, like a petulant #replyguy.
So when offensive moments came up—if you’ll allow me to channel my inner Carrie Bradshaw for a moment—I couldn’t help but wonder, “Did they write it like this on purpose, just to make us mad, so they could get streams?”
Harlem might be a bad show, but it’s got a good comfort-watch element to it, which is the part I enjoyed. As a Black woman, I rarely get escapist rom-coms featuring people that look like me. While I rolled my eyes at most of the series, towards the end I found myself shouting at the TV in excitement over the guilty pleasure of Camille’s toxic romance. Had the show left it at that, it would have been fine. Not good, but fine.
However, I felt almost baited into discourse with ham-fisted scenes that seemed designed to inspire anger. One notable scene is when an older, white woman professor gets fired and “cancelled” for saying at a rally that only “biological women” can get pregnant. The show takes a sympathetic view to the professor’s TERF-y predicament, framing her as a frazzled and well-intentioned woman besieged by hysterical social-justice warriors online. It’s pretty shocking that the show would go there at a time when prominent figures continue making transphobic comments at the expense of trans people, creating an uphill battle for the trans community.
In another scene, two characters literally roam the city looking for fat men to sleep with so their “extra meat” can keep them warm in the winter. “I love it when they got a little grease in they beard,” Angie (Shoniqua Shandai) says, at the exact moment that I started to question if these were all purposeful blunders. The combination of the show’s offensive moments felt more like desperate, off-putting ploys for attention than plot points.
Even the casting of Angie felt designed to make people outraged. Once again, the wealthiest and most feminine character was a light-skinned woman, Quinn (Grace Byers). And the most aggressive, hypersexual character was a dark-skinned fat Black woman (Angie), who constantly mooched off her light-skinned best friend (Quinn), living and eating in her apartment for free and even ordering Uber Black cars on her credit card without consent. It would have been simple to avoid this trap. Still, every show has casting issues like this. Notably, on Insecure, Kelly (Natasha Rothwell) is relegated to the fat best friend trope, often given little character development despite her being the show’s great strength. But Harlem is a confused free-for-all of problematic things, baiting potential viewers into hate-watching it. And it sort of worked; I first became aware of Harlem because people on my timeline were debating a misogynistic barber shop scene—which, interestingly, wasn’t even offensive, but actually took a stand against misogyny. However, I barely heard anything about the other problems with the show, such as a downplayed teacher-student sexual romance between Camille and an undergrad.

On one hand, the problems with Harlem aren’t new. These types of sitcoms about female friendship have always played on the zeitgeist and politics to both create plots and spark discussion amongst viewers. Harlem’s predecessor and clear muse, Sex and the City, regularly discussed class, sexuality, and religion—often badly and offensively, just as Harlem does. But whereas the writing in comedy shows of old feels careless, in Harlem, it feels manipulative, designed to draw people in for rage streams and curiosity generated on Twitter.
“Let people enjoy things!” has become a refrain for many, some of whom are simply running away from meaningful and necessary critique. Others are merely exhausted from the seemingly near-constant nitpicking over TV and movies that exists among a certain segment of the Extremely Online population. But it looks as though shows are increasingly leaning into this provocation, perhaps purposefully antagonizing the Extremely Online population, by taking the issues of identity about which many of us care deeply and butchering them.
And even when these social issues were addressed adequately, it felt directed towards white people, not Black women. The lengthy diatribes about gentrification and microaggressions at work seem like Instagram slides educating those who’ve never experienced it—coming off as preachy and disingenuous. In one early scene (that requires a total suspension of belief regarding how people behave in both meetings and life in general), Tye (Jerrie Johnson) lectures and then commands an ignorant white man who undervalued her company to address her as “Your Highness.” A few scenes later, she randomly takes a picture of her pussy at the table and sends it to a fling. I can only guess, but I think as viewers we’re supposed to see a bold woman taking control of her career and sexuality? But I just kept waiting to see it revealed as a dream sequence. The show is filled with upper middle-class Black millennial girlboss moments like this. It’s not escapism or fantasy or cathartic; it’s just cringe and baffling.

This isn’t a plea for the freedom of mediocrity…But it is a plea for escapism, which feels like something we’re lacking in many ways.

Wondering why the fumbles in Harlem happen in the first place leads me to some pretty bleak ideas. Is it because we train ourselves to think that’s what gets Black art noticed? Either they do the work of representing us exceptionally well, or they do it exceptionally wrong. The way to get eyes on our work is to either be perfect, cater to white viewers, or fuck up tremendously. This isn’t a plea for the freedom of mediocrity (because I do want the shows I watch to be entertaining and well-written). But it is a plea for escapism, which feels like something we’re lacking in many ways: just a simple romance and story about friends that doesn’t try to enrage us at every turn so we’ll tweet about it.
But then again, I couldn’t help but wonder if I was being too harsh. It’s just a show, after all, and white rom-coms are rarely faced with this much scrutiny. In fact, when they’re offensive or badly written, they tend to become cult classics and problematic favorites. I thought about what shows I can watch for escapism with Black leads, and there are few options. Maybe part of the reason why is the pressure to be perfect. Are we, perhaps, critiquing our own people out of the ability to give us simple joy?
Harlem is not a good show. But is it good for what it is? I don’t know if I’ll ever really know the answer to that because my eye has been trained to notice every problematic detail, my mind has been trained to care, and my finances have been trained to nudge me to write about it for money.
Still, so much about this show is wrong or unfair. The fact that the only fat dark-skinned character is hypersexual, lacks any meaningful development, and serves up laughs is wrong. Using transphobia as a weird storyline is unnecessary. Throwing in a plotline about Camille sleeping with a student is way off, and triggering for anyone who’s ever had a person in power take advantage of them. “Let people enjoy things” is a useful refrain until it isn’t because the people who aren’t enjoying it are usually the most vulnerable. They’re also the people whose enjoyment is usually taken into consideration last.

Read this Next: We're All Grist for the Gossip Mill Now 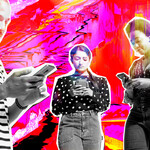 by Jenna Mahale
Our human instinct to discuss—and judge—others is increasingly warped by social platforms.