Will Feminine Boys Ever Truly Be in Style? 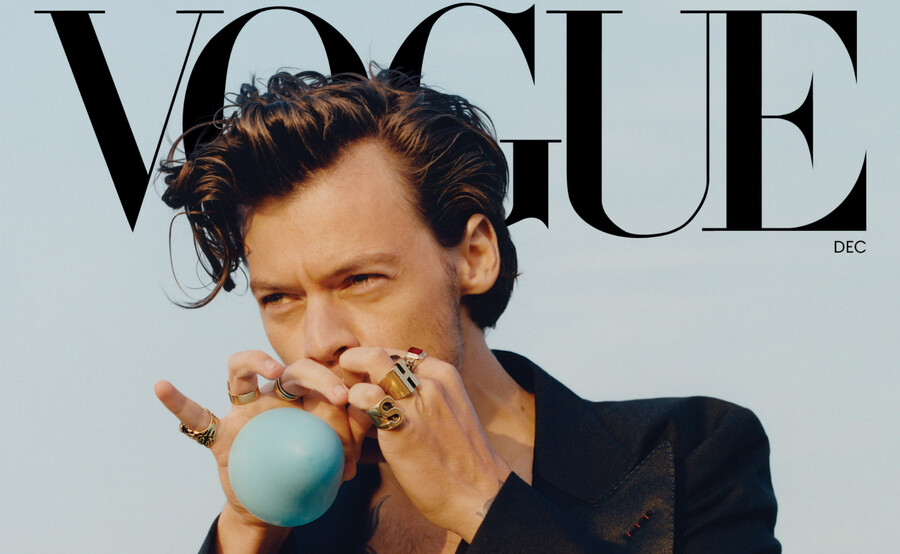 Few things can scorch the internet as much as a man in a dress. After 39 Emmy nominations and 19 wins, one would think that RuPaul’s Drag Race would’ve normalized an understanding that sometimes men dabble in feminine frocks. But it wasn’t until November 2020 that Harry Styles made history as the first-ever solo man to grace the cover of American Vogue. The cover—photographed by Tyler Mitchell— showed Styles frolicking in fields and blowing a blue balloon while wearing a Gucci dress. “He’s really in touch with his feminine side because it’s something natural,” Gucci’s creative director, Alessandro Michele, told Vogue. “And he’s a big inspiration to a younger generation—about how you can be in a totally free playground when you feel comfortable. I think that he’s a revolutionary.”

Criticism about the cover’s release burned across the political poles. Conservative pundits cried crisis: One framed the images as proof of the “steady feminization of our men” and “an outright attack” on American masculinity, while another pundit said the cover proves that the Left wants to “feminize men.” The “crisis” language was accurate, but not in the way these talking heads thought. With more than 12 million COVID-19 cases since March 2020 and more than 250,000 deaths from the virus in the United States alone, the enveloping power of this global pandemic is a crisis like no other. And during times of crisis, humans instinctively cling to false but seductive facades of normalcy, grasping at norms, rituals, routines, and beliefs that represent a stable world order. Nothing props up these fantasies better than the rigid comfort of the gender binary. In times of crisis, a man in a dress becomes an immediate threat to the primacy of homegrown, red-blooded American masculinity.

University of Antwerp philosophy professor Bence Nanay explains this desire for stability through Terror Management theory, the idea that confronting crisis, chaos, or simply mortality makes people likely to cocoon themselves in pre-existing ideologies and worldviews. “Conservatives become more conservative and liberals will become more liberal—as both groups will embrace their core beliefs more strongly,” he wrote in an October 2020 Psychology Today article.The ongoing COVID pandemic, he predicts, will “create more of a split in our political landscape.” Definitionally, masculinity is caught in perpetual crisis. Part of the performance is detecting and identifying looming threats to it even in banal, innocuous places. In 2019, the threat came from reusable shopping bags. In 2020, it was embodied in pieces of fabric worn over the mouth and nose to help contain the spread of a lethal virus. And now, it returns, reliably, in a dress. Where have the manly men gone? Chirp the onlookers, made feverish by the electoral defeat of their favorite fascist.

Yet progressives, too, took issue with the glossy entrails of Vogue itself. “Just how revolutionary is Harry Styles’ Vogue cover?” was the skeptical headline of the take in Dazed penned by Daniel Rogers. The Daily Beast answered with a piece by Alaina Demopoulos titled “Harry Styles’ ‘Vogue’ Cover May Be Historic, but It Isn’t Radical.” Both writers are correct in their central assessment that a white cisgender man like Styles may be an alluring poster boy for genderfuckery but should not be positioned as the radical revolutionary that the Vogue cover suggests. A now-viral Twitter thread by @RINYUSHOKUU pointed out there’s a history of “BLACK male artists that aren’t Harry Styles who challenged gender norms in their fashion/enforced androgyny”—among them Prince, Lenny Kravitz, Jaden Smith, and Little Richard, whose death last May was met with a complicated eulogy for a truly complicated life. “For some (including himself) he was at various times, too queer, too Black, too feminine, too close to the devil,” Rebecca Sheehan wrote in a piece for The Conversation after the entertainer’s death. “And yet his gift lay, through music, in transmuting this otherness into a transcendent, shared permission to be free.”

It’s important to remember that Vogue is hardly a bastion of revolution or radicalism. After all, Mitchell became the first Black photographer to shoot a cover only two years ago (thank you, Beyoncé), and is still the only Black person to hold this distinction. Beverly Johnson, the first Black model to appear on the magazine’s cover—in 1974—recently wrote in a Washington Post opinion column that “The fashion industry pirates Blackness for profit while excluding Black people and preventing them from monetizing their talents.” However, this year, as a result of nationwide protests to end police violence and a growing scrutiny of white media leaders, employees at Vogue’s parent company, Condé Nast, broke their silence about the working conditions. “It’s so hard to be a person of color at this company…. ‘You’re asking us how to make our Instagram Black without hiring more Black people?’” Ryan Walker-Hartshort, an assistant to Bon Appétit’s former editor-in-chief Adam Rapoport, told the New York Times.

In other words, it’s no surprise that Vogue moves with an exceptionally glacial pace in acknowledging the Black femmes that have paved the way for Styles’s (turquoise? lapis?) periwinkle-blue number. Alok Vaid-Menon, a gender nonconforming/transfeminine performance artist and author of the recently published book Beyond the Gender Binary, summed up the tension perfectly in their November 2020 Instagram post. “Am I happy to see Harry be celebrated for openly flouting gendered fashion norms? Yes. Do trans femmes of color receive praise for doing the same thing every day? No.” Criticism like Vaid-Menon’s seeks to answer some crucial questions: Who is allowed to play feminine? Who is able to subvert gender? Which bodies are celebrated in the process? Which ones are invisibilized and punished?

I suspect there are also two other conditions that help satisfy our collective appraisal of men’s flirtation with femininity. The first is proximity to masculinity and desire: I dare to wonder, for instance, whether those who are comfortable celebrating Styles’s display of femininity do so in large part because he has already assured that he can fall back on his toned, tattooed, conventionally handsome masculinity at any moment. Is Styles’s display of femininity made more permissible by these very features? Other white, commercially attractive stars like Ezra Miller and Nico Tortorella have similarly made headlines for their brazen declaration of binary liberation; is their disavowal of gender norms made more palatable by their desirability or by the murmurs of masculinity that we know lie beneath? Simply put: Does our celebration of femininity hinge on the body it’s draped over? Brad Pitt’s biceps bulge even in a dress, after all.

The second condition involves distance from heterosexuality. Rumors around Styles’s queerness have been swirling since his years in the boy band One Direction, and his 2019 single “Lights Up” sparked mass attention after it dropped on National Coming Out Day. Lyrics that referenced finding one’s authentic self, along with a sweaty music video dipped in all sorts of bodies, was enough for fans to register the single as a “bisexual bop.” Styles’s response was strategically coy: “Who cares?” It’s true that gender expression and sexuality often dance in quite a synchronous way: Aesthetic choices and performative displays—haircuts, piercings, the length of one’s shorts—have long been used as deliberate signifiers for one’s own sexual interests. Androgynous, femme, and binary-busting fashion have indeed been worn by other men in music—David Bowie, anyone?—to signal their own sexual ambiguity. So it’s fair that Styles, with his own choices in mind, would face similar speculation, but I also wonder how much of our collective demand for a queer Styles only works to legitimize his claim to femininity. Does distance from heterosexuality soften or remedy his break from the binary?

In times of crisis, a man in a dress becomes an immediate threat to the primacy of homegrown, red-blooded American masculinity.

While I’ve personally never seen photos of pop singer Shawn Mendes wearing a dress, I understand that the constant probing of his own sexuality has been cut from the same cloth. “I noticed a lot of people were saying I gave them a ‘gay vibe,’… First of all, I’m not gay. Second of all, it shouldn’t make a difference if I was or wasn’t,” Mendes told his Snapchat followers. For what? A sweet voice, soft countenance, glitter at a Taylor Swift concert? “By putting Mendes in the pigeonhole we want him to belong in, we reinforce the binaries that have punished our community for centuries,” Brian O’Flynn wrote in a 2018 Guardian article. “If we cannot permit men to be feminine without also being gay, then what has our end goal become? Are we content to retire the bonds of heteronormativity on to someone else’s wrists?” These are rightfully asked questions. It’s curious that instead of celebrating men—straight or otherwise—who are purportedly in touch with their feminine side, we choose to interrogate and police how they govern their sexuality. Why? Because to radically reimagine the gendered potential for heterosexual men would be far too dangerous.

Styles might be on the cover of Vogue, but when will actual femininity—not just as a shiny vehicle for consumption or marketing but one woven directly into the fabric of everyday living—truly be in fashion for men? It’s interesting that we might use men’s wardrobe and grooming as signs of “their feminine side,” but don’t further interrogate their behaviors, attitudes, or beliefs. In determining one’s exhibition of femininity, is a dress the best fit? As conservatives plead for the return of “manly men,’” it’s time we ask ourselves what sort of men we’d like to see—or, perhaps more important, what values we want at the bedrock of a more progressive society. In an age of crisis, the answer seems simple: compassion, collaboration, community. Data has shown that women-led nations have managed the pandemic more successfully than their male counterparts.

While some are careful not to employ stereotypes (“emphasizing the stereotypical characteristics of the leaders themselves may reinforce the gendered thinking that helps put macho populist leaders in power,” writes Professor Kate Maclean), even they concede that a more feminine approach to political systems has helped these leaders flourish. It’s time we celebrated femininity beyond its potential for beauty; as we’re all aware, even the devil can wear Prada. Femininity helped Harry make history on the cover of Vogue—perhaps it’s now time we keep it in style.

Read this Next: So Wonderful and Warm 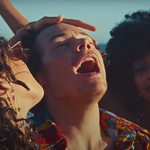