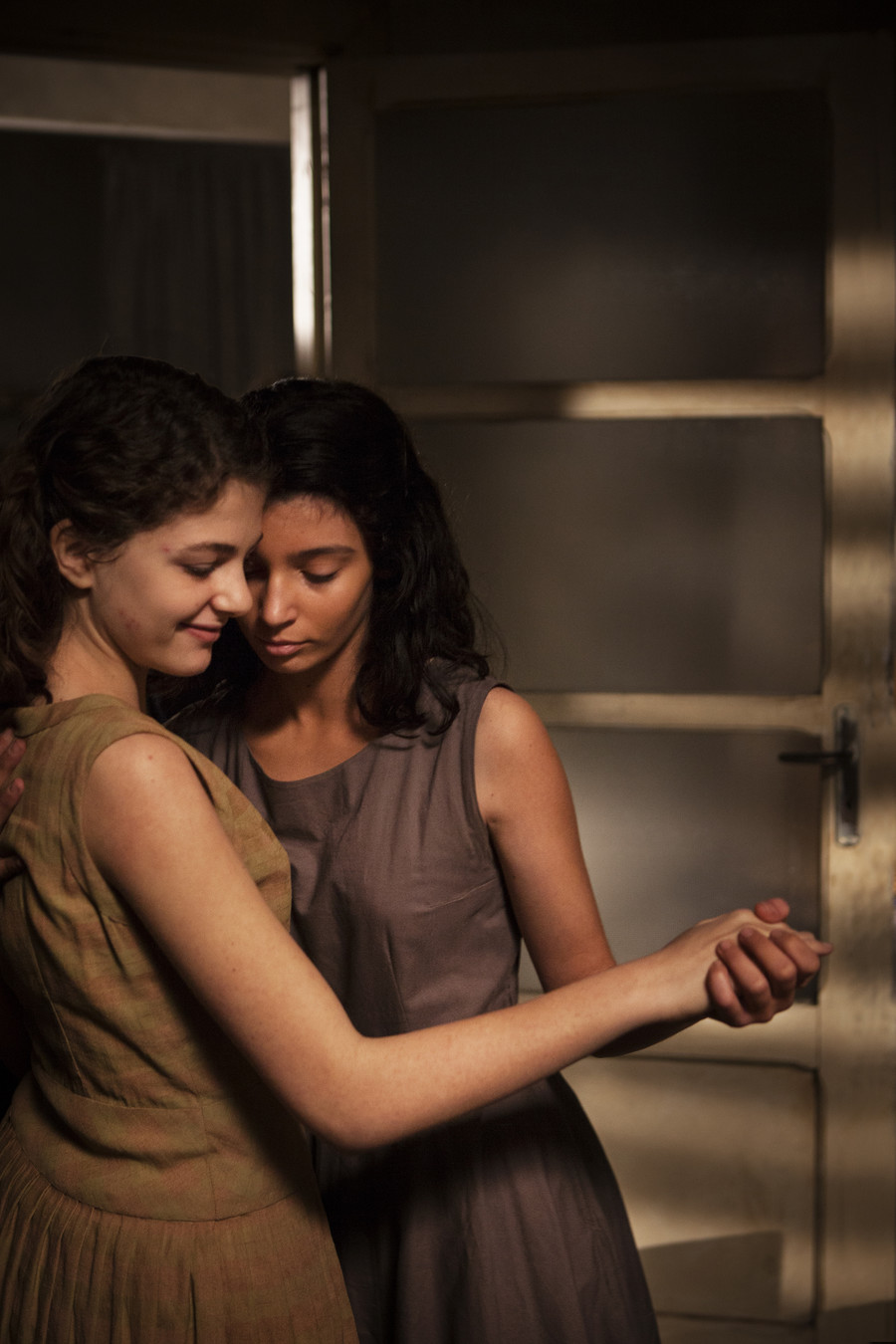 The summer before my senior year of high school, I spent three weeks at a French immersion sleepaway camp. While enrolled, we were contractually bound to speak and read only French, and we consumed exclusively French media. Only one leniency forestalled total cultural isolation: We were permitted to write and receive letters in English. I had forgotten to make note of my best friend’s home address, but assumed the issue would be resolved when she sent her first letter to me. In the meantime, I dutifully wrote to her each day, my first letter swelling into a lengthy diaristic account of my Francophile experiences. Yet she never wrote to me once over those three weeks, and so I never sent her that roving, tome-like epistle. I suspect that I reread it later in the summer and, in a fit of embarrassment, threw it away.

Love her though I did, my best friend oftentimes baffled and vexed me, and I’m certain that she felt similarly about me. I tracked evidence that pointed to her reciprocated affection—the number of weekends spent together, the fond remarks, the articulated assurance that I was her best friend. I was her confidant, but I often worried that my disposition condemned me to need her more than she would ever need me. And like My Brilliant Friend’s Elena—who, in despair, awaits letters from her own best friend, Lila—I grew increasingly agitated that my friend’s silence confirmed my fear.

I won’t go so far as to say that she was my Lila Cerullo, for that wouldn’t be exactly right. But when I read Elena Ferrante’s stunning Neapolitan quartet, and later joined the ardent Ferrante-philes in watching HBO’s diligent, lovely adaptation of the first novel, My Brilliant Friend, I discerned in Lena and Lila’s intimacy a familiar conundrum.Their friendship is good in all the ways that friendship should be good, but it is also, sometimes, piercingly difficult: a love that demands pain through discomfiting, staggering, nearly self-effacing empathy.

The knotted companionship that for 50 years binds narrator Elena “Lenù” Greco (Elisa del Genio, then Margherita Mazzucco in the miniseries) and Raffaella “Lila” Cerullo (Ludovica Nasti, then Gaia Girace), has cracked open a discourse on platonic love between women. Many of us have become utterly enraptured by the duo, singing Ferrante’s praises for her finespun rendering of female friendship. But I also took to heart Teo Bugbee’s fantastic and funny review of the HBO series titled “Are You Going to Fuck Your Brilliant Friend, Or What?” in which she argues that Elena and Lila seem not to share a friendly affinity, but rather a full-blown erotic attraction. Can two girls who aren’t in love possibly endure this psychodrama? Bugbee writes, “If true friendships consume this much energy, then I have spent my entire life friendless.” She continues, “Call me old-fashioned, but if we’re never going to fuck, my threshold for the amount of pain I can endure on behalf of companionship is relatively low.”

The staging and direction of the miniseries certainly toys with the possibility of sexual frisson; as the friends mature, Lila attains a sexual allure that summons men’s gazes like a tidal pull, and Elena, too, is enraptured. Before Lila’s wedding, Elena assumes the duty of facilitating the bridal bath, and when her friend emerges, fully naked, Elena stares with bewildered admiration (the camera insinuates that Elena is seated in direct view of Lila’s pelvis).

Elena and Lila are ensconced in a culture that, despite its fleshiness, solemnly draws an opaque curtain between maidenhood and married life. Body talk is not uncommon among Elena and her friends, and they do experiment with boys (although sexual coercion nearly always looms over their encounters). Still, Elena must realize, as she looks up at her friend, that this bath offers itself as a ready metaphor: She is preparing Lila’s body for a life that has always been presented to them as wholly separate, if not sacred. Her body will be subject to new demands: the carnal proclivities of her husband, pregnancy, and motherhood. But it need not be an either/or scenario: Elena may understand the significance of the day and also be aroused by her brilliant friend’s brilliantly beautiful nudity.

Of course, what I or anyone thinks about their relationship ultimately doesn’t matter. Sometimes we lean too heavily on the word “platonic”—sketching a concept of non-erotic intimacy as something so sacred as to be predestined, an entity apart from circumstances. But friendship, like any other interpersonal arrangement, burgeons at the mercy of socioeconomic contexts. It would be heartening to think that when we care for somebody, and when the roots of our attachment thrust deep and strong in the soil, our environments—however toxic—are powerless to influence the shape and course of our intimacy. And it’s true that friendships adapt to new conditions: marriages, divorces, babies; the tender liminality extends between us like new skin after a fight.

But for Elena and Lila, friendship was always a trickier enterprise because of the violence that forms the background noise to their childhood. When the girls nestle together to read Louisa May Alcott’s Little Women, they’re distracted by a man across the street being beaten within an inch of his life. Elena remarks upon the protracted rage of the neighborhood women who are beaten by their husbands, beat their children in turn, and, when they find a rare untroubled moment, drape themselves over their balconies and swap verdicts on the latest hullabaloo like a Greek chorus. Their insular community is steeped in a poverty that seems unsolvable because only a few families possess money, and everyone else lives and dies at their behest. It is dangerous to desire something more, because no one—whether due to fear, familial loyalty, or some amalgamation—has mapped an escape route, and to do so would be regarded as traitorous. With meager luxuries and little allowance for leisure, neither Elena nor Lila comes of age with the expectation that she should enjoy her life. For this reason, their intimacy becomes a precious, shimmering thread of pleasure and sustenance.

For two intellectually precocious girls who feel as if they’re rattling the bars of an inescapable cage, their intimacy becomes both nourishment and strategy.

When the girls skip school to embark on their ill-fated pilgrimage to the sea, they trade whoops and hollers while passing through the tunnel that extends to the lip of the neighborhood. Their cries, unbound by language or any necessity to account for themselves, echo as triumphant declarations of freedom. As young adolescents, Elena doubts her place in Lila’s affections, and an impulsive embrace after a period apart reassures us that these two girls need one another like a heart requires blood. Mazzucco’s performance as Elena is especially exquisite in its quiet articulation of need: As the two embrace, and Elena nestles into Lila with tenderness and relief, her face melts into the sort of smile that foreshadows a peaceful sleep. Her most cherished relationship is safe.

But safety in any manifestation is a luxury in the girls’ neighborhood, as is liberty. It is not surprising that Elena, who longs for deliverance from a life of domestic turmoil, would become attached to somebody who not only shares her ambitions, but also seems to be a template for salvation. In the novel, Elena narrates, “Something convinced me, then, that if I kept up with her, at her pace, my mother’s limp, which had entered into my brain and wouldn’t come out, would stop threatening me.” For Elena and Lila, friendship is vital, but what we can’t live without is contingent upon the way we are already living. For two intellectually precocious girls who feel as if they’re rattling the bars of an inescapable cage, their intimacy becomes both nourishment and strategy. It also becomes competition: Elena feels her star diminish next to Lila’s easy academic fluency, and their teacher prods the rivalry by consistently ranking them as her two top students.

This isn’t to suggest that Elena and Lila share a mercenary love, but rather that they are surviving in an environment where very little is promised and much of what they do anticipate, they dread. Elena resists falling into rank behind her mother, a woman confined to claustrophobic drudgery who burns with furious resentment, sustains her husband’s blows, and attacks Elena because she sees her reflection in her eldest daughter’s eyes. Lila, whose father throws her out a window when she demands to attend middle school, is desperate to make money—boatloads of it—by whatever method seems most possible. The girls relish their days reading and rereading Little Women, but the impetus for buying the book is practical: Alcott earned money as a writer, and Lila determines that they can learn how to write books themselves by studying one 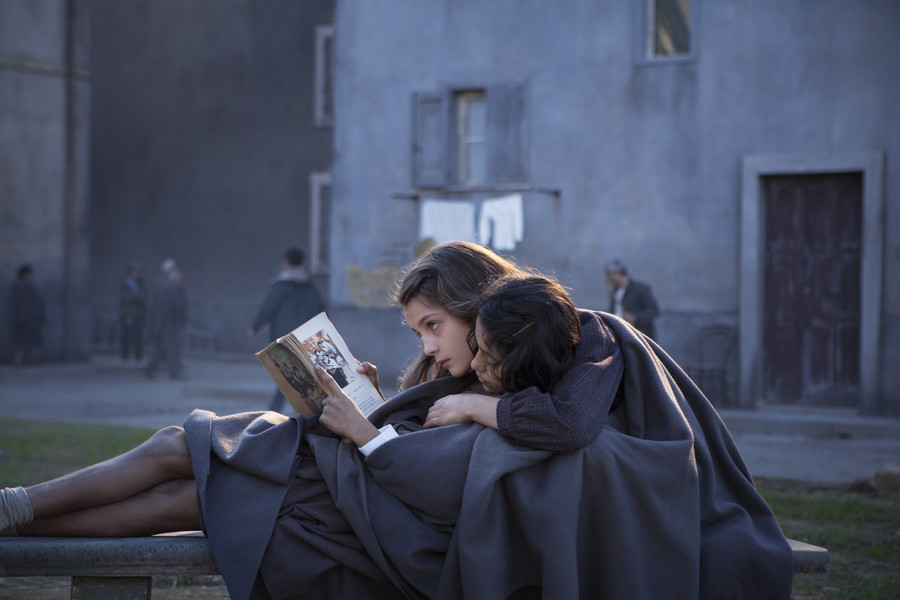 Thinking of pleasure second does not diminish its potency. Elena is no less delighted by Lila because she believes her survival to be tethered to hers. When I watched the reading scene in the miniseries—Elena and Lila tucked against each other on a gaunt courtyard bench—I paused to take an obsessive number of screenshots and replayed the moments in which they recite Alcott’s novel aloud, beating their tiny chests as they proclaim, “My sister!” It seemed to me a perfect rendering of unselfconscious love telegraphed through a united passion.

These passions complicate their relationship, though. Lila isn’t easy to love, and though Elena is too loyal to accuse her friend of jealousy, it’s clear that Lila torments her whenever she feels threatened. She pretends to choose a new best friend when Elena begins middle school, ultimately softening when she realizes that her friend is failing Latin. Though Elena is the only one capable of deciphering Lila’s moods, she is sometimes thwarted by her friend’s stubborn inconsistency. In another life, perhaps they would spend an afternoon carefully parsing the details of their relationship and how they might do better for one another. In this one, they—and especially Elena—must simply trust in the intimacy they have built, and lean on the knowledge that despite the heartaches they inflict and endure, they will always love one another best. There is no time for anything else.

Read this Next: Hide or Fight 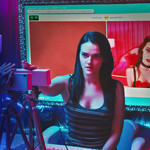 by Jourdain Searles
Alice’s struggles highlight the isolating nature of sex work, and it’s harrowing to witness her try to defend herself and protect her career.