“Paterno” Focuses On Predators and Those Who Enable Them | Bitch Media

As I watched HBO’s Paterno, I kept wondering why the movie had been made. The film is about former Penn State football coach Joe Paterno’s disgraced legacy following a childhood sexual abuse scandal involving former defensive coordinator Jerry Sandusky. Paterno takes place over a two-week period before and after Sandusky’s indictment in November 2011. The movie’s star, Al Pacino, puts on a phenomenal performance as a man trying his best to keep his mental walls up so he doesn’t have to reckon with his own culpability in the abuse of young boys. But Pacino can’t save the film from looking in the wrong direction.

Paterno was akin to god on the Penn State campus. He coached the football team for 45 years and was the winningest coach in major college football history. There was a statue erected in his honor and he was admitted into the College Football Hall of Fame—before he retired. But this movie should have focused less on Paterno’s downfall and more on the victims, including Aaron Fisher, the only victim given a peripheral storyline. As one character in the film says, “I honestly don’t know why anyone’s talking about Joe Paterno. Somebody six months from retirement failed to see the big picture and didn’t vigorously protect children? Of course you goddamn fire him. It’s spectacularly unworthy of conversation. A crime against children happened. Why the heck is anybody talking about Joe Paterno?”

Yet, the movie spends most of its time only talking about Paterno while also never quite revealing how much he actually knew about Sandusky’s crimes. It’s a question that can never fully be answered, though Penn State’s athletic director Tim Curley, vice president Gary Schultz, and president Graham Spanier were all convicted for child endangerment. 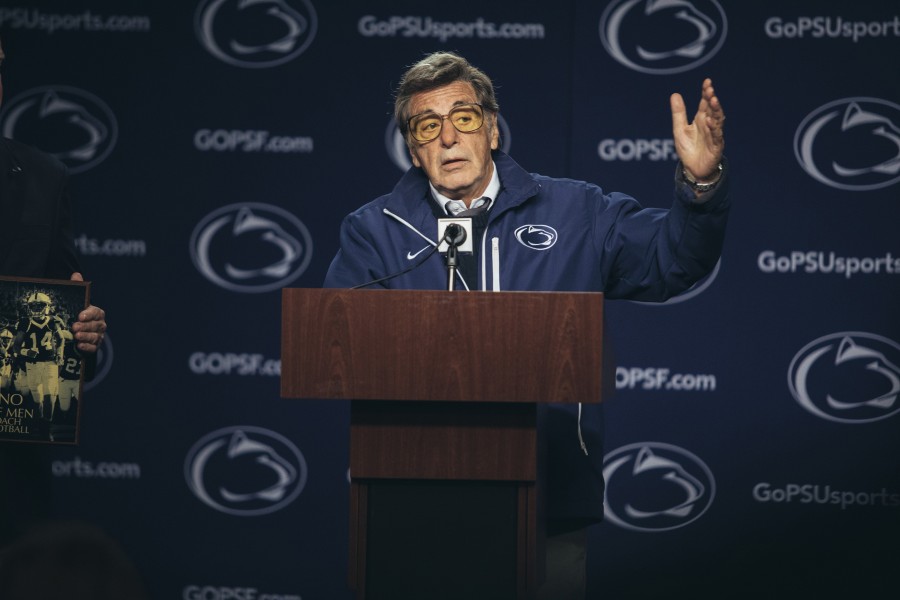 Paterno died from cancer in January 2012, just two months after the case against Sandusky became public. He died before old emails revealed that he knew much more than he said he did and before other alleged victims said he’d known about the abuse as far back as the 1970s. The movie hints at this: It ends with reporter Sara Ganim talking on the phone with someone who told Paterno about being abused by Sandusky in 1976. The movie also shows Paterno’s name in emails between the major players at Penn State addressing the Sandusky concerns, but there are still no concrete answers. It’s a hole in the story that will likely never be filled and the filmmakers don’t do a good job getting around it or simply addressing it head-on.

Sandusky doesn’t utter more than a few words in Paterno; he’s only seen through flashbacks from Paterno’s memories—though he was eventually convicted of 45 counts of child sexual abuse. And Ganim, the 24-year-old rookie reporter who won a Pulitzer Prize for breaking the story, is also a subplot. It’s worth asking, as one of the characters did, why HBO felt the need to focus on Paterno—who was a subplot in the actual scandal—and elevate him to a starring role.

Yes, he’s probably the most well-known person involved in the scandal, but taking the focus away from the victims and the impact of childhood sexual abuse reflects a larger failure in how we handle sexual violence. We don’t know how to grapple with the ugliness of what sexual violence does to victims. Instead, it is easier to focus on how the violence might negatively impact the perpetrator’s life (think Brock Turner), or how it might have affected a famous college football coach.

It’s hard to watch Paterno without thinking about Larry Nassar, the United States Olympic Committee doctor who sexually abused over 100 gymnasts, and Michigan State University, the institution that worked for decades to cover up his crimes. These two stories share so much commonality: elite athletic programs, institutional coverups of child sexual abuse, and local journalists finally breaking the story. The coverage of the Nassar sentencing centered the victims, but that’s thanks to a judge who insisted on letting them speak and the high-profile gymnasts, including Olympic gold medalists, who were abused.

Paterno, however, isn’t really about these elements. Instead, Paterno is painted as a pathetic, sad, and small man who was so single-mindedly focused on football that he was willing to ignore Sandusky’s crimes. While Paterno was unknowingly dying while facing a very public fall from grace, it’s still impossible to empathize with him. I don’t think Paterno should’ve been framed as a sympathetic character, but successful movies help the audience empathize with the “hero.” Interestingly, the day that Paterno spent sobbing with his former coaches wasn’t included in the movie, despite appearing in Joe Posnanski’s 2012 book, which served as source material.

A more-appropriate look at the Sandusky case would focus on Gamin’s initial reporting and her building a relationship with Fisher to break the story. It would show Fisher’s struggle and commitment to bringing Sandusky to account so no other boys would be hurt. It would lift up other survivors and amplify their stories. Paterno should’ve been relegated to the sidelines where he belongs: a footnote to the story as a disgraced man who didn’t do enough to stop a predator and stood idly by while children were abused.

When Women Are Always the Heel

Jeannie Vanasco on Processing Rape by Writing About It