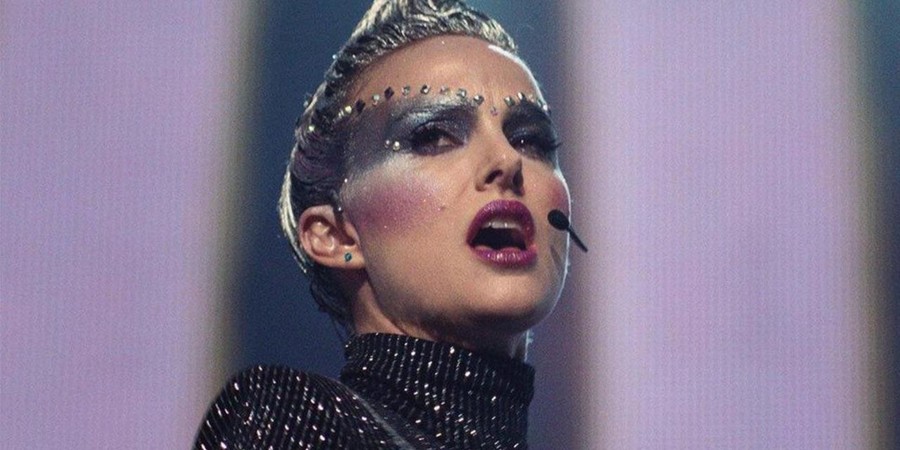 2018 was the year of (white) female musician narratives at the Toronto International Film Festival. There was the newest remake of the showbiz classic A Star is Born, the charming youth confection Teen Spirit, the underdog tale Wild Rose, and, most controversially, the one-two punch of Her Smell and Vox Lux. Departing from the mostly kind portrayals and crowd-pleasing nature of the other three films, Alex Ross Perry’s Her Smell and Brady Corbet’s Vox Lux offered up portraits of female artistry riddled with drugs, abuse, sex, and cinematic anarchy. The allure of two films about female antiheroes was absolutely a draw; but though I enjoyed both, my patience with their narratives lasted only until their halfway points. Both films use time jumps in service of advancing their narrative—but in doing so, they also bypass organic character development and fail their fascinating protagonists.

Her Smell is Perry’s sixth film, and his second starring vehicle for Elisabeth Moss (the first was 2015’s psychological thriller Queen of Earth). Perry treads familiar territory here, with Moss once again embodying a woman mid-breakdown, alienating everyone in her life as she falls deeper into her own madness. Moss’s Becky Something, the lead singer and primary songwriter of an all-girl alt-rock band called Something She, is talented, charismatic, and at the mercy of a drug addiction that inflates her ego and renders her delusional. The first half of the film chronicles Becky’s descent to rock bottom as she harrasses, abuses, and annoys everyone around her. It’s tempting to compare Becky to Courtney Love, but Moss herself suggested in an interview with Indiewire that her character could just as easily be Axl Rose.

As a ranting, drug-addled mess, Moss is magnetic, drawing your eye to her every move in an Oscar-worthy performance. Becky stalks her family, friends, and bandmates like prey, making Her Smell feel like a slasher movie without the kills, or American Horror Story without all the rape. The dim lighting, spinning camera, horror aesthetics, and pulse-pounding score of Her Smell’s first act was disorienting; at the TIFF press screening I attended, many critics abandoned the theater before the film’s halfway mark.

The walkouts continued throughout the remainder of the runtime, even after the film time-jumped to its much milder second half, in which we watch Becky try to rebuild her life after recovery. Here, the film’s previous aesthetic frenzy has been replaced by a washed-out look and somber tone; its manic, egotistical spotlight hog is now a woman so afraid of personal contact that she holes up in her home far away from New York City and hasn’t played a crowd in years. But despite expository dialogue, it’s never quite clear how exactly things got this way for Becky. The time jump skips over all the hard parts of recovery—detox, treatment, counseling—leaving us with the clean aftermath.

Elisabeth Moss as Becky Somebody in Her Smell (Photo credit: Bow and Arrow Entertainment)

Similarly, the time jump that bisects Vox Lux, Her Smell’s sister in discord, dramatically recalibrates the narrative and tone established in its first half. Like Corbet’s subtly disturbing 2015 debut, The Childhood of a Leader, Vox Lux uses a chapter structure to animate his troubled protagonist. But unlike Leader, which focuses steadily on the protagonist’s childhood development, Vox Lux divides its runtime evenly between childhood and adulthood, giving most of the nuance to the former while underwriting the latter.

Vox Lux begins as a film about a devastating tragedy and its aftermath. Celeste (played as a child by Raffey Cassidy) is one of the few survivors of a school shooting; along with her sister Eleanor (Stacy Martin), she writes and performs songs that give voice to their complicated feelings of sadness, fear, and loss. This begins Celeste’s rise to pop stardom, and her sister’s quiet support along the way. The familial chemistry between Cassidy and Martin is achingly believable, as is their soulful portrayal of kind young women grappling with unthinkable trauma. It’s a beautiful tale of resilience and finding light in the darkest circumstances—until the disconcerting time jump.

In this narrative void is Celeste’s ascension to stardom, as well as her development into an adult. The grown-up Celeste of Vox Lux’s second half (Natalie Portman) is, not unlike Moss’s Becky Something, a constantly drunk, coked-out hurricane who neglects her daughter (played, cleverly, by Cassidy) and rants nonstop about how everyone is out to get her. Eleanor, meanwhile, has raised Celeste’s daughter and continues to write all of her songs. The sisters’ once-steady bond is irrevocably broken, and, for Eleanor, has been replaced by an uncomfortable one with a manager (Jude Law) who is both fatherly and sexual toward her.

It may not be coincidental that Vox Lux and Her Smell, both written and directed by men, use time jumps as a narrative cheat code for not explaining the behavior of their female characters.

In contrast to Moss’s feverish mania, Portman’s performance borders on parody; she plays adult Celeste as if she’s in an extended version of her comically overwrought Saturday Night Live digital short. Celeste comes across less as a woman haunted by decades of trauma than as a spoiled brat with a persecution complex, using the tragedy of her childhood to justify terrorizing everyone in her orbit. The time jump fails to reconcile her empathic, creative youth with the caricature she’s become, a discordant note made more apparent by the fact that her daughter is played by the actor who portrayed her teenage self.

Had the film shown us what happened between nuanced teenhood and bombastic adulthood, there would at least be more context for Celeste’s paranoid wreckage. Instead, the gap feels like a narrative convenience, a visual display of cause and effect rather than narrative logic. (In an interview for Screen Daily, Corbet explains that he saw the time jump as “a more exhilarating way to discover the detail of the character and her life experience.”) It’s clear that the idea of cosmic inevitability is central to Vox Lux, but simply insinuating that the violence of American culture and trappings of celebrity would turn any sensitive young woman into a cruel diva is the simplistic moral of an Afterschool Special.

It may not be coincidental that Vox Lux and Her Smell, both written and directed by men, use time jumps as a narrative cheat code for not explaining the behavior of their female characters. When used well, time jumps allow us to know more about the characters, using small moments to establish continuity as well as to display incremental character shifts. (This is something American Woman, another TIFF film with a female lead directed by a man, does much better.) Simply showing a behavior without providing us an inkling of where it came from does a disservice to the characters, the plots, and the audiences. Both Her Smell and Vox Lux are interesting to watch, but fall short as full studies of complicated women.

Backtalk: What About “Us”?

The Women of "Iron Fist"

“Hustlers” Explodes the Damaging Stereotype of Sex Workers as Thieves