Alicia Keys Finally Finds Her True Self On “Here”

Alicia Keys is a different musician these days. The superstar singer-songwriter and pianist has recently chosen to prioritize her womanhood, motherhood, and philanthropic ambitions over the accolades she’s stacked up in her 16-year career. Since her 2001 debut Songs in A Minor, Keys has stayed rooted in R&B, but has been unafraid to experiment in pop, rock, and even electronica. On her sixth studio album, Here, she steps fully into her spiritual, political, and socially conscious self. It’s a rebirth of sorts, as the singer, songwriter, and pianist showcases her confidence and finds a deeper sense of love for herself and the music she makes. The storytelling is strong throughout Here, and Keys sounds more authentic than ever.

“Work On It” and “Girl Can’t Be Herself,” wherein Keys challenges beauty standards and finds her own independence, reveal a truer sounding musician than she’s let show prior to Here, and dovetails with her recent emphasis on natural beauty and a sustainable lifestyle. “More Than We Know” and “Where Do We Begin Now?” make the personal political, as she aims to motivate political action and raise consciousness about what’s at stake. The music on this record is stripped down to essentials—this is not a Hollywood version of Alicia Keys. This is an activist and a woman owning her image and vision. It’s deeply personal and simultaneously relatable, even when Keys assumes the persona of a 29-year-old addict on “Illusion of Bliss.” Perhaps the record’s most anthemic track, “Blended Family (What You do for Love),” finds Keys opening up about her relationship with her partner Swizz Beatz and the overpowering amount of love that has stitched their families together: “Hey I might not really be your mother/ That don’t mean that I don’t really love ya/ And even though I married your father/ That’s not the only reason I’m here for ya.” Keys has built a career blending balladry with hip hop, and Here uses them to reveal a more multifaceted, earnest artist and self than ever before. 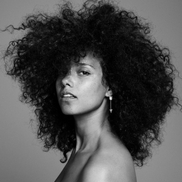 Relevant: Beyond Binaries and Convention

by zaynab shahar
I am not interested in having white Americans take my family’s tongue and practices for some poetic getaway.