No Men Allowed: Can the Dream of a Women’s Utopia Return? | Bitch Media

No Men AllowedCan the Dream of a Women’s Utopia Return? 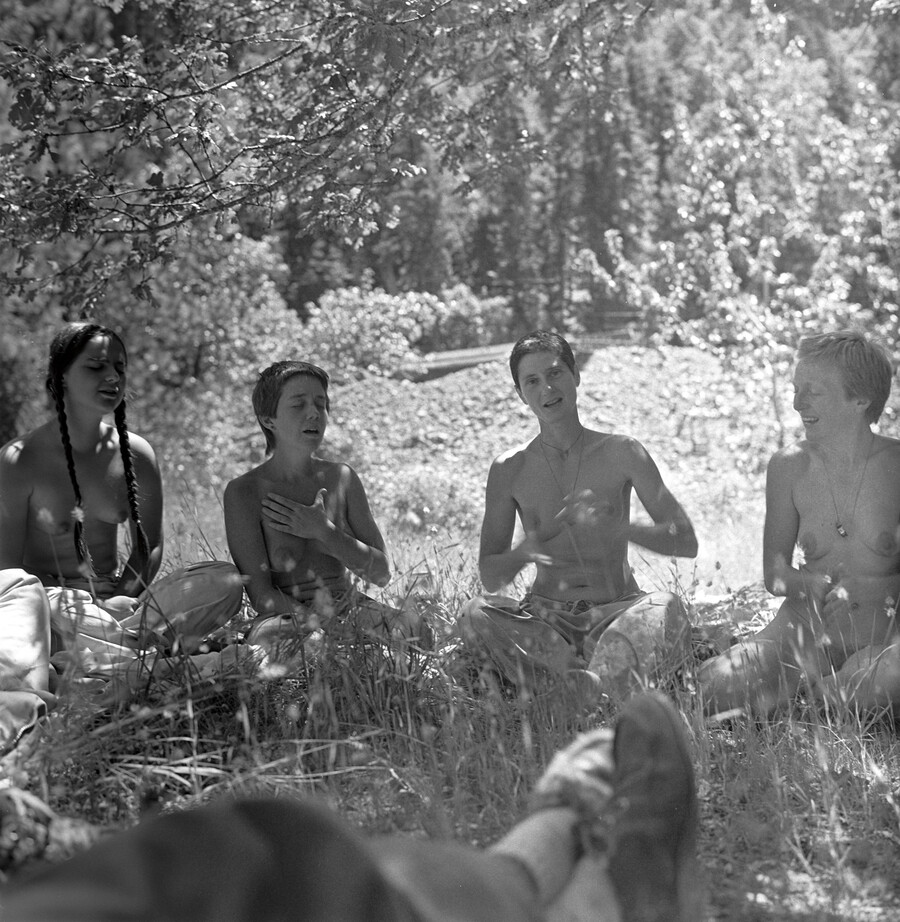 Photograph from the Ruth Mountaingrove papers, 1950-1999 / University of Oregon

This article was published in Wild Issue #92 | Fall/Winter 2021 Subscribe »
In 1915, Charlotte Perkins Gilman published Herland, a novella about three men who learn of a land inhabited only by women. En route, each speculates on how this society might function. “They would fight among themselves…women always do,” suggests one. Another guesses that they live harmoniously, like in a convent. The third argues that nunneries are peaceful only because the women there are celibate, as where there’s motherhood, “You don’t find sisterhood.” What all three agree upon is that without the influence of men, these women will surely be living primitively. Instead, they find a fully functioning society more advanced than their own, where women are able to reproduce asexually and have no need for men.
Other than the ancient Greek Amazons, the concept of a female-only society has been mostly a thought experiment. Even matriarchal societies, such as the Hopi and Haudenosaunee, don’t prohibit men. The desire to set up an intentional space banning other genders is what led second-wave feminists in the ’60s to set up off-the-grid communities known as womyn’s separatist lands. With lesbian relationships unsafe in most parts of the United States, these were places where women could live as their true selves. New residents learned about these places through feminist newsletters and magazines, as well as through word of mouth among radical feminist communities. It was rare for new residents to arrive with the skills necessary for this type of life. Those who lived in these lands were responsible for all tasks, from clearing land and trenching for well-water lines to constructing buildings and repairing automobiles.

As Sue Deevy et al. state in 1976’s Country Lesbians: The Story of the WomanShare Collective, “Clearly the larger culture [had] not provided us with many models for the way we want to live, to be, to create the new world we want to create. Living together we can be models for each other.” That said, the traditionally feminine skills some women may have already possessed, such as cooking and sewing, were also necessary—if often more grudgingly performed by residents keen to try something different. Childcare was a touchy subject, and different collectives handled the issue in various ways. Some strove to raise children communally, while others preferred mothers to balance their children’s needs with those of the community. The use of womyn in place of women in the name of these lands speaks to their gender-essentialist nature. Many womyn’s separatist lands adhered to a strict lesbian separatism that disallowed men and boys as well as trans, straight, and bisexual people. The goal was to create a homogeneous community of cis (and mostly white) lesbians in order to free themselves of patriarchal culture and the male gaze. Of course, without the asexual reproduction of Herland, children born in these communities could be any gender. The maintenance of its single-gender society meant that some communities forbade male children, meaning that parents of sons might be asked to leave.
Herland’s concept of an all-female state is constrained by the culture in which it was written and by Gilman’s racism, nativism, and admiration for eugenics. Eugenic principles are the basis for this seeming perfection: It’s the reason their plants grow perfectly and the air is never smoggy. Population is strictly controlled through the practice of discouraging women with less-preferred traits from having children. The three outsiders who admire these women also admire this plan, with the narrator stating, “There is no doubt in my mind that these people [are] of Aryan stock.” One primary goal of all womyn’s lands was to empower their residents. However, gender is but one piece of the power systems that disenfranchise marginalized people. As much as womyn’s lands promised a utopian lifestyle outside of mainstream society, their existence depended on racial, class, and income disparities. Women with the financial means and social capital to exit society were overwhelmingly the founders of separatist communities because they were most likely to have the money to purchase land. The result was that these places were populated mostly by white women who brought a tangled web of racism, class inequality, and homophobia with them.
The overlapping marginalizations of being a lesbian of that era made the choice to escape mainstream culture straightforward for many women. Barbara Lieu, the current property manager of a womyn’s community called Alapine and a longtime resident, recalls about her life in the early ’70s: “You couldn’t get a credit card in your own name. People wouldn’t loan money to women, even if they had jobs and money to buy a house. We could be beaten by the police for wearing the wrong clothes, for wearing pants.” Other founders and residents came to lesbianism later in life, sometimes as an offshoot of politically based lesbianism, taking literally the aphorism “feminism is the theory, lesbian is the practice.” A staunch belief that opposing the patriarchy meant rejecting men in all circumstances thus necessitated that romantic relationships could only be same sex. The majority of residents came from similar backgrounds: white, middle-class, college-educated cis women from urban upbringings. Their utopia automatically excluded other women. In 1980, Puerto Rican writer Juana Maria Paz described an Arizona separatist land where she briefly attempted to live as “mostly a retreat for white womyn who have fled the middle class.”
Just as the women of Herland were able to create an idyllic community by excluding those unlike themselves, separatist womyn’s lands simultaneously provided an escape for some while abandoning others. As Shelley Grosjean wrote, these women were not “looking for a formal equality within the existing patriarchal system but for true autonomy in labor, culture and spirituality. For the women joining lesbian intentional communities, autonomy could only come to fruition through the creation of a unique and separate female existence and culture.” In this, they were initially successful. However, as time passed and the feminist movement progressed, interest in separatist lands decreased. Currently, there are less than 100 of these communities left in the United States. While life off the grid has its appeal, a daily existence defined by outdated notions of gender is not the lure it once was. Younger generations have increasingly become disinterested in women-only spaces such as women’s bookstores and lesbian bars. In the modern era, the concept of separatism is not the call to freedom it was in the ’70s, but is most often now synonymous with cults, propaganda, and hostile exclusionism.
Today, there are new types of intentional communities such as ecovillages and lgbtq retirement communities. Similar to the overwhelmingly white, middle-class populations of womyn’s lands, these modern communities continue to cater to and attract those with the economic and racial privilege to opt out of mainstream society. The continued existence of these intentional communities suggests that the promise of a new, ideal world continues to appeal to those who are disenchanted with the one we’re all living in. To those who found happiness and escape in womyn’s lands, the price of their personal happiness was that of abandoning those who were unable to join them. 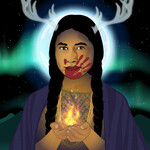 by Abaki Beck
These writers are resisting the long impact of colonization and Christianity, which forced Indigenous communities to either hide or abandon their stories.
by Ann Foster
View profile »