If the “bad case of nerves” Kat Kinsman grew up with and still works to manage has been somewhat monstrous (and it has), the title offers a clue to how it’s rendered here. Hi, Anxiety is a friendly introduction to the consuming panic of Generalized Anxiety Disorder (GAD), and the apparent superpowers Kinsman has developed in response. The crushing weight of illness is given a breezy destigmatization here, thanks to blunt honesty and gentle humor.

Her close-knit family often revolved around Kinsman’s mother, “Mumsie,” who suffered a variety of mental and physical ailments that required near-constant care, reassurance, and medication. While Kinsman sees an eerie future in her mother’s decline, she nevertheless navigates past horrendous relationships and meets and marries a seemingly solid guy. Holding a range of remote jobs (did you know Yoo-Hoo had a webmaster?) led to using her design skills, then writing, then a series of employment level-jumps for which she continually qualified herself after the fact. By working overtime to build in any of the skills she didn’t already have, Kinsman’s perfectionist tendencies made her a standout employee. If there’s an upside to anxiety, it may well be that the fear of being “found out” can sometimes lead to actual greatness.

Short chapters break up the narrative with snapshots of Kinsman’s particular irrational fears: getting a haircut, a trip to the dentist, driving, being a passenger in a car. These are the funniest parts of the book, and most readers will relate to the way a fear can quickly magnify; Kinsman dropped off a pair of beloved shoes for repair, but neglecting to pick them up led to worry that she’d be judged, or the shoes would be gone, or perhaps both, which keeps her walking past the shop without entering. Her fear of alternative remedies is more an annoyance at having them endlessly recommended to her. She plans out a ritual that involves flicking the next person to suggest “mindfulness” in the forehead while their eyes are closed, and goes on to describe having a mini panic attack while in corpse pose, after which she had to fake feeling relaxed for the yoga teacher’s benefit.

Kinsman is a terrific writer. Her humor is low-key and playful considering the seriousness of the subject matter. “(Panic attacks) may be triggered by specific things (driving, crowds, clowns, crowds of driving clowns)…” If you live with GAD, Hi, Anxiety makes it clear you are not alone, and while you may not choose to pursue employment as a dominatrix to find your confidence, hey, don’t rule it out just yet; it served the author pretty well. For everyone else, this book offers insight into the ways anxiety tries to crush those in its clutches, and the beautiful and strange ways they bloom into being in spite of it. 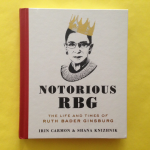 by Sarah Mirk
The fun and engaging biography of the Supreme Court justice feels like a scrapbook for legal nerds.