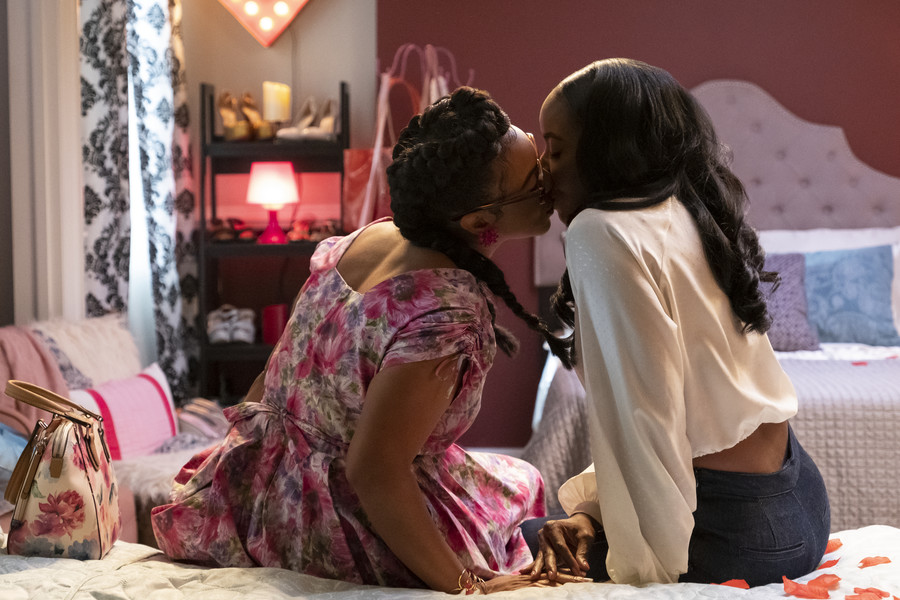 There’s recently been a much-needed shift in television’s approach to portraying Black lesbian relationships: Characters are being given more complexity onscreen, as they are offered the chance to explore their queerness in ways typically reserved for white queer women.

Ellen DeGeneres, who made headlines when she came out on “The Puppy Episode” of her ‘90s comedy series Ellen, is considered the start of representation for white lesbianism on television (though she wasn’t the first lesbian on screen, she was the game-changer due to her reach and popularity). Though “The Puppy Episode” earned awards and acclaim, ABC’s advertisers were less than thrilled. The network cancelled Ellen after airing one additional season. Later, Buffy’s Willow Rosenburg (Alyson Hannigan) explored relationships with women that began as subtle physical connections and became much more overt as the series went on. Rosenberg shared her first onscreen kiss with another woman during the Season 5 episode “The Body.” Lesbianism on television also took a dramatic turn on the-N teen series South of Nowhere, with protagonist Spencer Carlin (Gabrielle Christian) questioning her sexuality after befriending her openly lesbian classmate Ashley Davies (Mandy Musgrave). Shows ranging from The L Word, which wrapped in 2009, to Netflix’s Everything Sucks (2018) feature well-rounded white lesbians who are given depth.

However, thoughtfully crafted Black lesbians are still an anomaly on TV. Overall, there are still pervasive stereotypes about Black women that bleed into pop culture: they’re desexualized or sex-crazed, aggressive or passive, anti-male or existing solely for the male gaze. Their identities are often unclear, with few Black lesbians proclaiming themselves as such. Altogether, these limited character formulas leave little to no room for Black lesbians to be fleshed out, and an even smaller possibility for their characters to be at the center of a multidimensional storyline. And when these stories are told, there tends to be a male protagonist whose storyline overshadows theirs. For example, Spike Lee’s 2004 film She Hate Me centers on Jack Armstrong (Anthony Mackie), a sperm donor who’s in high demand among some lesbians in New York City, including his ex-girlfriend Fatima Goodrich (Kerry Washington) and her girlfriend Alex Guererro (Dania Ramirez). It’s still rare for the narrative to prioritize the Black lesbians themselves in a real, human way.

Historically, Black lesbians have been mostly depicted in indie films, including The Watermelon Woman (1996), Mississippi Damned (2009), and Pariah (2009), which often limited their reach. While both The Women of Brewster Place and The Color Purple (1985) shined a brief light on Black lesbianism, there hadn’t yet been a film or series that migrated beyond a surface-level trajectory and really delved into Black lesbian experiences. If Black lesbians weren’t struggling with their identity, they were being confronted or even isolated by their families. Take bible-thumping mother Audrey’s (Kim Wayans) dysfunctional and abusive relationship with her butch daughter Alike (Adepero Oduye) in the 2011 indie film Pariah or Theresa (Paula Kelly) and Lorraine (Lonette McKee) being treated as outcasts in the 1989 TV adaptation of Gloria Naylor’s 1982 book The Women of Brewster Place. Though Brewster Place is a tenement that’s primarily run by Black women, Lorraine still struggles with internalized homophobia: She refers to a nearby nightclub as the home of “fags” and avoids being seen in public with Theresa. Lorraine’s fears are warranted as she’d been pushed out of a teaching position in Detroit because of her sexuality, and an intrusive neighbor, Miss Sophie (Olivia Cole), intentionally outs her and Theresa to get them shunned by the neighborhood.

Prior to the 2000s, Black lesbians were rarely physical in film. If there was a glimmer of intimacy, it resulted in one partner being hushed, notably in 1996’s Set It Off when bank robber Cleo Sims (Queen Latifah) dates a woman named Ursula (Samantha MacLachlan). Despite Sims’s loud, gun-toting bravado, Ursula is virtually mute and detached throughout the film, until later when she cries after seeing Sims gunned down on television. The Color Purple, an adaptation of Alice Walker’s 1982 novel, suggests a lesbian relationship between nightclub singer Shug Avery (Margaret Avery) and docile, battered protagonist, Celie Harris Johnson (Whoopi Goldberg). (The book is much more explicit and definitive about their relationship.) Though Celie and Shug share a kiss, their sex scene in the book was expunged from the film to prevent homophobic backlash. This minimizing of physical intimacy has started to shift: Though Netflix’s adaptation of She’s Gotta Have It has been called out for queerbaiting, Opal Gilstrap (Ilfenesh Hedera) and Nola Darling’s (Dewanda Wise) relationship is worth watching. Season 3 opens with an unflinching sex scene between Darling and Gilstrap, and rather than catering to the male gaze, the two are fully intertwined—clasped fingers and all—in a way that truly prioritizes their pleasure rather than that of male viewers. 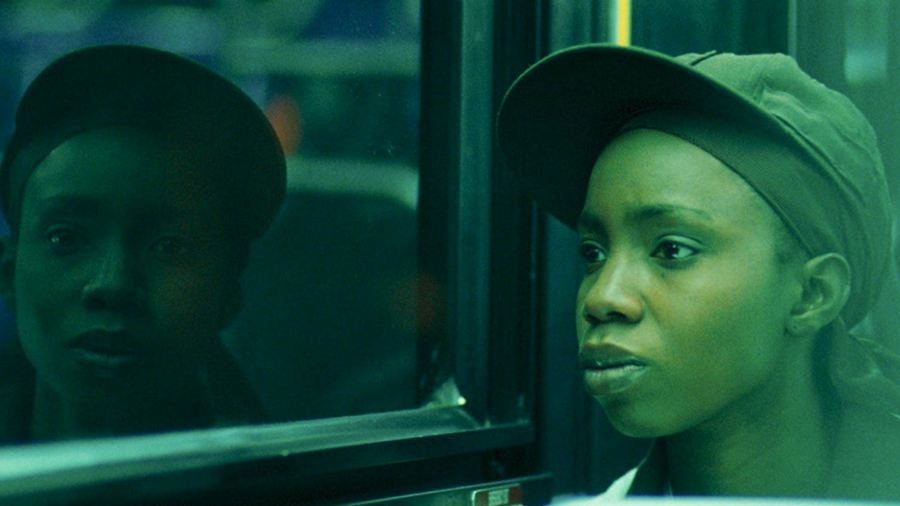 Black lesbians aren’t perfect, and that should be reflected onscreen. Take Dear White People for example: After “running out of lesbians in one semester,” Kelsey Phillips (Nia Jerver), a junior at Winchester University, decides to stop dating. Then, she’s corralled by bicurious friend Brooke Morgan (Courtney Sauls) to begin dating. As Morgan shamelessly flirts with Phillips following a meaningless stint of random hookups with men, she voices her interest in giving women a try. Phillips forwarns Morgan that “the lady pond is already cloudy enough without a straight-but-curious girl dipping a toe.” Somehow, this encourages Morgan to up the ante on her seemingly futile attempts until Phillips clarifies her lesbianism and explains why she’s nervous about pursuing anything with Morgan: “I don’t want to be just some part of an experiment, so if you’re on some sort of sexual journey, please don’t make me a stop along the way.” Phillips says after romantically decorating her dorm room for a tryst with Morgan. Emptily assuring Phillips that the two are connected, the next morning, Morgan awkwardly dodges Phillips’s invite for another date, instead texting a male suitor while she’s still in Phillips’s bed. With Morgan continuously giving Phillips the cold shoulder, it becomes clear that Morgan was using her to fill an experimental void, and had no plans of taking their relationship further.

As the third season of Dear White People focuses keenly on LGBTQ students, Phillips and Morgan’s affair is solely based on Morgan’s unfulfilling relationships with men rather a true connection that takes Phillips’s feelings into consideration. The move was opportunistic, a dynamic that’s also captured in Pariah. While the teenage Alike wants to date Bina (Aasha Davis) after the two have a sleepover, Bina rebukes her motives, saying that they were just having fun. Similarly, the relationship between Morgan and Phillips plays into the stereotype that WLW relationships are simply disposable girl crushes. While Dear White People and Pariah can be critiqued for leaning into this trope, it’s noteworthy in the sense that Dear White People is giving Black queer women the space to make mistakes and to question their sexualities, something typically reserved for white characters and actresses. A large part of this is demand for more human characters.

TV writers have begun listening and adhering to an overwhelming insistence from lesbian audiences that lesbians be progressive characters who are treated with the same care afforded to straight characters. Actress and screenwriter Lena Waithe has played a large role in this, beginning with the Master of None episode “Thanksgiving,” which garnered Emmy-winning acclaim. The episode follows Denise (Waithe) as she attempts to come out to her family over the span of nearly 20 years.

Now, Waithe is bringing former YouTube series Twenties to the small screen in a feat that further illustrates her dedication to showcasing Black lesbian stories. The forthcoming BET series will revolve around Hattie, a queer Black woman who comes to terms with her sexuality with the help of her straight friends Marie and Nia. As Waithe’s passion project comes to life, it provides additional space for Black lesbian visibility in television, breaking down barriers for women who deserve to see themselves fairly personified. In 2019, Queer Black women viewers expect the characters that represent them to have range, and the complexity of their relationships to be visible, rather than miniscule or unseen entirely. Millennial and Gen-Z audiences are more open to queer representation, and there’s an urgency for media to reflect the times. Moving ahead, television can continue the pace of diversifying the writers’ room, especially with queer Black women, to fulfill these narratives.

Read this Next: Nova, Nola, and Annalise

Jaelani Turner-Williams is a writer based in Columbus, Ohio, and a Senior Contributor for the city’s entertainment guide (614) Magazine. Along with (614), she has also written for the likes of Remezcla, Okayplayer, Vinyl Me, Please and more. Jaelani focuses strongly on cultural pieces, especially within the realm of music and social criticism.