Queerness Shines in “She-Ra” and Other Animated Shows 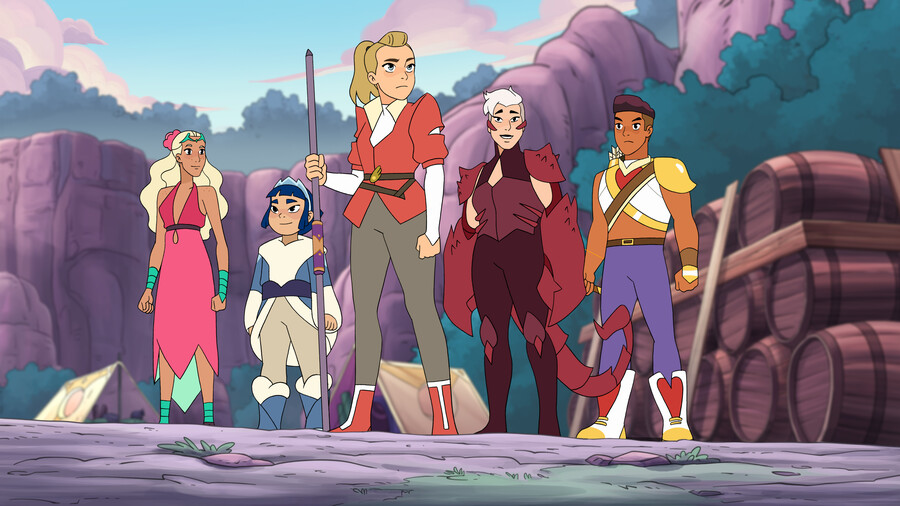 Growing up, queer kids, myself included, didn’t get to see ourselves in U.S. cartoons. Scattered across the years were a few background gay characters, like Mr. Ratburn (Arthur Holden) on Arthur, or Patty (Julie Kavner) on The Simpsons; if they aren’t entirely canon, they’re confirmed outside of the show’s universe by creators, as was the case with Ren (John Kricfalusi) and Stimpy (Billy West) in their popular ’90s cartoon, and Orka (Bobby Moynihan) and Flix (Jim Rash) from Star Wars Resistance. Never did we get to see ourselves as main characters and part of the primary romantic arc like our straight counterparts. The message out there for young people was that straights get to have fulfilling personal growth and relationships—and queers and queer romance don’t exist.

Mainstream networks want to appeal to as broad a base as possible, and while the majority of people in the United States support LGBTQ marriage and LGBTQ rights, by erasing those relationships from view, networks hope to simultaneously keep both homophobic and LGBTQ supporting audiences hooked on the shows and avoid backlash. That’s the reason companies dole out queerbaiting crumbs of incredibly subtle representation in Beauty and the Beast (2017) or The Rise of Skywalker (2019) without the meaningful impact of clear-cut queer representation in main characters with a story arc.

In 2014, I came out as a baby-bi in my second year of college, a year also marked by the Legend of Korra finale, “The Last Stand,” which historically revealed its protagonist to be bisexual. With time, Korra wasn’t the only cartoon where I saw myself onscreen, with shows backed and produced by queer creators like Steven Universe (2013-2020), Adventure Time (2010-2018), and She-Ra and the Princesses of Power (2018-2020) all making landmark strides for LGBTQ represenation. What garners the success of these series is that they show queer romance throughout, let it breathe, and have a diversity of portrayals. While Korra broke new ground for queer main characters in 2014, this year’s season of She-Ra, cartoonist Noelle Stevenson’s reboot of the ’80s series, has brought us much further with a queer central romance, which was planned from the beginning and essential to driving the main story. We’re making progress.

It’s a relief to know that young, queer people have more role models in cartoons than ever before, and that they likely won’t be seeing their first example of a hero like them as late in life as I did. Here are some of the cartoons, aimed at young people, that have advanced queer representation. 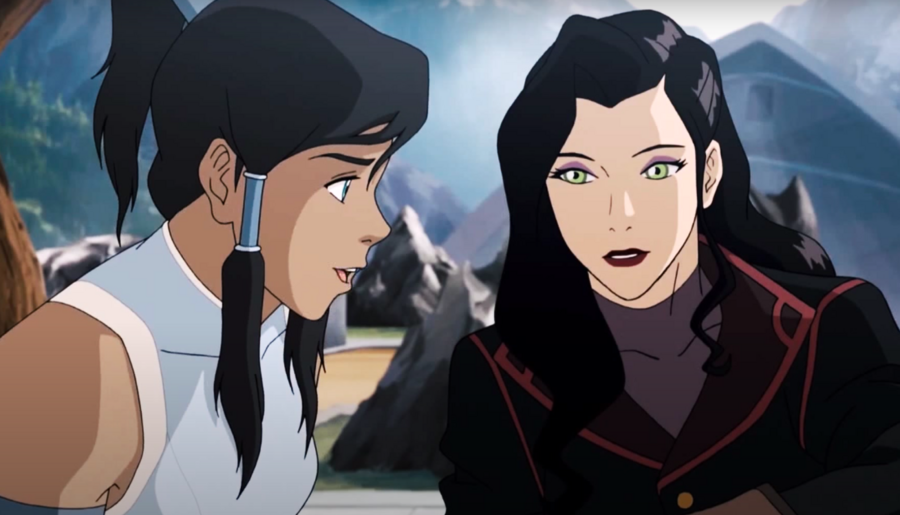 “The Last Stand” changed the game for the Legend of Korra and the broader Avatar: The Last Airbender universe. In the episode, protagonists Korra (Janet Varney) and Asami (Seychelle Gabriel) share an emotional chat, and leave to enter the spirit realm together, hand-in-hand, while gazing into each other’s eyes. These two powerful women who started their relationship by fighting over a mediocre boy, had found and understood one another, and now they were together, just the two of them, a real and confirmed couple. My gay heart jumped. For days after the episode aired, I scoured every online discussion board, looking for evidence their queerness was true as I waited for the creators to confirm that, yes, we had seen two women in love onscreen. It was a romantic ending for Korra and Asami, a canon couple made up of two bisexual women.

I remember crying while reading the letter from creator Bryan Konietzko that confirmed Korrasami. It explained that he and cocreator Mike DiMartino felt the love story was important to fight for. “The more Korra and Asami’s relationship progressed, the more the idea of a romance between them organically blossomed for us,” Konietzko wrote. “However, we still operated under this notion, another ‘unwritten rule,’ that we would not be allowed to depict that in our show. So we alluded to it throughout the second half of the series, working in the idea that their trajectory could be heading towards a romance.” Using the clout and credibility they’d accrued as the creators of Avatar: The Last Airbender, Konietzko and DiMartino used their platform as the creators of Korra to push for representation. ‘‘This particular decision wasn’t only done for us,” Konietzko wrote. “We did it for all our queer friends, family, and colleagues…I’m only sorry it took us so long to have this kind of representation in one of our stories.’’ 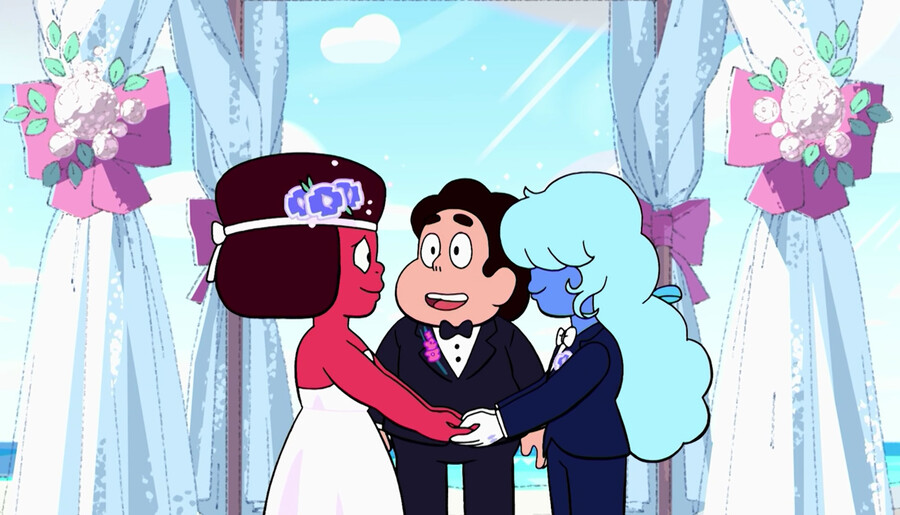 During their wedding, Ruby, left, and Sapphire stand underneath a chuppah as Steven officiates on Steven Universe (Photo credit: YouTube/Steven Universe)

Steven Universe has always featured queer relationships and has a massive queer fanbase; in fact, them called it “the queerest cartoon on television.” In 2018, the series featured a historic proposal and wedding between same-sex characters. Steven Universe’s creator Rebecca Sugar, who was prepared to lose the show to get the wedding onscreen, has been the driving force behind including more queer characters. “If this is going to cost me my show that’s fine because this is a huge injustice and I need to be able to represent myself and my team through this show and anything less would be unfair to my audience,” Sugar, who is nonbinary and bisexual, told Entertainment Weekly in 2018 about the studio calling a meeting with her over the “Reunited” episode. “If they’re queer kids, you’re telling them directly that they don’t belong in a family-friendly world if you exclude them from G-rated content.” If these are the lengths creators have to go to, then how many queer romances have we missed out on because the studio shut down the idea because of their fear and bias? Thankfully, Cartoon Network aired the episode, and Steven Universe continued to capture the hearts of fans with a spinoff series, Steven Universe Future, and a film, both of which thoughtfully examine gender and power. 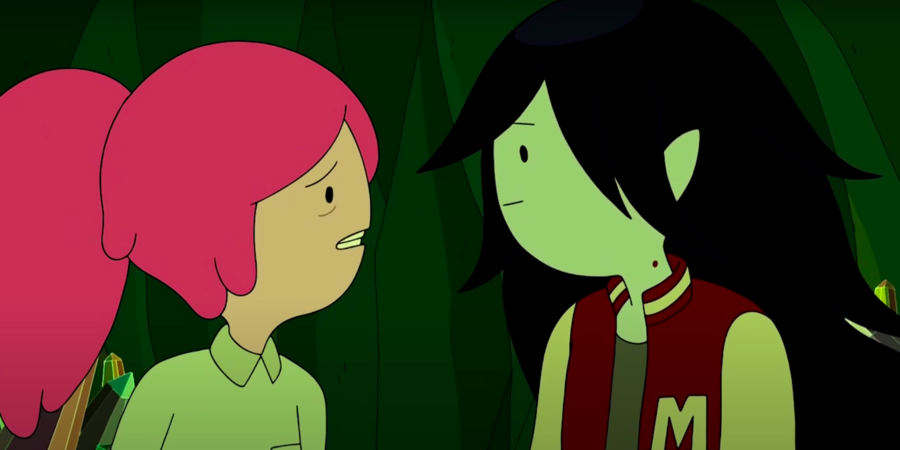 For several seasons, Adventure Time featured signs of a romantic relationship between Princess Bubblegum (Hynden Walch) and Marceline the Vampire Queen (Olivia Olson). Olson confirmed the relationship back in 2014 at a book signing, while also saying she had been told it wouldn’t appear in the show because “in some countries where the show airs, it’s sort of illegal.” That confirmation didn’t carry the same weight as, say, an onscreen kiss does in making it canon for all viewers, but eventually viewers got what they were hoping for. In the 2018 series finale, “Come Along with Me,” viewers who hoped the queer representation they sensed—especially after a near-kiss in the comic Marceline Gone Adrift—was more than queerbaiting, found a true romantic relationship between Bubblegum and Marceline. There was backlash from conservative sites like One Million Moms, but the episode remains a fan favorite. Four years after Korra ended in a meaningful look with a kiss implied (but not allowed on screen by Nickelodeon), Adventure Time was able to feature this historic lesbian kiss between Marceline and Bubblegum on Cartoon Network.

She-Ra and the Princesses of Power 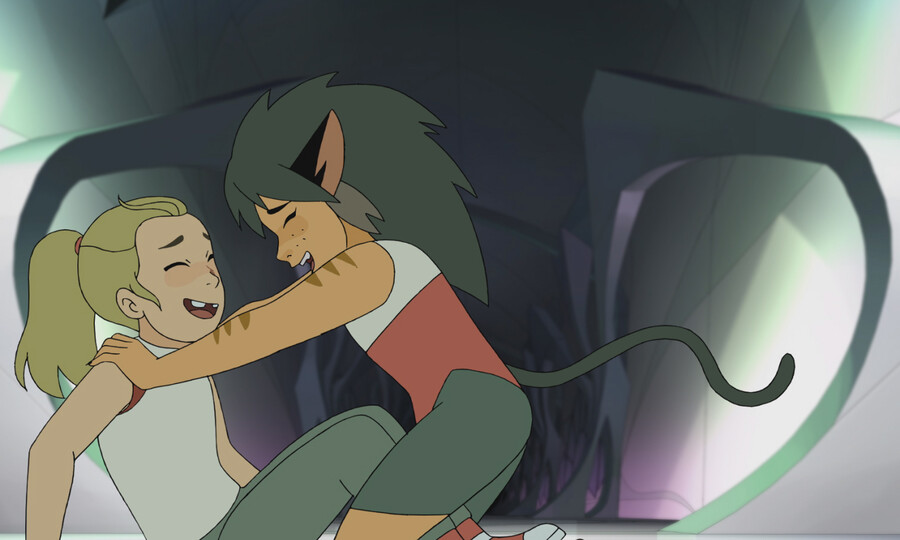 The May 2020 She-Ra finale featured Adora (Aimee Carrero) and Catra (AJ Michalka), one of the central relationships driving the show, confessing their love and finally kissing. The two were raised together as soldiers for the Horde, but parted ways when Adora discovered that the Horde was evil and found a magical sword that transformed her into a powerful princess called She-Ra, leaving Catra feeling abandoned and angry. This drives the conflict of the show, turning Catra into one of its main antagonists, motivated by her desire to bring Adora back to the Horde, while Adora seeks to reconcile her own past beliefs and relationships with her current sense of self and purpose. In the final season, the two work together to defeat a common enemy, Horde Prime (Keston John), and it’s through finally acknowledging the love they have always felt for each other that Adora and Catra are able to save the universe. “Their arc is the arc of the show. It always has been,” Stevenson told the Los Angeles Times after the show’s finale. “ Every season is about this relationship, even when they’re the farthest apart.”

So has this particular taboo of centering same-sex relationships in the narrative finally been broken? Well, yes and no. Stevenson had to be tricky to make it reality. She describes keeping Catradora as a possible endgame under her hat for as long as possible, and seeding hints toward it and the plot arc into the narrative with the hope that, by the time it became clear to viewers, it would be too late for higher-ups to stop it. “I remember early on it had to be so secret,” Stevenson told the Los Angeles Times. “I kept it so close to my chest because I was so terrified of being told that we were never going to be allowed to do it.”

Throughout each of these series, showrunners and writers have had to push hard to ensure queer representation onscreen. Even in 2020, it’s a brave and risky move. In the future, I hope to see even more meaningful representation for marginalized queer people whose narratives are often sidelined even within the LGBTQ community, specifically through developing queer characters of color, trans characters, nonbinary characters, and asexual characters. Perhaps, with a little more pushing, networks will eventually see that they have a duty to satisfy the people watching, not the bottom line or conservative parent groups. It’s clear there’s demand from audiences, and the will is there from creators. Executives just need to find the courage to lift them up or keep out of their way. And trust me: It’s more than worth the fight. 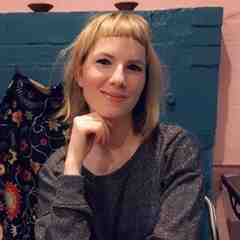 Lena is a union rabble-rouser, currently based in Glasgow, Scotland. She is also a community development practitioner, and community activist, with a background in mental health social work and dementia services. You can find her on Twitter at @Ienadean