Netflix’s “Holidate” is Not Worth Watching | Bitch Media 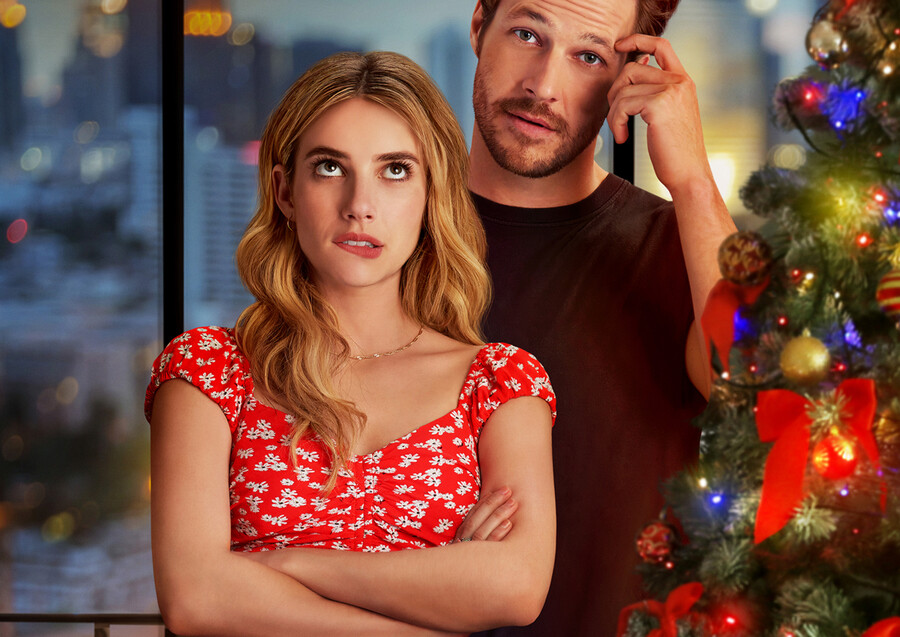 Holidate, Netflix’s latest holiday-themed romantic comedy, is a Hallmark-inspired movie for straight people who think saying words like “tits” makes them edgy. Though it’s marketed as a classic rom-com, it has far less romance and comedy than viewers might expect going in. The relatable premise feels targeted to millennials: Sloane (Emma Roberts) is sick of being single on the holidays because not being partnered evokes too many probing questions from her family members, especially her mother, Elaine (Frances Fisher), who stops at nothing to push her toward love. But Sloane, like any other cynical millennial who hates her boring work-from-home job that involves too many spreadsheets—during which Elaine is always video calling her—hates love. She stopped believing in a happily ever after when her boyfriend dumped her and he ended up falling in love with another woman who’s supermodel beautiful.

Sloane’s now single and happy—or so she says—but her world gets turned upside down when her younger brother proposes to his girlfriend during Christmas dinner. She fumes through the proposal, and to push down her frustration, she goes to the mall to return one of her Christmas gifts. That’s where she meets Jackson (Luke Bracey), an Australian man she becomes immediately enamored with, as they wander through the festively decorated mall together. Their obvious chemistry—Sloane even tells her friends, “He says khakis as car-keys” with hearts in her eyes—gives Sloane an idea: She should make Jackson her “holidate,” so they’ll accompany each other to all holiday family gatherings and ward off the judgment that comes with being single. The film’s premise gave me immediate pause: It’s difficult to believe that someone would be so stressed out by their mom trying to set them on a single date with a very cute doctor that they sign on for a year-long adventure with a stranger that they met at the mall.

After all, Sloane knows next to nothing about Jackson other than that he’s a golfer, which she doesn’t believe, and that he drinks green smoothies, which she finds disgusting (our other reason to feel immediate kinship with Sloane is that she eats poorly, though she’s, of course, very thin). Holiday movies are known for their nonsense, but the reason Hallmark and Lifetime holiday films work is that they know how to suck us in enough to achieve suspension of belief: We’ve watched these formulaic films for so long that we’ve come to accept their contrived plotlines. We don’t question whether it’s plausible for a high-powered business woman to fall in love with the man who helped her when she returned to her hometown to help save her father’s Christmas tree farm. Though the formula is clear, Netflix hasn’t built in the buy in to create a film like Holidate. While 2017’s A Christmas Prince was pretty decent and 2019’s Let It Snow was charming, these films worked because they both had a hook: A Christmas Prince let us imagine our lives as members of a royal family, while Let It Snow intentionally diversified the teen rom-com.

However, neither film succeeded in setting a norm for what Netflix’s holiday line-up intends to do. Holidate, then, feels like an attempt tossed at a wall rather than a game-changer that continues the formula Netflix hopes to originate. Though Holidate follows the typical holiday rom-com format, it’s much more invested in its own crude humor than bringing us into the fantasy of the romance. Sloane and Jackson’s are so unnecessarily vulgar and so frequent that it becomes cringe-worthy. It isn’t funny that Jackson expresses so much joy when he says he can afford to comment on how good Sloane’s tits look in her New Year’s Eve party dress, and that Sloane smilingly comments that it’s nice to not have to worry about being slutshamed by her date because it has no base in reality. Again, much like the parents’ obsession with finding Sloane a boyfriend, I can’t think of an adult couple that can’t comment on each other looking amazing or of a woman who would be okay with dating a man who slut shames her. Are our standards truly so low?

Another awkward event takes place when the film attempts to pull off a joke where we zero in on Sloane and Jackson sitting in her car, and, from where we’re situated, peering in through the back windows, it looks like Sloane is giving Jackson a hand job. But she isn’t, which is funny, supposedly. Again, this joke doesn’t land because we’ve seen zero chemistry between our protagonists. Throwing two hot white people into the same film doesn’t make it a hot film, despite this being an idea that Netflix has relied on time and time again with films like The Kissing Booth (2018) and its subsequent spinoffs, and its multiple attempts to make Noah Centineo its resident teen hottie. Centineo was only swoon-worthy in Too All The Boys I’ve Loved Before, but lost his sparkle in Sierra Burgess is a Loser. Why? Because good writing matters, and the latter had nothing on the former. It’s a lesson that Holidate—and any other holiday films Netflix plans to throw our way—could stand to learn.

Holidate shines brightest when it strips itself of its attempt to take on rom-com norms and instead embraces the messiness of Sloane. On Halloween, after accidentally taking laxatives, Sloane, trapped inside of a corset for a party, is about to shit herself. Jackson takes her home, where chaos ensues. They have to make it up the elevator, to her apartment, and to her bathroom, and Sloane just doesn’t think she’s going to make it. She struggles to hold it in, and Jackson struggles to free her from her corset while she screams and begs him to hurry, until finally, Sloane just barely makes it to the toilet. The contrast between this hilarious moment and what follows shouldn’t work, but it does. We’re treated to Sloane sitting in the tub while Jackson lovingly sprays her off, and the moment is quiet, a stark shift from the previous scene. It shouldn’t feel romantic. He is, after all, helping her bathe after she has explosive diarrhea. But there’s a care to it from Jackson’s completely kind demeanor to the warm light that softens them both, and we see two people, minus forced jokes and unnecessary cursing, who are just kind of falling for each other.

I wish the film had the guts to sit here longer, but, instead, it continues with the unnecessary chaos. Jackson loses a finger! Sloane’s aunt grinds with Sloane’s date at a wedding! Jokes about cancer, over, and over, and over again! The punches come so often that they hold little to no weight and do zero work to raise the stakes by the time we get to the big reveal, which takes us back to the mall and involves Sloane finally admitting her feelings for Jackson—amid, again, cancer jokes. Why is this movie so obsessed with cancer jokes? Holidate feels like Netflix trying to create a formula for holiday films of their own, but it isn’t bold enough to decide one way or another: does it want to abandon its predecessors and create a formula of its own? Or does it want to be another copycat? Because it never makes that decision, the film feels like a mashup of the rare, loving scene that does introduce readers to its own fantasy of holiday romance, and many, many more scenes that will do nothing for people who aren’t impressed by adult human beings saying bad words.