Carrying the TorchBeyoncé Embodies the FUBU Mantra in “Homecoming” 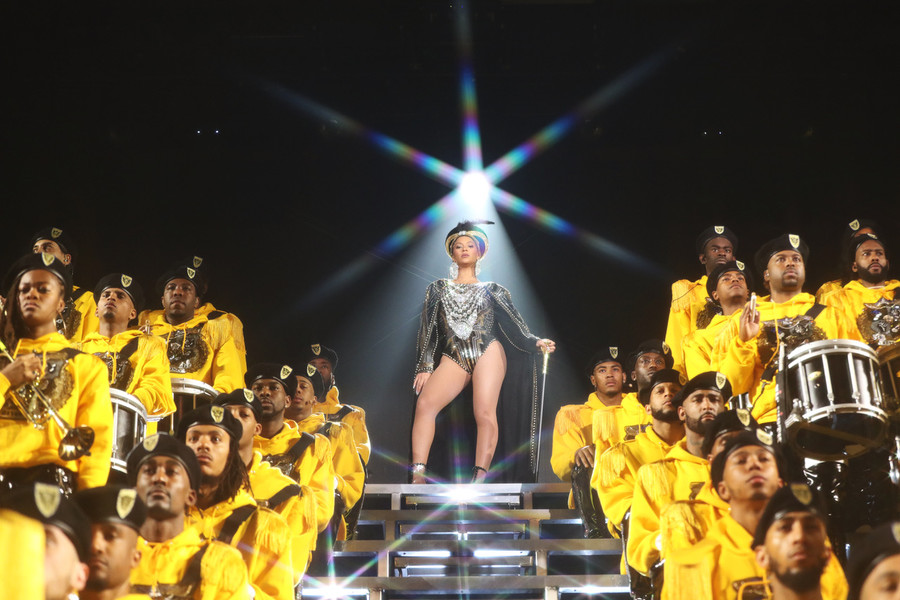 Beyoncé did the damn thing too when she blessed the Coachella Valley Music and Arts Festival’s audience in April 2018 with two electrifying performances of her greatest hits interpreted through uniquely African American rituals. The Coachella production—captured in Homecoming, a new Netflix documentary and an accompanying live album—is at once an example of Beyoncé’s radical artistry and her continuance of something very old and constant: Black women documenting, nurturing, and defending our culture.

From the first rat-tat-tat of a drumline snare to the final strains of her remake of Frankie Beverly and Maze’s 1981 Black cookout classic, “Before I Let Go,” Beyoncé’s headlining performance—Coachella’s first ever for a Black woman—embodied the “for us, by us” mantra that her sister, Solange, sang about on 2016’s A Seat at the Table. “Beychella,” as it was promptly rechristened, showcased the cultural flash and funk of historically Black colleges and universities (HBCU). There was a showstopping marching band, a drum line, a baton twirler, and and a bevy of fine-ass, jumpsuit-clad dancers dubbed “Bugaboos” who recalled a Black fraternity pledge line. An array of Blackness—thick and thin; book smart and street smart; domestic and global; singing, fiddling, high-kicking, crumping Blackness—performed alongside Beyoncé. And within the rowdy celebration, she included a moving rendition of “Lift Every Voice and Sing,” often called the Negro National Anthem.

There’s no question that Beyoncé is exceptional, but she also understands that she’s part of a lineage of great Black artistry. Called to perform in front of a mostly white, well-to-do crowd of 125,000 in the California desert, Queen Bey boldly served up African American cultural deep cuts that mostly Black folks recognize and that the mainstream has yet to commodify or co-opt. “I wanted a Black orchestra. I wanted the steppers. I needed the vocalists. I wanted different characters,” Beyoncé explains in the documentary. “What these young people can do…what their bodies can do and the music they can play…the drum rolls and the haircuts and the bodies…It’s just so much damn swag. It’s just gorgeous. It makes me proud.”

Homecoming captures the joy of the cultural unity that Beyoncé fostered, seen mostly as cameras bypass confused white faces to seek out Black festivalgoers brimming with elated recognition and grateful acknowledgment. She offered no roadmap for the lost and no instructions for the confused. Beyoncé performed for the folks who get it—Black folks. “So many people who are culturally aware and intellectually sound are graduates of historically Black colleges and universities, including my father,” Beyoncé says in the film. “There is something incredibly important about the HBCU experience that must be celebrated and protected…I grew up in Houston, Texas, visiting Prairie View [A&M University], and I always dreamed of going to an HBCU. When I decided to do Coachella…instead of bringing out my flower crown…it was more important for me to bring our culture.”

These performances tapped into a particular Black middle-class experience with the respect and reverence it deserves but rarely receives. Like Beyoncé, I too grew up with these cultural touchstones: My father attended Tennessee State University (TSU) and Fisk University; my brother followed in our daddy’s footsteps; and my parents, brother, and I are all members of Black Greek organizations. Homecoming insists that Black culture matters and is worth preserving and, in particular, makes the case that HBCUs—which are often embattled and underfunded—are worth not only preserving but celebrating. (The artist put her money where her mouth is too; after Coachella, she gave $200,000 in scholarships to students at eight HBCUs.)

That sentiment is perhaps truer now, as naked racism surges during the Trump era, than it has ever been. In a 2018 article titled “Why Historically Black Colleges Are Enjoying a Renaissance,” the Pulitzer Center reported that HBCU enrollment has increased in recent years, noting that, “Many Black students have pivoted to HBCUs recently out of concern that their comfort, safety, and humanity are under siege.” While Black students may already be taking a closer look at HBCUs in hopes of avoiding the racism and marginalization that can be found outside of Black spaces, Beychella and Homecoming might offer those students reasons to choose Black colleges for what they are rather than what they are not.

The Cosby Show and A Different World had a similar effect in the ’80s, but unlike those artifacts of Black entertainment, Homecoming is not sanitized. It does not preference Black respectability. It is hard to imagine, Bill “Pound Cake” Cosby cottoning to all that ass dropping and chanting of “suck on my balls.”

Showcasing HBCU culture on a mainstream stage is revolutionary in a society that undervalues Blackness and often ignores Black scholarship; Beyoncé’s role in putting it there is not. Dr. Melanye Price, author of 2016’s The Race Whisperer: Barack Obama and the Political Uses of Race and endowed professor of political science at Prairie View A&M University, says that Black women have long been the collectors of knowledge in the Black community.

“[We] are the teachers. [We] are the ones who do the day-to-day work of sharing with people what it means to be Black,” she says, evoking the names of legendary journalist and activist Ida B. Wells, who traveled the South collecting information about lynchings; Zora Neale Hurston, who explored the folklore of the African diaspora; Septima Clark, who established “Citizenship Schools” in the Deep South to teach Black cultural pride and literacy; and Rosa Parks, who amassed stories about Black women’s experience with sexual violence. “We unearth the truth about Black people and then share it with our children and others,” she adds.

Black women’s labor as culture bearers frequently goes unheralded even within Black communities. Price notes that Black men have historically been afforded the gravitas to serve as Black intellectuals; Black women have always used other means to get their voices heard. It’s not surprising that Beyoncé’s anthropology leverages music, dance, and song. “[Entertainment] is a realm in which Black women are allowed to be fully voiced,” Price explains. So it is fitting that Homecoming also explores Black womanhood through Beyoncé’s coexistent experience as a business woman, an artist, a wife, and a mother. In a society that can only sympathize with and cherish white womanhood, Black women are often robbed of their vulnerability by racism and sexism—and, for many of us, classism and homophobia as well—that makes fragility dangerous and hardness necessary. Women like Beyoncé are often robbed again by success and fame: What real struggles could a “queen” possibly have?

In a society that can only sympathize with and cherish white womanhood, Black women are often robbed of their vulnerability by racism and sexism—and, for many of us, classism and homophobia as well—that makes fragility dangerous and hardness necessary. Women like Beyoncé are often robbed again by success and fame.

Homecoming offers an answer as Beyoncé opens up about her struggles with maternal wellness and body acceptance. The 36-year-old star explains that while carrying twins Rumi and Sir Carter, she developed pre-eclampsia and high blood pressure. One baby’s heartbeat began to take long pauses, and Beyoncé ultimately had to have an emergency C-section. She emerged with a new baby boy and girl barely 100 days from her scheduled Coachella performance with a body that did not feel like her own. Homecoming lets us bear witness to the perfectionism, hard work, determination, and artistry that made her historic performance possible. We watch as she sweats and struggles through her first post-childbirth rehearsal, and as she chides and cajoles dozens of dancers, background singers, a marching band, and an orchestra toward perfection.

Witnessing Homecoming’s celebration of my culture and my sisters nourished my soul, but a worry itches at me: It is one thing to share Black culture with Black people, but history has shown the consequences of sharing our customs with others. Too many times, white admiration for what is ours has led to appropriation—or worse, destruction. I cringe when I imagine white Cali kids sporting HBCU regalia made cool by Bey while Black colleges continue to beg for their survival. (Perhaps Beyonce anticipated this. She created her own HBCU-, Greek-inspired merchandise, rather than hawking the authentic stuff.) But Price thinks this might be the cost HBCUs have to pay to retain relevance.

“[If I] have to watch YouTube videos of little white kids singing ‘Lift Every Voice and Sing,’ I will take that if [it] means that you’ll also see little Black kids learning ‘Lift Every Voice and Sing’ again,” she says. “As a person who graduated from a historically Black college and now works at one, I think that would be wonderful.” No matter when Black folks leave the house with our hair, our dress, our effortless swag, we run the risk of it being stolen. So it is in America. But Price asserts, “None of that should stop us from presenting ourselves in public as worthy of being celebrated and admired.” On the contrary, the loving presentation of Blackness unfiltered and unexplained for the white gaze, as Beyonce offers in Homecoming, is one definition of freedom.