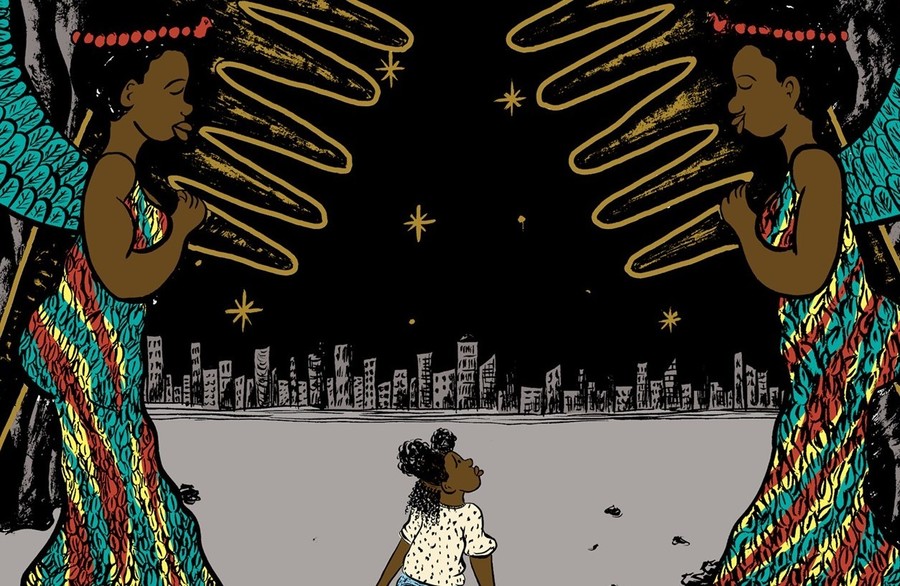 Hair care is a rite of passage for Black women. We go from sitting between the legs of our mothers, aunties, and big sisters as they plait our locks to slumping into a beautician’s chair after waiting hours for her to finish up another client’s hair. We braid our love and history into intricate designs that invite unwelcome commentary from our coworkers and strangers we stroll past on sidewalks. Ebony Flowers, a cartoonist, ethnographer, and 2017 Rona Jaffe Foundation Award recipient, explores how our crowns became a source of both beauty and pain in her recently released graphic novel Hot Comb.

Hot Comb is arriving as Black hair knowledge reaches its peak: There are countless YouTube tutorials about washing and styling different grades of Black hair, video reviews of nearly every hair product and accessory on the market, and a number of blogs, forums, and Twitter threads about Black women’s hair. There are even Black-owned businesses that cater to our hair needs. While conversations about Black women’s hair now seem unending, Flowers still offers a refreshing perspective about our hair as a means of community formation and the space that the ritual provides for us to process difficult life moments. Her self-penned drawings and accompanying dialogue illustrate the complexities of Black women’s relationships with each other and our hair, following our strands through beauty salons and living rooms, on subways, and even to the grave.

Flowers begins the book with the titular “Hot Comb,” a story about her own hair journey, which started when she received her first relaxer (referred to as a “perm” in Black communities) in fifth grade. “I’m tired of people making fun of me and beating me up,” she explains to her mother, who adamantly opposes her getting a perm. Her mother later relents, and Flowers sits in an ammonia haze in the salon in hopes that her new hairstyle will ease the alienation she’s feeling and provide the social capital her natural hair doesn’t afford her. The perm—and Flowers’s new habit of tucking her straightened hair behind her ear—makes her mother say that she’s acting “like some white girl.” It’s a familiar refrain heard by many Black girls who enjoy their first press ‘n’ curl, relaxer, or weave a bit too much in the presence of other Black people. We’re allowed to enjoy our new hair—as long as we don’t forget who we really are.

Flowers’s story reflects the ways Black women conform to alleviate everyday anxieties; it’s also a larger theme that plays out across subsequent stories. “Big Ma” follows the story’s eponymous character choosing to let her drug-addicted daughter rob her instead of calling the police, an action that would further harm and disrupt the family. The story also alludes to the U.S. crack epidemic’s ruinous effects on Black communities and family dynamics. “Fieldwork Follies” describes multiple moments where Flowers permitted others to touch her hair, despite her discomfort, to satisfy their confusion and to ease resulting social tensions that would’ve prevented her from effectively working had she spoken up. Yet, it isn’t just about how our hair presentation permits us to better navigate social spaces. Black women must also face the brutal reality that we cannot control how people perceive us.

Wearing a headwrap for cultural expression or comfort is interpreted differently depending on the situation: It becomes a symbol of foreign nationality like in “The Lady on the Train,” or a curiosity that invites dissection, even when its wearer is simply experiencing the everyday and running errands, rather than actively seeking out viewers. It is also scrutinized against a rubric of traditional, professional attire when worn in the workplace. Substitute the headwrap for an Afro, braids, or locs, and the results are the same.

All Black women haven’t experienced the trauma captured in Hot Comb, but there are still broad strokes that all Black women have either shared in intimate dialogues with our friends and family or experienced through microaggressions from non-Black communities. This is because the novel captures hallmarks of the Black hair experience. Even its title recalls images of little Black girls sitting in kitchens, smelling the familiar scent of singed hair grease. While Hot Comb highlights the relationships Black women and the people we encounter have with our hair, it also comprises incisive analysis of the racism, classism, and sexism that dictates so much of those relationships.

It’s not just about hair, but everything that happens around it, ranging from conversations about colonialism, when girls stop being children, and the oft-misplaced admiration—that borders on fetishization—of our hair’s versatility. This intersection is most clearly exhibited in “The Spaniard” when a bar companion tells Flowers, “I love Black women’s hair. It’s like I have a new girlfriend every week.” He then compliments Flowers’s “good hair” while commenting on his girlfriend’s ability to change her “nappy hair.”

“My Lil Sister Lena” illustrates how trauma expresses itself: Flowers’s sister, Lena, endures incessant microaggressions and racist language from her white softball teammates. They touch and pull her hair, stare at it, and critique it, which culminates in Lena developing trichotillomania. The story adds much-needed commentary on Black mental health as we explore Lena’s obsessive hair-pulling and her inability to vocalize her struggles to her mother. The importance of mental health has recently become a more public conversation in the Black community after many like myself have struggled in private due to cultural expectations about strength.

It’s not just about hair, but everything that happens around it, ranging from conversations about colonialism, when girls stop being children, and the oft-misplaced admiration—that borders on fetishization—of our hair’s versatility.

“My Lil Sister Lena” is arguably the most evocative story in Hot Comb as Flowers focuses on a single hair strand against a stark white background for several panels, which is then interrupted by a finger with the hair wrapped around it and clipped dialogue, moments before the hair is plucked. We feel every twist and pull, every sharp pang that racism renders onto the young Black girl’s body. “My Lil Sister Lena” is the most tangible expression of racism and oppression’s influence on the Black body, mind, and relationships. Readers who claim to be unfamiliar with racism cannot avoid the way this comic slips into their imagination and evokes an emotional reaction that rattles the boundaries of their social privilege.

As we navigate social and cultural systems designed to oppress us, Black women are also processing trauma, which we store inside our bodies—and within our tresses. Motherhood features prominently in Hot Comb by answering questions like, “Where do Black mothers go to cry?” When we are told to be strong pillars in our household, when and where can we feel? Hot Comb shows us that the long-repressed tears and explosive anger of Black mothers is released in cars, on park benches, and in living rooms while in the presence of women enduring the same pain. Black hair care then serves as therapy and self-expression, joy and survival.

Hot Comb’s finer details are lost in stories with exterior settings or ones that have complex background scenery and highly contrasting textures. Jumbled illustrations hinder the narrative pacing as the reader pauses to scrutinize the background for supporting plot information. The storylines combined with the large, handwritten text that dominates scenes and is chopped up over multiple panels are occasionally stilted and the emotional punch is blunted. Yet, the book still encourages Black women to look past the narrative’s flaws and draw on their own historical knowledge or personal hair journeys. Only we can fill in the gaps.

by Princess Gabbara
We cannot discount how enslaved Black women used dress as a form of resistance. 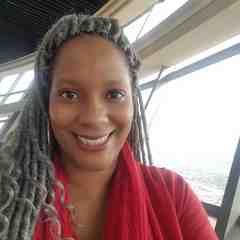