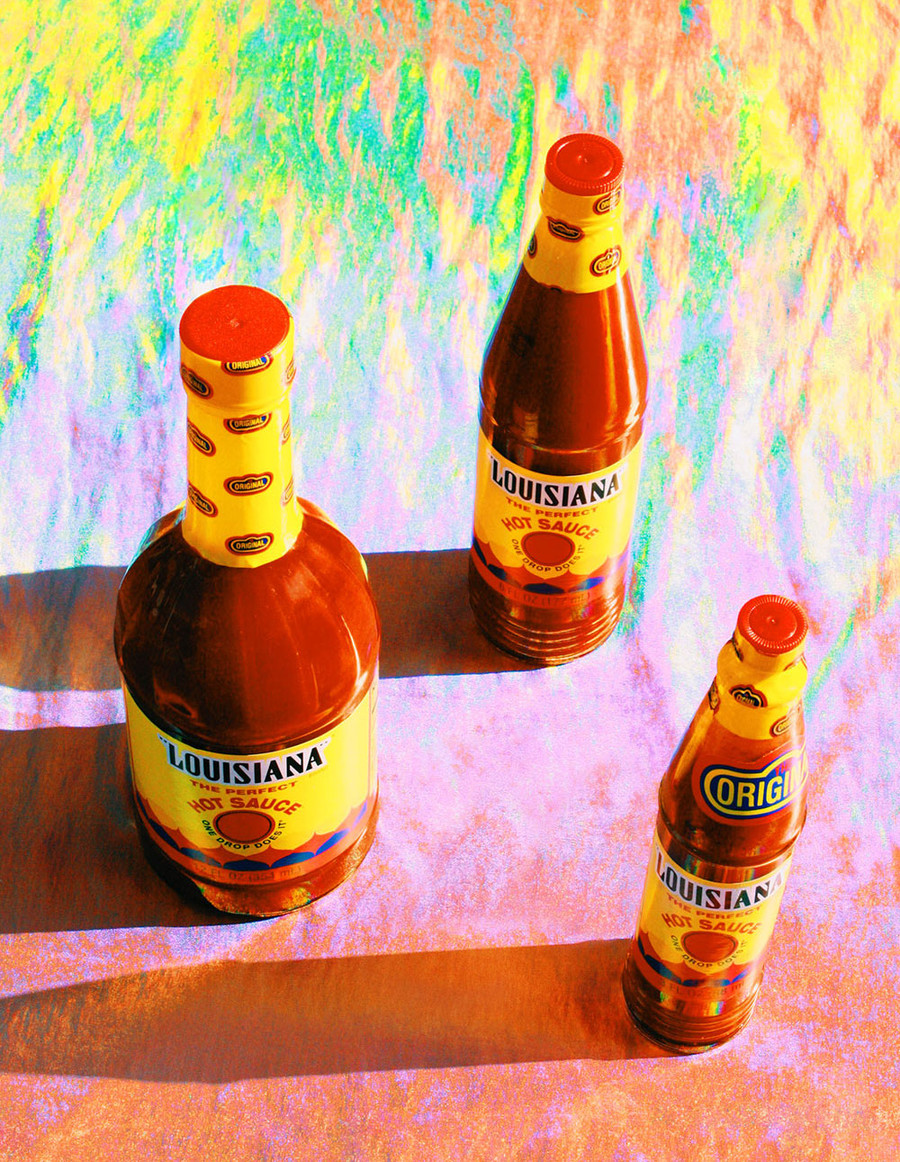 My mom ambled through my door just before midnight. She was visiting from Dallas, Texas, to see my 3-month-old daughter and preach the gospel. At 46 years old, she’d devoted herself full-time to ministry. As she relaxed her small body on the couch, she handed me her takeout box of soul food and asked me to warm it up for her. “Do y’all have any hot sauce?” she asked.

Damn, I didn’t. I knew the real question, though, was whether I had any Original Louisiana Brand Hot Sauce (OLBHS). In Shreveport, Louisiana, where I grew up, my matriarchal family cared more about OLBHS than ketchup and relish—and, for that matter, than about nomadic uncles and estranged fathers. The bottle was gently laid on the table during meals, a steadfast reminder that every dish needs just a bit more heat. At birthday parties, after-church dinners, and funerals, hot sauce brought sharp comfort, much like a slick-tongued family member. Its presence let us know that our idiosyncrasies were considered, which made us feel more cared for. In my family, we joke that our babies wear vials of hot sauce around their necks to ward off evil.

In the past 20 years, hot sauce’s popularity has been kept aflame by culture’s torch. In 1999, Sammy Kershaw paid the ultimate homage to the only sauce that’s “hotter than a fireball” in his song “Louisiana Hot Sauce.” Beyoncé gave a famous shout-out to hot sauce in her 2016 hit “Formation”—“I got hot sauce in my bag/ Swag”—and the red stuff has been celebrated in songs by Young M.A and Travis Scott, who croons “shake it real fast like hot sauce” in his 2016 song “Hot Sauce.” In 2016, when Hillary Clinton mentioned always carrying hot sauce with her, many saw it as a calculated ploy to get the Black vote. According to Quartz, the U.S. hot-sauce market has grown by 150 percent since 2000; much of that growth has to do with changing racial and class demographics. More than half of U.S. households have hot sauce in their kitchens, and Louisiana-style hot sauce is the most popular variety sold to restaurants and food suppliers.

In my family, harming yourself is unholy, unless that harm is eyes watering from tasting hot sauce. My maternal great-grandfather, Louis Hilton White Sr., was a preacher in the Church of God in Christ. His wife, Charles Ann White, was a missionary, as were two of her daughters. My family is religion itself. Preaching and adhering to strict religious principles is our family’s way of making life about something greater than ourselves. We aren’t allowed to pierce our ears or get tattoos. But sizzling bottom lips, tingling tongues, and burning sinuses won’t make St. Peter turn you away at the gates of heaven. As a fifth-generation church girl, I have learned that pain is not only inevitable but normal.

After my great-aunt Jeannie’s sudden death in 2010, I let religion go. She was the holiest, most stand-up woman that I have ever known, and I wondered why God would take one of the people who cared about me the most. I wanted to nothing to do with a religion so cruel. Like my mother, aunt Jeannie was a preacher, and we spent our time together trying to understand each other. She had no idea why I was obsessed with Myspace. I wondered why she woke up every day at 5 a.m. to pray. But in my family, no matter our differences or spiritual shortcomings, we knew we could always sit down over some hot sauce–drenched Southern Classic fried chicken and fries. I know that the sting of a tattoo needle, the quick jab from a piercing gun at Claire’s, and the pain that comes from eating hot Voodoo Curse–flavored wings are the same because I’ve experienced all three. We choose these things to control our pain, to become masters of our own discomfort.

Hot sauce has continuously proven that there is some inkling of similarity between all the women in my family. We are all at least a wee bit hotheaded, especially when it comes to pregnancy. During my first prenatal appointment, my ob-gyn told me to lay off of the spicy foods to avoid heartburn. At the time, I didn’t object. But with every bland meal, I increasingly regretted not pressing my doctor harder. My mother, on the other hand, told me that she’d unregrettably indulged in spicy foods when she was pregnant with my brother. So I took her advice, and had a hot link, some curry, and shrimp with hot sauce during my pregnancy. And hot red beans and rice. And piquant lentils. Nearly a year without spice? C’mon, doc. Get real.

We choose these things to control our pain, to become masters of our own discomfort.

When my mother came to visit three months after I’d given birth, my fiancé and I had only been living in our apartment for two months, and we were still rounding up the essentials. Original Louisiana Brand Hot Sauce should’ve been higher on the list. The taste for hot sauce is a gift that has grown with every generation, and as time has passed, the women in my family have become less afraid of the fire. My mother finally pierced her ears, my great-aunt Rosetta has a rosary tattooed around her ankle, and my younger sister takes care of herself—getting over our fear of being alone and overcompensating by taking care of others. And unlike my austere and pious mother who keeps her missteps to herself, I choose to share my own screwups without the same trepidation because I don’t want pain to silence or shape me. I want to prove that I can stand the heat.

My mother is back in Dallas, and I’m settled into my home with my own little family. We finally bought some Original Louisiana Brand Hot Sauce. It goes on everything: popcorn, french fries, and delicate relationships. The bottle sits in my utterly-too-tiny cabinet, reminding me of aunt Jeannie and my praying mama. One day, I will give my daughter her first taste of hot sauce. Maybe it will hurt, or maybe she’ll love it so much that she’ll wear a vial of it around her neck, like a charm.

Read this Next: Craving the Other