Femme FataleThe Allure of the “House of Gucci” Antiheroine 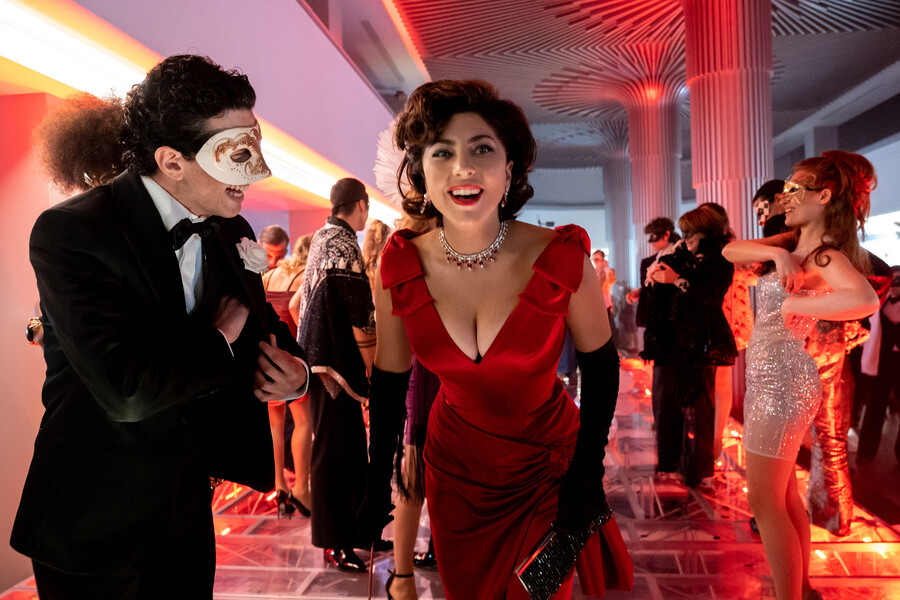 House of Gucci unfolds like a dark fairy tale. In the opening sequence, the camera captures the final moments of an unsuspecting, Gucci-adorned Maurizio Gucci (Adam Driver). His scorned ex-wife Patrizia Reggiani (Lady Gaga) narrates, instantly casting herself as both omniscient outsider and victim. These first few minutes of the narrative establish a clear throughline: This story is not about the downfall of magnificent men, it’s about the tragedy of a woman who flew too close to the sun. Ridley Scott’s latest film, based on Sara Gay Forden’s 2011 true-crime book The House of Gucci: A Sensational Story of Murder, Madness, Glamour, and Greed, depicts the Gucci family as a male-dominated dynasty and Patrizia as a mad woman punished for her inability to accept her lowly station. For Scott, the worst of Patrizia’s sins are not pinned to her successful plot to murder her ex-husband—it’s her wasted potential and her uncontrollable, cutthroat ambition.

Like the femme fatale archetype of film noir, Patrizia is driven by her thirst for access, power, and wealth, which provokes her insecurities. When she first appears on screen, Patrizia is working as an office manager for her dad’s modest trucking business. Soon thereafter, she receives a call from an unidentified male who asks her out on a date. Cut to Patrizia and her suitor at a glamorous costume party. A red satin dress with a plunging neckline hugs and flatters every curve, paired with black elbow-length gloves and an elegant mask. She is vibrant, vivacious, and uninhibited. When she laughs, she throws her head back. When she dances, she gives her entire body to the beat. Patrizia and Maurizio have a meet-cute at the bar. She initially mistakes him for a bartender because he’s dressed in a black tuxedo. Maurizio is endearingly awkward and slightly dorky, enchanted by Patrizia’s boldness. She, on the other hand, is noticeably impressed when she learns his last name. The doomed couple hit the dance floor to Donna Summer’s “Bad Girls,” a song choice that emphasizes Patrizia’s underlying motives.

In an interview with Elle, House of Gucci’s costume designer Janty Yates said that director Ridley Scott shortened the length of the original red dress, telling her: “I want to see legs.” Those familiar with classic film noir can’t help but think of the introductory shot of Lana Turner as Cora Smith in 1946’s The Postman Always Rings Twice. In both films, sensuality defines the femme fatale as she performs hyperfemininity at the expense of her male admirer. The femme fatale knows that under the banner of patriarchy, sex is her only viable source of power. Sometime after the party, Patrizia stakes out Maurizio in hopes of “accidentally” bumping into him. She follows him into a bookstore and then, when they are back outside, she forcefully persuades Maurizio to ask her out. In perhaps an homage to Elizabeth Taylor’s turn as Gloria Wandrous in BUtterfield 8 (1960)—there’s a mention of Taylor as Patrizia’s celebrity doppelgänger in the film—Patrizia scrawls her phone number in red lipstick on the windshield of his Vespa. These early character choices play into Patrizia’s media-crowned image of a “Black Widow.”

House of Gucci does not deal in moral absolutes, but the narrative seems to find ways to rationalize the series of actions that lead to Maurizio’s death. Although Patrizia exhibits some of the classic femme fatale traits, she’s not solely motivated by greed. Always reminded of her working-class background, Patrizia is seduced by the promised grandiosity of Gucci as a social and cultural institution. For Patrizia, Gucci is akin to old-world royalty. On the other hand, Maurizio, who is a full-time law student and lives at his father Rodolfo’s (Jeremy Irons) house, shuns fame and obligation to the family brand. When Rodolfo threatens to disinherit his son if he marries Patrizia, Maurizio isn’t fazed. He shows up on Patrizia’s front steps in the middle of the night, bags in hand, and tells her parents about his destitute financial status and his intention to marry their daughter. He gets a job at Patrizia’s father’s company and settles into the life of a blue-collar worker. Patrizia is the opportunist of the couple, jumping at the chance to get into the family’s good graces and help Maurizio reclaim his privileges. When she becomes pregnant with their daughter Alessandra, Patrizia uses their child as her Trojan horse in her strategic manipulation.

She first becomes friendly with Maurizio’s uncle Aldo (Al Pacino), who owns major shares of the company. When Patrizia discovers a booming knock-off business on Canal Street in Manhattan, she tries convincing Aldo to stop enabling the sales of fake Gucci so that the brand could return to its exclusive status. After Rodolfo dies without editing Maurizio into his will, Patrizia enlists Machiavellian tactics to gain total control. She eventually convinces Aldo’s incompetent, aspiring designer son Paolo (Jared Leto) to give her proof about his father’s U.S. tax evasion to submit to the IRS, which lands Aldo in prison. In exchange, Paolo will be able to design his own line under Gucci. However, Patrizia double crosses Paolo, too, later telling the Italian police that he doesn’t have permission to use the Gucci logo. By the end of the marriage, Maurizio’s poor business-management skills have nearly torched the company; his family relationships are in shambles; and the Gucci family has been kicked out of the very fashion behemoth they’ve created.

Scott’s version of Patrizia leans into the theory that she was an underappreciated genius who wasn’t taken seriously by any of the Gucci men. Speaking of a particularly heated, animalistic sex scene between Patrizia and Maurizio during the early days of their marriage, Adam Driver told Entertainment Weekly, “[Patrizia] very much uses sex as a tool, and I feel like it kind of physically embodies what’s going on between them.” The real-life Patrizia, who was imprisoned for hiring a hitman to kill her husband in 1997, still believes she’s entitled to the Gucci throne. In a 2016 interview with the Guardian, she discussed the explosive end of her marriage, including selling Gucci to Investcorp in 1993: “Losing the family business. It was stupid. It was a failure. I was filled with rage, but there was nothing I could do…He shouldn’t have done that to me.”

House of Gucci portrays Patrizia’s rage as the logical consequence of oppressed female desire. Maurizio is weak and easily swayed by his wife’s influence; Patrizia becomes a convenient scapegoat for all of the problems that contributed to Gucci’s implosion. When the Italian police raid the family’s home and try to arrest Maurizio for forging his father’s signature on his will (which was actually Patrizia’s doing), he sneaks out to Switzerland with the help of a servant and leaves Patrizia to deal with the chaos. After an argument, Maurizio eventually starts an affair with Paola Franchi—pushing Patrizia into a full-on Fatal Attraction phase in her quest to win back her husband. She shows up outside his house, begging for reconciliation. Later, when attending Alessandra’s soccer game, Maurizio asks for a divorce through the family’s trusted advisor Domenico De Sole (Jack Huston), which makes her even more enraged. At a fashion show headlined by newly appointed Gucci designer Tom Ford (Reeve Carney), Patrizia lurks in the shadows, watching her husband with an unsettling concentration. Not long after she orders the fatal shooting of Maurizio, Patrizia visits Paola, who moved in with her ex-husband. After giving Paola a teary-eyed hug, she kicks her out of the apartment so she can move in with Alessandra. Ultimately, Patrizia believes her revenge is justified. Maurizio not only broke the sacred sacraments of matrimony, he robbed Patrizia of something much more important and priceless: her title as the “queen of Gucci.”

This story is not about the downfall of magnificent men, it’s about the tragedy of a woman who flew too close to the sun.

The final scenes of House of Gucci reinforce Patrizia’s role as a femme fatale. We briefly see Patrizia on trial for conspiring to murder her husband, alongside her friend and on-call psychic Giuseppina “Pina” Auriemma (Salma Hayek), who solicited the two gunmen. Her criminal cohorts all stand, but Patrizia remains seated, ignoring the commands of the judge to rise. She’s unrepentant, seemingly annoyed that her presence in court was even required. The real Patrizia was sentenced to 29 years in prison. In 2000, her sentence was reduced to 26 years. Eleven years later, she was eligible for parole on the condition of a work-release program. Patrizia declined this deal, reportedly telling her lawyer, “I’ve never worked in my life and I don’t intend to start now.” In 2013, she was again offered work release, which she accepted.

In House of Gucci, Ridley Scott’s vision of Patrizia gets this attitude right, and adds depth to the widely criticized former Lady Gucci, casting her as a casualty of sexism and marital betrayal. She fought for creative independence despite the fashion house’s patriarchy, and Scott’s film offers an origin story for the vilified woman who sought to restore the brand’s integrity. After her official release, the real-life Patrizia told Italian newspaper La Repubblica: “They need me…I still feel like a Gucci—in fact, the most Gucci of them all.” 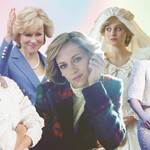 by Sohel Sarkar
The abiding interest is the result of a sustained mythmaking organized around the figure of Diana, the most visible face of the British royal family even in her death.