How Carnival Became a Global Festival 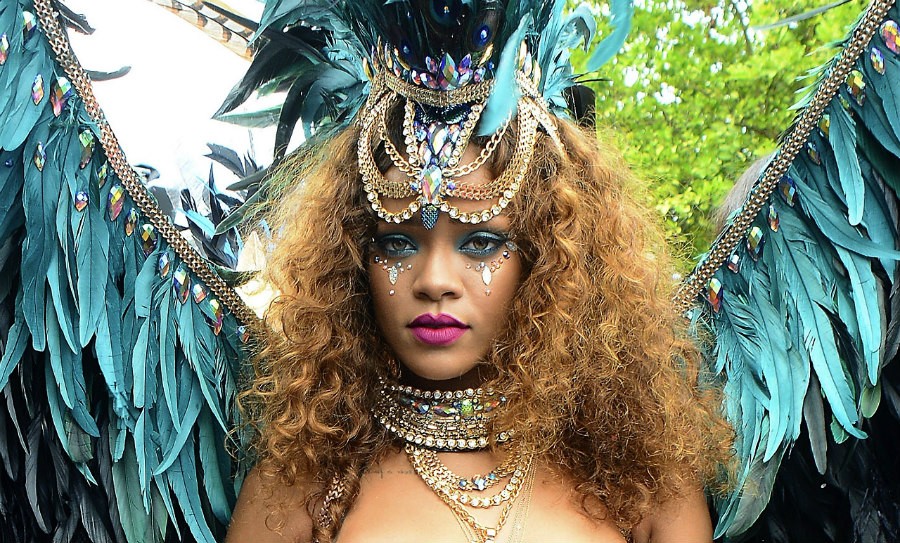 The bass supports the rhythm in our hips as we dance in our costumes. Our jewelry glistens in the sun as our bodies move in familiar, but seemingly intrinsic ways. For a short period of time, we channel inherited methods of celebration, chippin’ down de road as if our lives depend on it; neither increasing rain or sweltering heat deters whining waistlines. This is Carnival, a contemporary iteration of a practice that has transformed overtime, but is rooted in the practices of our ancestors.

Beyond the glamour of the regalia, Carnival is deeply liberating and, for some, spiritual. Within the Caribbean, these celebrations differ in name and origin—Trinidad’s Carnival, Barbados’ Crop Over, Bahamas’ Junkanoo, Grenada’s Spicemas, to name a few—but their histories are often steeped in how slaves of African descent used dance, performance and pageantry to celebrate the end of agricultural season or mock their slave owners. Centuries later, diasporic versions of Carnival, specifically that of Trinidad’s, produced by immigrants and/or first-generation adults, began to pop up globally, most notably London’s Notting Hill Carnival, Toronto’s Caribbean Carnival (commonly referred to as Caribana) and New York City’s Labor Day Parade.

As scholar Esiaba Irobi wrote, “Carnival, as we can see, is a bridge, a continuum, a collective performative aesthetic that manifests both an African and African diasporic need and facility for self-redefinition.” It’s more than an eloquent display of culture. Carnival is a Caribbean necessity. 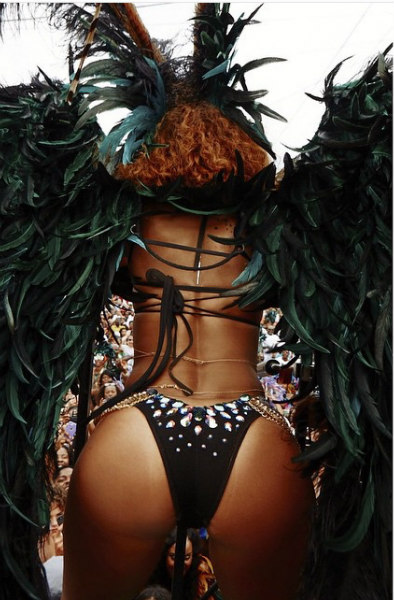 Though Caribbean Carnivals have existed for centuries, visibility has increased within the past few years. Celebrities like Rihanna, who plays mas bi-annually with her brother’s Barbados-based band Aura, and most recently, John Boyega who caught some (unsolicited) feedback from white feminists for catching a whine during London’s Carnival, have contributed to it being so much in the public’s eye. In turn, they’ve exposed all the doings of Carnival, allowing people to see Caribbean culture in literal living color. But it also makes Carnival susceptible to fiercely ill-informed commentary—specifically toward Afro- and Indo-Caribbean women who play mas—and the oversexualization of a cultural product with emancipatory beginnings.

Of course the visual politics of parades have changed drastically from their original form, leading to the accusation that today’s parades have strayed far from their roots. For example, mas camps are trading in the presence of traditional practices and characters, like Grenada’s Shortknee or Trinidad’s Pierrot Grenade, for the contemporary glamourous costumes of pretty/fancy mas. Though the presence of both are important and have always been part of Carnival’s history, the saturation of pretty/fancy mas lies in its economic benefits. Quite simply put, it’s sexy. The entry point for many non-Caribbean Carnival attendees are the women adorned in their Carnival cultural garb, garnering the attention of women who wish to jump and men who wish to jump behind.

Some have suggested that the meaning and history of Carnival are no longer the reasons for why people want to play mas. However, as Irobi says, “participants of Carnival literally, performatively and philosophically, transcend themselves. They enter into a realm of imaginative and experiential possibilities often denied them by their everyday social, economic, political, and religious reality.” So whether it’s freeing yourself from your 9 to 5 job or jumping as an act of resistance, the essence is still there. 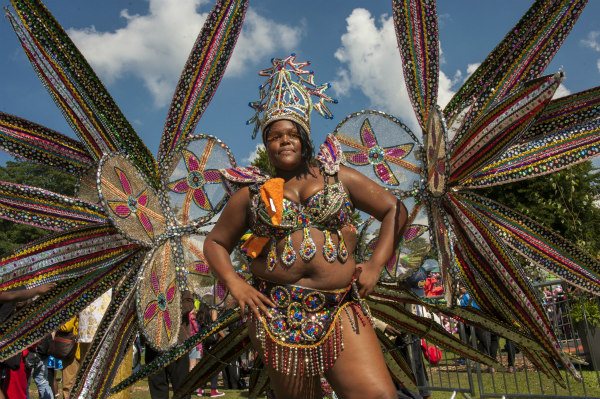 Some people have also suggested that Carnivals outside of the Caribbean are unable to capture its true authenticity. While it is important to acknowledge that the Carnivals within the Caribbean have a history tied to the land and experiences inflicted on its people, diasporic carnivals offer an opportunity to honor those experiences. Even when trying to express Caribbean culture in new geographies, diasporic carnivals carry a particular baggage like frequent violence and gentrification. The history of Toronto’s Caribana exemplifies this: A host of issues have riddled the event’s operations—inadequate financial transparency, the infamous fence height issue, frequent corporate management changes, and the the lawsuit about who can legally use the name Caribana are only a few of many examples of its corporatization.

Yet, people of the diaspora recreate Carnival as a nod to the richness of the culture, the community it cultivates, and its overall infectious nature. The allure is so strong that Japan hosted its own Carnival titled the Japan Soca Tour. Soca artists like Machel Montano have even flocked overseas to perform for a sizably large (and growing) fanbase because there’s a market there to support them. According to the tour’s organizers, it gives attendees the opportunity to have a “cultural experience of Japan, with a touch of soca along the way.” Pause, sis—co-opting carnival will never be okay. It’s performative, culturally insensitive and if there’s a true desire to engage with Caribbean culture, that money would be better spent toward attending a carnival in the Caribbean.

Furthermore, their version of Carnival acts as a gateway into other events and landmarks that are oriented toward Japanese culture, and provide little opportunity for people to learn about Caribbean Carnival’s heritage. Unlike diasporic carnivals, the people organizing and participating have no ties to the space outside of enjoying the culture and music, which literally erases its true meaning. 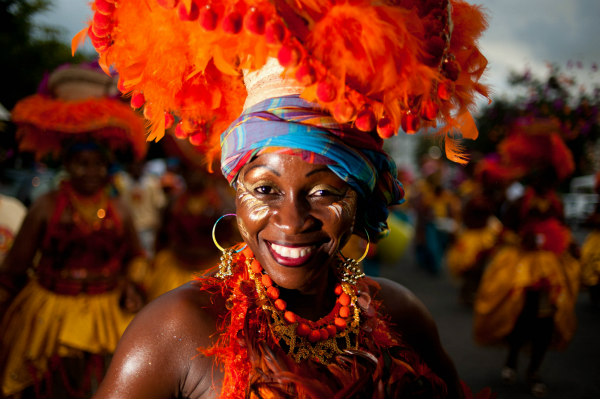 Cultural products made by Caribbean people for Caribbean people are often appropriated for public consumption. As a result, post-colonial Caribbean economies use Carnival to encourage their tourism industries. Such is the case for Barbados whose Crop Over had to be terminated in the 1940s due to a decline in the sugar industry and later revived in 1974 as it was seen as a huge boost to the economy. Given the beauty that occupies the space, I can see why Carnival is so attractive: The sound of soca is inviting, the diversity within

Caribbean culture is impossible to ignore and, most importantly, it’s a size inclusive event. Men and women alike play mas, however, Rukshun said it best when he sang “Carnival is Woman.”

Carnival is truly a body-positive environment. While some bands often forego plus size or dark-skinned models for ones that are slimmer, lighter in complexion, white or racially ambiguous, women still prepare themselves year after year to chip down the road full of confidence. When you’re proudly wearing your section’s costumes, come for a good time (and likely sacrificed a paycheck or two), and know what it means to take part in the parade, insecurities become a fleeting worry. Bands like Danza and Born 2 Be Wild have placed plus size women on their runways and ensured their costumes truly cater to larger sizes fit and comfort.

Additionally, Afro-Caribbean women  have created online communities, like EveryBODY Play Ah Mas and Curvy Carnival International, to ensure both first-time and veteran masqueraders know the importance of representation and there has even been campaigns like #NotAskingForIt who actively work towards ridding the idea of slut shaming carnival attire and the women who play mas.

Time and distance separates the Carnival of the present and the Carnival of the past. In the off season, Carnival tabanca finds a way of creeping into your thoughts leaving you with a feeling of longing and nostalgia. In a sea of colors, costumes, and characters, one thing is for sure: When those road anthems seep into your eardrums and the rhythm sneaks its way into your waistline, when the drinks and adrenaline have taken ownership of your being, when your feathers, jewelry and friends partner in creating a lifetime of treasured memories, know that you’re part of a legacy created by the Caribbean’s African ancestors that, in part, attempts to replicate how they came to terms with their then-lived conditions.

This is more than just a cultural phenomenon. This is Carnival. 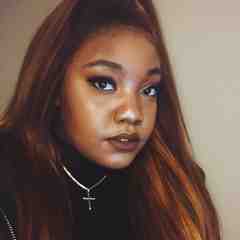 Sharine Taylor is an Afro-Jamaican, Toronto-based writer and the founder of BASHY Magazine. You can follow her on Twitter.