Author Sarah McCarry On Writing Honest YA Books That Include Sex 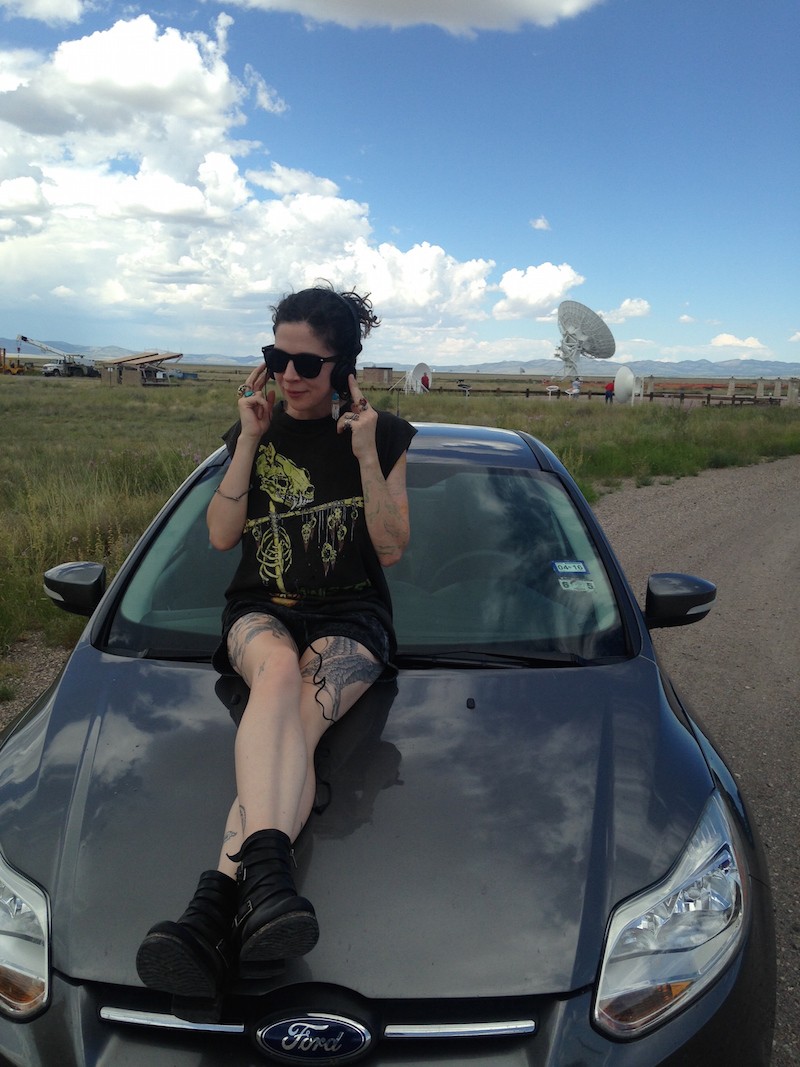 Sarah McCarry at the Very Large Array in New Mexico in September 2015. Photo by Justin Messina.

Sarah McCarry is the adult equivalent of that punk girl who I always wanted to be in high school. You know, the one with layers of fascinating clothes, a defiant haircut, and an assortment of jewelry that winks with a certain air of mysteriousness. You’d expect her to be aloof, but she’s just the opposite—her smiles are genuine and she’s unapologetically enthusiastic about passions like astronomy (she’s a graduate of the Launch Pad Astronomy Workshop) and fiction (she edits the chapbook series Guillotine).

Born in Seattle and now based in Brooklyn, McCarry inhabits the early roots of the grunge scene (a theme that recurs in her work), but she thrives in the climate of her new home as well. In addition to her young adult fiction trilogy—All Our Pretty Songs, Dirty Wings, and About A Girl— she maintains a blog filled with thoughtful, probing entries on the world, publishing, culture, and much more.

Her work has been shortlisted for both the Tiptree and Norton Awards. Now, she’s up for a Lambda Award for her 2015 YA novel, About A Girl, a coming-of-age story about a queer teen figuring out who she wants to be in the world. Part of the reason About A Girl has resonated with readers is that the book is full of diverse characters: the main character, Tally, is described as having brown skin, her family includes an adoptive mom who is bisexual, and her best friend is trans. I was super excited that McCarry agreed to sit down for a little conversation with me about what she’s up to at the moment, and where she’s going next. 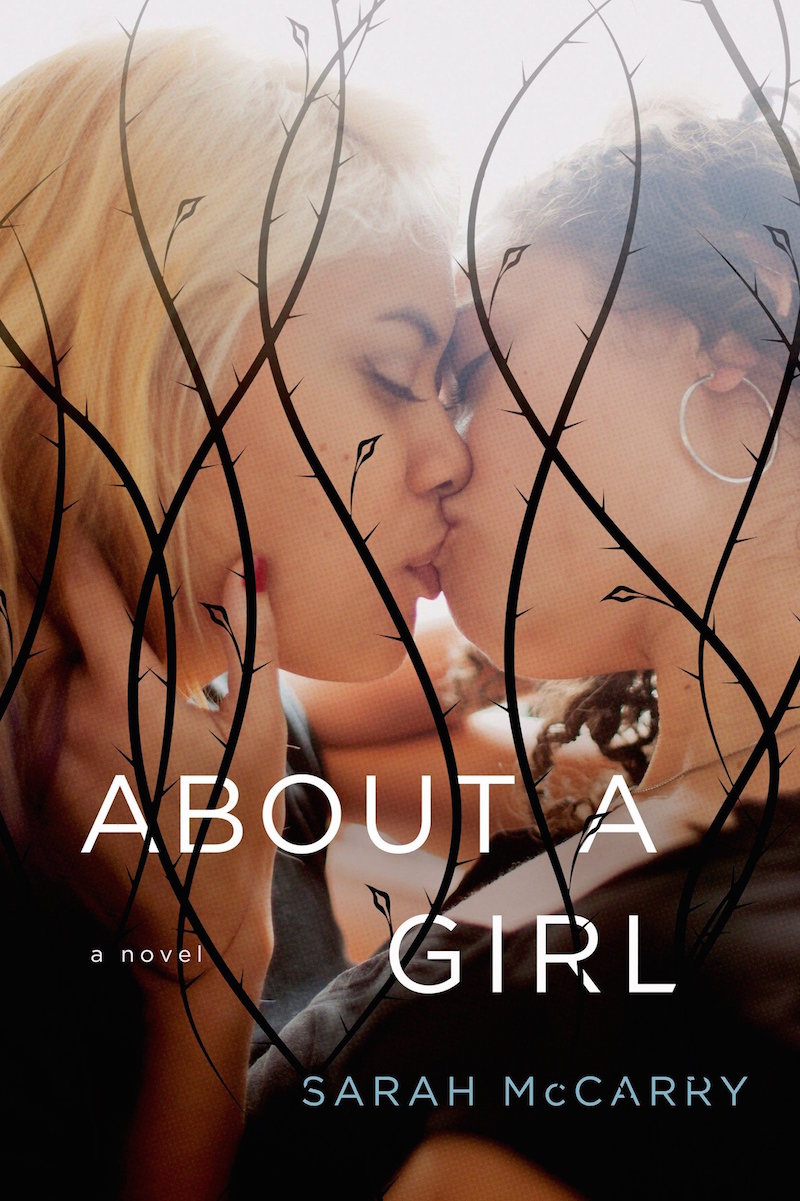 s.e. smith: You write YA books with sex in them. What kinds of responses do you get to the sex scenes in your books?

Sarah McCarry: I write books with a lot of irresponsible sex in them, plus some fairly explicit queer sex, it’s true. You know, a moral panic of some kind would make this question more exciting, but honestly I haven’t found that anyone cares much, or if they do, I don’t know about it. I was briefly interviewed for the NY Daily News about the depraved prevalence of licentious threesomes in young adult literature, although it would be something of a stretch to describe my books as focused on threesomes. But you know, I grew up reading Flowers in the Attic and Anne Rice’s erotica, so my books feel pretty tame in comparison.

The cover of About a Girl features two girls kissing. How do you feel about the cover and how do you feel now being nominated for a Lambda?

About A Girl is, as far as I know, the first commercially published YA novel with two girls kissing on the cover. The response was amazing—people were so excited about it. Something many people don’t realize is that for the most part, authors have very little control over their book covers, and most book covers use stock imagery, which is—surprise—a lot of pictures of white people, which had been an issue with the covers of the previous two books.

So when we got to About A Girl, I was like, “Okay, I want a photoshoot, I want the photographer to be Sandy Honig, I want the models to be my friends Lola and Kimmie, and I want them to be kissing.” And incredibly enough, they said yes. Let that be a lesson to you on the value of insisting on what you want. The designer came along to the photo shoot, which was just Lola and Kimmie making out in Sandy’s apartment while Sandy took pictures and everybody put on eyeliner and ate donuts. I think [the designer] was like, “What did I just get myself into?” But she was a total trooper. It was a very punk moment for publishing, which is not by and large a very punk industry.

Why do you think it is that when queerness and gender variance are represented in YA and middle-grade books, the characters tend to be gay teens, with less representation of bisexuals and lesbians?

I believe the answer you are looking for here is Institutional Sexism! The industry has a strong tendency to value boys’ stories—and men’s stories—over stories about girls and women. Awards in general are more likely to go to books about boys (even if they’re written by women). There are stories about queer girls for sure, but publishers are still putting the bulk of their marketing money and weight behind stories that focus on boys.

There’s a bit of a burden for YA and middle-grade writers to educate their readers about sex, about social issues, etcetera. Can you talk about that a bit?

If your work is published as YA—which is another thing a lot of writers don’t have any control over—you’re being published within this bizarre set of cultural expectations that nobody puts on books published as adult literature—that books need to have some kind of redemptive message, or lesson, or their characters should model good decisions for their readers, or only have consent-negotiated protected sex within a loving and supportive long-term relationship, or whatever. Nobody’s like, “I’m really concerned middle-aged white men are going to read Jonathan Franzen and think it’s okay to have extramarital affairs with a caricature of a woman of color randomly inserted into the story for narrative convenience.”

But adults—always adults, never actual teenagers—will express all kinds of weird anxieties about teenage girls’ sexuality and decision-making and autonomy and selfhood through their approach to YA lit. I absolutely, absolutely think that it’s important to discuss things like problematic representation (of race, of class, of sexuality, of able-bodiedness, of gender) within any form of narrative, but for me that’s a craft issue. Racist writing is just bad writing. Same with any other lazy trope or stereotype. But if you’re relying on YA novels to teach your kids sex ed, you maybe want to rethink your parenting strategy. My job is to tell a story, not teach a lesson.

Obviously, feminism and social justice are huge in your books, though not in an educational way. Tell me about this, friend.

I don’t know how it happened! It’s so embarrassing! Every day I wake up and think, “Sarah, today we’re going to write a nice boys’ story about boys doing boys’ things and make ourselves a wad of money,” and all this weird goth stuff about girls getting in trouble comes out instead. It’s a real problem.

Obviously sexuality is a thing that many teens explore—how do you balance the desire to depict that authentically with the limitations placed on YA? Are you ever concerned about being too explicit or getting shunted to the corner?

So many of those limitations depend on your publisher and your editor; it’s a weird industry. My editor, Sara Goodman, was fantastic, and the only limits she put on the books were things that didn’t make sense for the characters or the story. I know other writers who’ve had very different experiences, so I was incredibly lucky to be able to work with her.

The language you use in your books is really distinctive, taking on a highly literary tone, which feels unusual for YA. Do you feel like people claim literary YA “doesn't sell” and that YA in general can't be literary?

I think that for a lot of writers, YA is just how you get published when you’re writing difficult-to-categorize books primarily about teenage girls. I can think of a lot of other writers—Stephanie Kuehn, Erica Lorraine Scheidt, Nova Ren Suma, Cristina Moracho, Malinda Lo, Kate Scelsa, just off the top of my head—who are writing very, very literary books that definitely don’t fall under what people usually think of when they think of YA.

Highly commercial YA tends to mirror highly commercial adult fiction in that it’s often very plot-driven and fast-paced, but YA as a whole is such a huge umbrella that I don’t think anybody can make any successful general critical statements about it at all. My books would probably sell better if they had plots, but we work with what we’ve got.

Mental illness is really common in the publishing industry, and I know you've talked a great deal about “working while crazy” and the different strategies people use to balance their mental health with their work. Can you talk a bit about what that experience is like for you, and what it's like to be openly discussing mental illness in a world that would really prefer not to look at it?

Well, happily, I do think that’s changing—a lot of writers are talking more openly about living with mental illness and I think the cultural conversation is much more open now to that kind of dialogue. I think there’s still that old, lethal fairytale percolating through pop culture and among other writers and artists I know, that treating your mental illness is tantamount to destroying your creativity, which is such bullshit, and which literally kills people, and which almost killed me. I’m still the same person I was before I started taking medication for my illness; I’m just actually functional a lot more of the time, and I get a lot more done.

I did a series of interviews on my blog awhile back with other writers living and working with mental illness and the response to it was overwhelming. I still get emails about it two years later. It’s so important to talk about mental health, especially since good treatment is so hard to access.

Read this next: Fed Up With a Lack of Diverse Children's Books, Queer Parents Write Their Own
Read this next: Librarians Choose the Top 10 Books of the Year for Young Readers