How “Fargo” Captures the Sad Realities of Toxic Masculinity 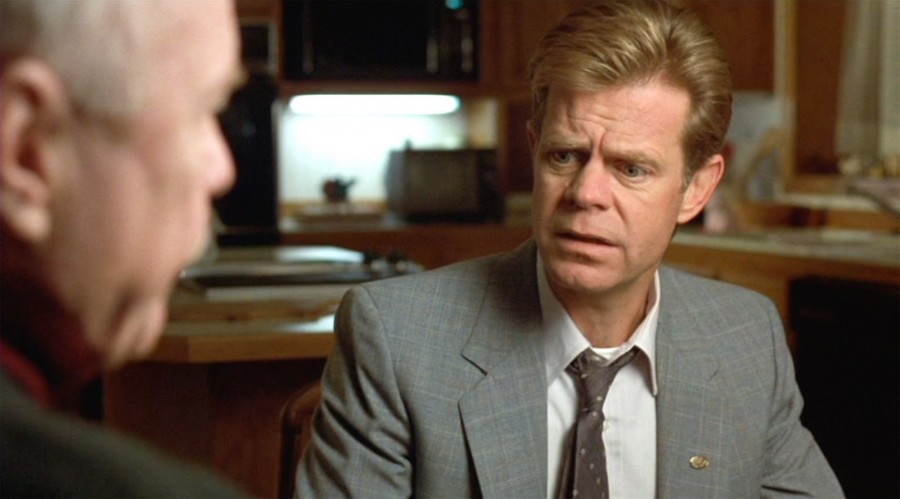 My favorite scene in the film Fargo, which turned 20 years old this March, comes near the very end of the movie. Fans who have known and loved Fargo for the last two decades understand that picking a favorite scene is about as difficult as choosing from the deliciously Midwestern buffet that our heroine Marge Gunderson (Frances McDormand) lingers over as she ponders the murder mystery at the movie’s core. But I always choose the second-to-last scene of Fargo as the one that demonstrates the movie’s greatness.

In it, Marge drives down a frigid highway in her cruiser, with Gaear Grimsrud (Peter Stormare), the career criminal she has just arrested, sitting silently in the back. She has witnessed the carnage he is responsible for and knows he has taken at least five lives in the last few days. If Fargo were a standard-issue police procedural, we would be treated to a scene of a troubled, alpha-male detective berating a perp, verbally and perhaps physically abusing a man who has, in the logic of the movies, proven himself to be inhuman. In typical cop stories, the troubled detective—the man who, as Raymond Chandler put it, “is not himself mean” but must go “down these mean streets,” even if they’re only the mean streets of small-town Minnesota—has to lecture the criminal to reassure himself that his own sometimes-violent masculinity does not stem from the same logic the “bad guy” operates from, that his way of life has not been sullied, and that he could never do what this man did.

But Marge Gunderson does not have this need. Talking to Grimsrud, she sounds not angry, but mystified. She is trying to understand.

“So that was Mrs. Lundegaard on the floor in there,” she says. “And I guess that was your accomplice in the wood chipper. And those three people in Brainerd. And for what?” she asks. “For a little bit of money.” 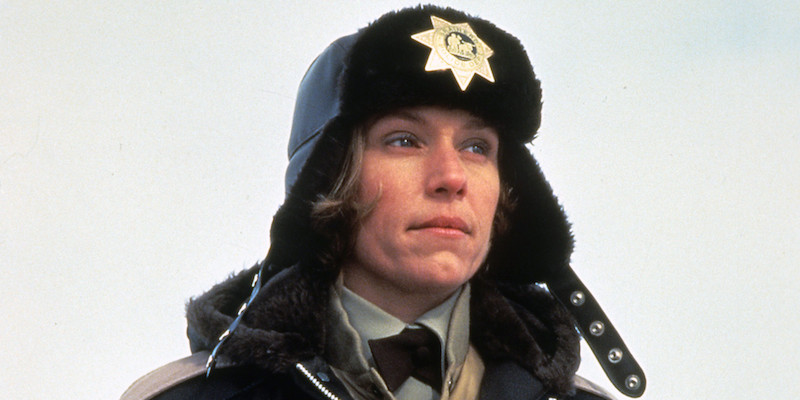 The cruiser passes a statue of Paul Bunyan, which looms over the highway and over the movie’s characters, eyes wide, teeth bared, fingers curled as if on the verge of making a fist: the alpha male of all alpha males. Grimsrud looks up at the statue. Marge seems not to notice it.

“There’s more to life than a little money, ya know,” Marge says gently. “Don’tcha know that?”

She never gets her answer, but we do. Fargo is many things—a lusciously black comedy, a harrowingly inventive gorefest, and a loving satire of Minnesota nice. But it is also, perhaps most enduringly, a story about all the damage that patriarchal masculinity inflicts on men and, by extension, on everyone around them.

Fargo’s plot revolves around a botched kidnapping ordered by Jerry Lundegaard (William H. Macy), a stammering used car salesman who can’t bring himself to ask his father-in-law for money and instead decides to secure it by ransoming his own wife. In the first scene—which is also the only scene in Fargo to actually take place in Fargo—Jerry hires Grimsrud and his partner, Carl Showalter (Steve Buscemi) to carry out the kidnapping, promising them part of the ransom and an Oldsmobile Ciera. Carl questions Jerry’s decision and seems to sense the fear and inadequacy that led him to it.

As the rest of the film unfolds, it’s tempting to think about how much bloodshed one sentence could have averted. Much of Fargo is a chain reaction of male humiliation and violence. Jerry’s father-in-law humiliates him and strengthens his own suspicions that he’s not a real man, so Jerry convinces himself that his only recourse is to put his wife through hell. Carl is humiliated in his attempts to prove himself as a career criminal, so he goes on a killing spree. Carl insults Grimsrud, so Grimsrud puts Carl through a wood chipper. By the end of Fargo, patriarchal masculinity hasn’t just poisoned everything it touches. It has reduced everything to a bloody pulp. 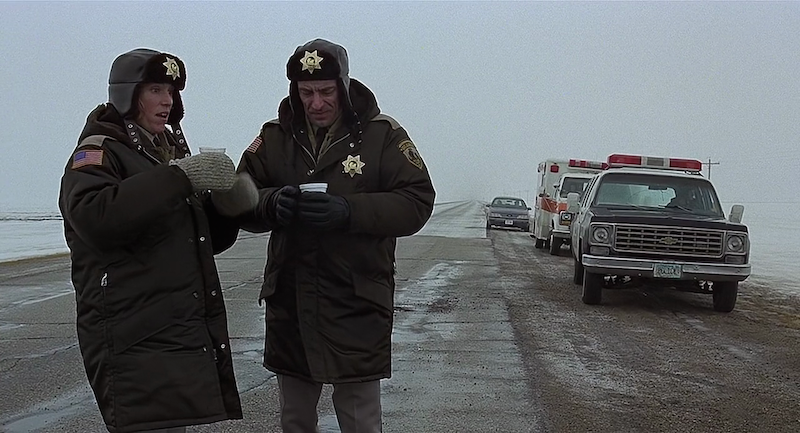 Marge Gunderson doesn’t make an appearance until over a third of the way through the movie, when—heavily pregnant and swaddled in a police-issue parka—she turns up to investigate a crime scene that Carl and Grimsrud have left in their wake. For the audience, which has already sat through a kidnapping and a triple homicide, there is a palpable sense of relief: Mom’s home.

After half an hour of snowy vistas and arterial blood, Marge is all stability and warmth: She offers a subordinate food off of her own plate and comforts another with a joke and a smile when she can see he is ashamed of a blunder. She questions suspects not with force but with cheery firmness, suggesting that she’ll figure it out eventually, so they might as well come clean now.

Still, Marge has stumbled into a story that does not belong to her, and she knows it. She has to figure out a way to grasp the logic of the crime she’s investigating, and she finds it when she meets with Mike Yanagita (Steve Park), an old high school acquaintance.

Google “Mike Yanagita” and you’ll find endless fan theories about what he signifies within the puzzling world of the Coen Brothers. For my money, Mike offers Marge a chance to glimpse the heart of masculine inadequacy: at first, it seems like Mike is about to make a pass at Marge, then he invents a story about a personal tragedy and bursts into tears. As she comforts him, Marge has the chance to realize what motivates some of the most inexplicable and destructive male behavior: not greed or malice or even bloodlust, but insecurity and fear.

From that moment on, everything seems to fall into place. Marge solves the crime and nabs the killer, and in the movie’s last scene, we glimpse her in bed with her quiet, gentle husband. The two are warm in their nest, planning for the birth of their child. Fargo may open with scenes of violence presided over by an all-seeing, ax-wielding daddy, but it ends by showing us a mother and the promise of a new generation that loving parents can raise.

Twenty years after the film debuted, we’re still in an era where constrictive gender norms make it hard for men to openly express emotion and compassion (see: #MasculinitySoFragile). Even after two decades, Marge’s investigation of the forms of violence the patriarchy inflicts is as resonant as ever.

But Fargo was set in North Dakota, not Minnesota.