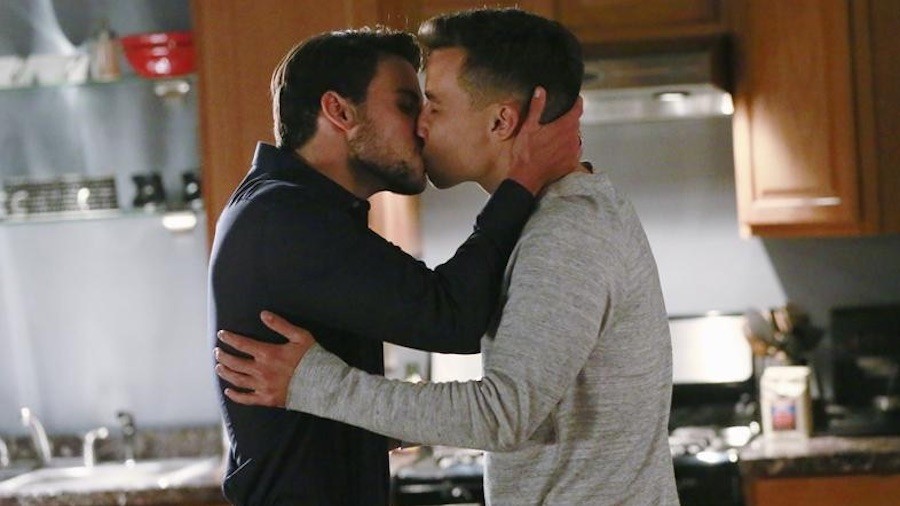 How to Get Away With Murder is full of all kinds of drama. It’s jam-packed with intrigue, back-stabbing, the titular murder. But the season finale also hinted at the start of a plot-line that’s grown exceedingly rare to see on TV: a couple dealing with a positive HIV test. Season 2 picks up right where we left off, and it holds promise for the future of HIV positive people being represented on primetime television. On the show, Connor (Jack Falahee) is one of the talented students taken under the wing of attorney Annalise Keating (Viola Davis). His legal talents are supplemented for his unique approach to getting information out of people—using his good looks to seduce men into indiscretions. The promiscuous bisexual character came off as a walking stereotype in the first season, but then things started getting complicated. His on-again, off-again boyfriend Oliver (Conrad Ricamora), who took their relationship much more seriously, suggested they both take an STD test, just to be safe. It became a turning point in their relationship in the first season.

I expected the tests to have the inevitable outcome: Connor, who has spent the entire season having casual sex with a multitude of partners (often with the goal of extracting information or favors), will inevitably test positive. We’ll all get a lesson about safe sex. Yet, the season finale revealed that he got negative results. Instead, it’s straight-laced Oliver we see curled up in bed coping with a devastating diagnosis—he’s the one carrying HIV, and that means Connor may have been exposed. Some viewers felt betrayed, viewing it as very “after school special” type melodrama. But, to me, the show felt more complicated. Yes, diagnosing a character with a chronic illness at the season finale is sort of a classic plot shocker designed to string viewers along. But it’s telling that HIV in particular is viewed as an “after school special” when situations like this play out every day across the United States, with about 50,000 people diagnosed with the virus annually.

Oliver’s situation disrupts the narrative that promiscuous people engaging in obviously high-risk behaviors are the only ones who get HIV. People who exercise reasonable precautions like using clean needles and safer sex supplies can still be infected with HIV, and promiscuity is no indicator of HIV status. People like Oliver who play it safe can still get STIs. The show’s innovative approach to HIV makes it stand out on television. Last season, there were only two HIV-positive characters on television, period, and one was on cable (HBO’s Looking). The handling of the diagnosis on How to Get Away With Murder is par for the course with Shondaland productions, integrating both drama and nuance into a fraught topic, upending the assumptions of audiences, and making people reconsider the lives of people who are rarely seen on TV.

The “after school special” criticism hits home because of how HIV/AIDS has been represented on TV. For years, HIV/AIDS was the subject of heart-wrenching educational specials or the weapon of choice for lurid TV serial killers—but not the realm of sympathetic characters on primetime, mainstream shows. In 1985, NBC ran An Early Frost, a made-for-TV special that attempted to dispel some AIDS myths, followed by television shows featuring an assortment of tragic HIV positive characters through the mid to late 1980s.

By 1988, though, the tide had turned against HIV positive people, with Mike Barnes (Richard Cox) knowingly infecting his partners on Midnight Caller’s “After It Happened”—to add insult to injury, the character was bisexual, playing on cultural fears about bisexuality. “Gays,” the Los Angeles Times informed readers, weren’t fans of the episode. It’s worth noting that The Golden Girls took on HIV-stigma at the time. In an episode where one of the four Golden Girls waits for her HIV test results, she finds that even a life-long friend refuses to drink from the same mug as her. Her test result winds up being negative. Ten years later, Law & Order played on the theme of HIV as weapon with “Carrier,” an episode in which a character was ciminally charged for deliberately infecting sexual partners. Unsatisfied the first time around, the venerable franchise returned to the concept in 2010’s “Quickie,” in which an HIV-positive rapist rampages across the city infecting victims.

Meanwhile, documentaries And the Band Played On and The Ryan White Story attempted to tell the real stories of HIV—the innocent hemophiliac who became a poster child and the gay men who fought for health care in the height of the crisis. HIV positive characters flickered in and out of the television landscape on both network and cable, with many adhering to some familiar stereotypes: Gay, promiscuous, white. As Americans have become less afraid of HIV/AIDS in recent years, we’ve seen condom usage rates drop among young people and stories of HIV-positive characters dwindle onscreen. HIV has once again been reduced in the public mind to a phantom threat—not something that happens to real people.

But meanwhile, the number of people living with HIV is on the rise, even as the infection rate stays constant. Thanks to significant advances in medicine, drugs to control the progression of the virus are available, potentially keeping patients in a state of chronic nonprogression for decades—as seen in the case of the character Wes on Canadian TV show Regenesis, which ran from 2004-2008. HIV is no longer a death sentence, and it won’t necessarily push a patient into full-blown AIDS. That’s what makes storylines like this so important, as the popular perception of HIV doesn’t necessarily match with reality. Oliver isn’t fated to die or waste away as per classic soap opera specials of the 1990s: He can continue to be a healthy, sexually active gay man, just like many of his real-world counterparts.

And HIV stigma is still very real, with many people refusing to date HIV positive individuals despite evidence that it’s perfectly safe. These days, open conversations about getting tested—let alone going in to get tested together—rarely show up on television, even though for many sexually active adults, they’re an important part of new relationships. In the gay community in particular, many men live with the specter and memory of AIDS, and may bring up testing as they settle into relationships with new partners. It wasn’t that long ago, after all, that blood testing was required before marriage in many states, and people can still be slapped with criminal charges for transmitting the virus to their partners. A handful of nations still restrict immigration and sometimes even entry visas for HIV-positive tourists.

With that cultural burden, How to Get Away With Murder is plunging into the issue on the second season, starting with a frank discussion of sexual activity right in the opener. Pre-exposure prophylaxis, or PrEP, takes center stage, introducing viewers to a critical development in HIV prevention and treatment. The straight community is largely unaware of PrEP, or only has a sketchy understanding of how it works, even though they can benefit from it. People at risk of HIV can take PrEP to avert infection, and the treatment is extremely successful for people involved in needlestick incidents and other exposures to the virus, including sexual assaults where the HIV status of the assailant is unknown. By putting Connor on PrEP, the show brought the topic into the mainstream, and it was the first time it had ever shown up on network television.

While HBO’s Looking explored PrEP in detail over its two seasons, network television has a much wider reach—even wider in the context of How to Get Away With Murder, which isn’t pitched as an LGBQT-oriented show although creator Pete Nowalk is gay and it features gay as well as bi characters. Audiences who might not even be thinking about the current status of HIV/AIDS research and treatment in the United States are confronting it in a storyline with two men exploring how their relationship is going to change in response to a diagnosis. But the relationship and the diagnosis aren’t a central plotline of the series, and they’re not being played for cheap effect. Instead, they’re just part of main character Connor’s life, one more thing he has to deal with in a tangled web of murder, secrets, and lies.

How Connor and Oliver will deal with the HIV diagnosis—including PrEP—is one of the pervasive questions of the show’s second season, as illustrated in a tense scene in the season opener. In the episode, Connor begins treatment and waits to see if it’s successful—all while refraining from sexual activity with Oliver, per treatment protocol. “We have to wait,” Oliver says, shying away as Connor says, “Yeah, for sex-sex, but we can do other stuff.” The two have a taut tete-a-tete as Connor pressures Oliver, who insists that he won’t enjoy sex if he’s putting Connor at risk. Familiar relationship dynamics exist as Connor selfishly asks Oliver to get him off, reminding viewers of the way Connor used his boyfriend’s hacking skills in the first season.

Oliver fears Connor will leave him, convinced that his status will be the death knell of their relationship. Who’s to say that his boyfriend won’t bail on the relationship now that it’s become so intense?

He expresses his fears, saying: “You can’t know for sure if you really want this.” Connor, startled, responds: “By ‘this,’ do you mean you? Because I do know that. Look, I’m not going to leave you just because of something that’s not that big of a deal anymore.”

When faced with chronic illness, some people do cut and run, arguing that it’s not what they signed up for. Others stick it out, even as the terms of their relationships change. The nuanced handling in the first episode of the second season suggests that How to Get Away With Murder will be tackling the issue responsibly, and that’s a welcome shift from the historic handling of HIV in pop culture.

In the United States, 16 percent of HIV-positive people don’t know it. Don’t be one of them. Get tested. 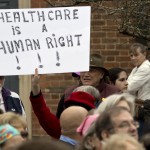 by Imani Barbarin
Many politicians see disability as a personal problem to be overcome only by those with diagnoses.