How “Her Story” Challenges the Way We Think About Trans Romance 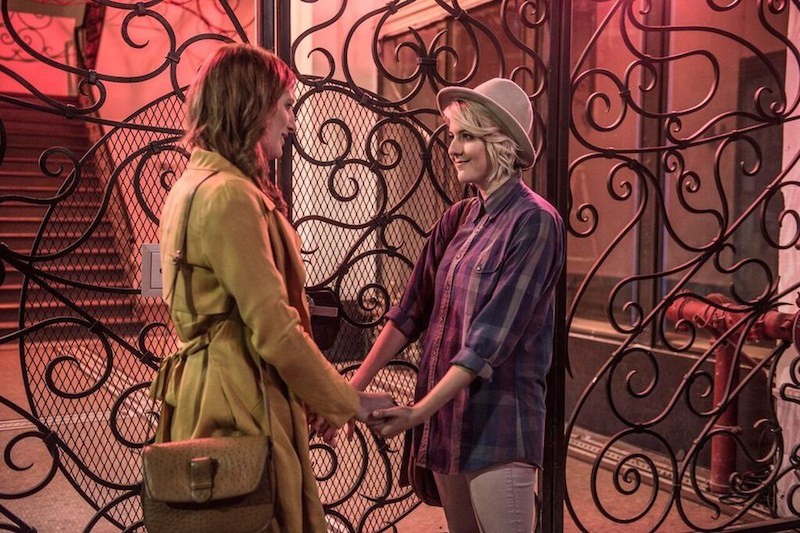 This article includes some plot details from the first season of Her Story.

It’s rare to find pop culture that honestly explores the love lives of trans women. We’re barely given time in the spotlight for any reason, but it’s even more rare to see trans women as romantic partners onscreen. Way too often, the reason behind the lack of trans representation in our culture is not so much conscious bigotry as it is a sheer sense of indifference in the writer’s room. Why create a trans character when it’s so much easier to create a cisgender one?

Her Story breaks from that way of thinking. Recently nominated for an Emmy in Outstanding Short Form Comedy or Drama Series, the independently produced, six-episode web series is directed by Sydney Freeland and cowritten and coproduced by Jen Richards (who created We Happy Trans, a website celebrating positive transgender experiences) and writer and activist Laura Zak. The show revolves around Violet (played by Richards) and Paige (Angelica Ross), two trans women trying to make ends meet while living in Los Angeles. Violet is a waitress by night and lives with her partner, a cisgender business man, and Paige works for Lambda Legal as a representative for trans women who have been discriminated against in both institutional and socioeconomic settings. 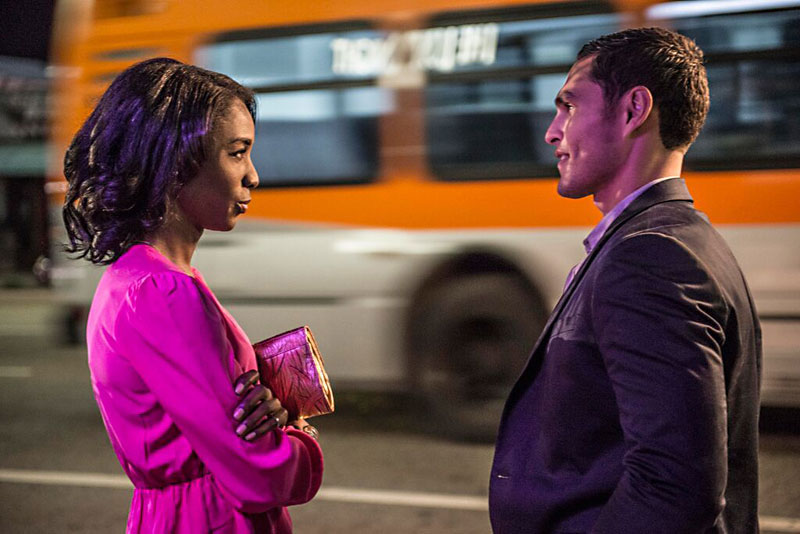 Angelica Ross as Paige and Christian Ochoa as James in Her Story.

One night, a queer journalist named Allie (played by Zak) sees Violet while out for drinks. Interested in writing a story about trans women in Los Angeles, she proceeds to ask Violet for an interview about her trans status. After an awkward start, the two decide to give the interview a second chance—building the foundation for a romantic bond between the two women. Paige, meanwhile, navigates the sexual and romantic struggles of being a passing professional trans woman who dates cisgender men. As her relationship with a man named James blooms, she’s unsure how to divulge her trans identity. Throughout the first season, Violet, Paige, and Allie’s worlds collide, and the three are forced to deal with the problems and complications that trans women experience while dating in a world that’s hardly supportive of transitioners.

Her Story isn’t just willing to explore the romantic conflicts that trans women go through, though. It also sheds light on the social and cultural problems of meeting, dating, and loving trans women. For instance, in one episode, Allie faces serious backlash from her queer cisgender friends after admitting that she finds Violet attractive. Throughout the series, she’s forced to confront her friend Lisa (Caroline Whitney Smith), a transphobic radical feminist who repeatedly insists trans women are not women due to their biological sex. Likewise, Violet wonders whether dating women will make her less of a woman by society’s standards, an anxiety that’s one of many reasons why she struggles to commit to dating a woman. Her Story isn’t just honest about transitioning; it refuses to glamorize the experiences of trans women falling in love. Romance may bloom, but it never comes easy.

It’s important for a series focusing on trans women to show the hardships of dating while trans. After all, love can be extremely complicated for us in the real world. For the longest time during my transitioning, I held off on dating because I was afraid of how others would treat me. I felt uncomfortable being with a man or another woman because I was unsure if they would objectify me, insult me, or act disgusted towards my transitioned body. Even now that I’ve overcome those initial fears, I still encounter so many questions about my transitioning while contemplating asking people out. How should I disclose my trans status to my partners? Is there an appropriate way to do so if my date isn’t aware? Likewise, is it worth dating someone if I knew them before I transitioned? What kind of baggage enters into a relationship if I date someone from my hometown? For a cisgender woman, these questions might seem strange. But as a trans woman, this is an everyday part of my love life.

Sadly, most LGBT-centered narratives that deal with trans women don’t exactly dive into the issues that people like me deal with. In fact, most queer narratives aren’t interested in looking at the ways trans women date at all. Traditionally speaking, LGBT romance dealing with queer women focuses on cisgender experiences. Save for stories like Casey Plett’s A Safe Girl to Love or GaymerX’s Read Only Memories, trans love is outside the realm of traditional queer narratives.

As a trans woman, this makes dating incredibly hard—I have no point of reference to explain myself, my body, and my life to my partners. When I’m with someone, I have to give them a short run-through about consent, comfort levels, how trans body parts function, and so on and so forth. Granted, I don’t mind having those conversations. My partners have been appreciative, understanding, and respectful. But it hurts knowing that our society simply doesn’t understand the fact that trans women and cisgender women have different relationships with love and sex. It feels isolating and alienating. It makes me feel like I’m left out.

Her Story doesn’t just focus on trans women’s romantic and sexual experiences. It also looks at the relationships that we have with cisgender people—both in platonic and romantic circumstances. For instance, when Allie approaches Violet for an interview about being transgender in Los Angeles, she’s immediately clocked Violet as being trans. Embarrassed by her behavior, Allie pushes herself to be more empathetic towards trans women. Likewise, as Paige grows closer to James, she fears that their budding relationship will crumble if her identity is not delicately disclosed. Because Paige passes, she is trapped by her cisgender partners’ expectations that she, too, is cis.

Her Story never implies that Paige and Violet must teach their partners how to love trans women, either. Both women treat their lovers like adults by communicating their problems and encouraging their partners to take initiative in learning about trans life. And, while Her Story shows the beautiful and happier moments of trans romance, there’s also many dark parts of the series that the story shows in honest detail. Violet struggles to escape the controlling behavior of her abusive boyfriend. Allie finds herself enabling her transphobic friends. Paige tries to balance her professional life with her love life, and, as with many things in transitioning, sometimes life simply gets in the way. Violet and Paige face challenges while dating in Los Angeles, but they do so in a realistic manner.

Her Story reveals that it’s not enough simply to create a trans character and turn them into a love interest.  The show embraces the hardships, conflicts, and nuances of transitioning and being trans by accepting the fact that trans women deal with problems that are unique to their identity. Sometimes transitioning is really difficult. Life sucks, and people can be cruel. Granted, suffering doesn’t necessarily negate joy. But love, sex, and relationships leave trans women in very vulnerable positions—ones in which cisgender partners must be receptive and understanding.

Her Story shows both sides of that coin. It reveals how trans women are hurt by abusive behavior from controlling rescuers. It shows how cisgender partners need to stand up to transphobia in their lives. And, most of all, it examines how trans women can and do have fulfilling romantic and sexual lives. Even while dealing with transphobic discrimination and harassment, trans women can still find their special someones. One can only hope that writers across the entertainment industry look at Her Story and see just how trans romance can be represented in an enjoyable, fulfilling, and realistic way.