The Witching HourWhat the CW Loses to Magical Surrealism 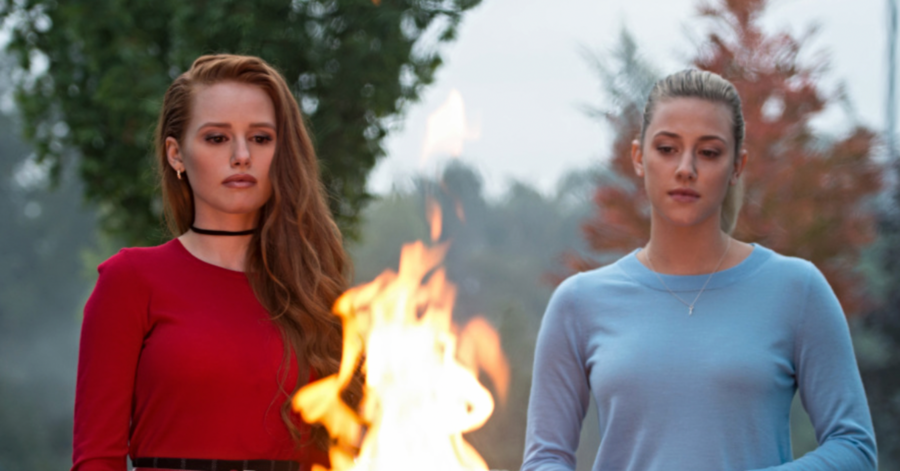 Over the last 10 years, the CW has undergone a transformation: In the early 2000s, One Tree Hill, Gossip Girl, and other shows covered teen drama in ways we were accustomed to seeing; the formula was foolproof, guaranteeing at least six seasons for each of their teen-targeted shows. Increasingly, though, as viewers became accustomed to this formulaic approach, the network decided to shift toward female-led TV shows with a supernatural bent. After Stephenie Meyer’s bestselling Twilight series swept the United States, darkening the young-adult genre in publishing and onscreen, television began leaning more heavily on strong female protagonists who push through seemingly impossible obstacles—and their new formula worked. On September 10, 2009, the Vampire Diaries became the CW’s most-watched premiere, drawing more than 4 million viewers. And after eight successful seasons, the CW landed on a new niche: teen dramas with lots of magical realism. But what gets lost as magic takes the place of the thoughtful interiority that dominated the network’s previous teen-focused shows?

What’s not to love about a coming of age TV show loaded up with griffins, gargoyles, Jingle-Jangle, and characters who subvert the norm of the “regular” televised teen girls who dominated CW’s previous shows? Apparently, a lot. In her 2004 book, Ordinary Enchantments: Magical Realism and Remystification of Narrative, University of Texas at Arlington English professor Wendy B. Faris writes, “Although we can discern certain common strategies between feminist issues and magical realist practices, magical realism is not a feminist genre.” And still, the CW has chosen to employ magical realism in Riverdale and nearly all of the teen dramas that have followed it. While some critics have praised Riverdale for employing an out-of-the-box approach, there’s still a lack of analysis of the CW’s recent attempts to portray bold women.

Ultimately, the CW’s teen protagonists suffer because they’re weighed down by an astounding amount of trauma, while viewers are manipulated into thinking that surviving the impossible is a sign of strength rather than avoidance. According to Maggie Ann Bowers, an English lecturer at the University of Portsmouth, the “patriarchal authority in magical realism defines women by making all assumed female attributes negative as opposed to the positive male attributes.” The CW’s female leads neglecting to grapple with their trauma caters to a harmful narrative wherein sucking it up and “acting like a man” is associated with strength. Not allowing room for emotional growth feeds into the harmful stereotype that it’s brave to ignore our fears, and thanks to stifling storylines that keep teen girls from engaging with their emotions, these teens lose agency over themselves.

Betty, who’s arguably the star of Riverdale, transforms from innocent girl next door into, as Netflix dubbed her, a “total fucking badass.” Betty’s shift begins in Season 2 when she decides to track down her neighborhood’s notorious serial killer the Black Hood and then hide his identity at the expense of other people’s safety. For instance, when she learns that a shooting may take place at a local town hall, she decides to pull a fire alarm during the event instead of alerting attendees and authorities beforehand. In Betty’s case, shouldering the burden of her father being the Black Hood alone is a form of strength, a way of showing how capable she is of handling crises without any support from anyone. Her ability to move on from her mother abandoning her and her father trying to kill her is treated as her breaking the mold instead of a trauma that needs to be addressed. She is a feminist icon, apparently, because though she digs her nails into her skin and says incredibly deranged things to her kind-of brother Chic (Hart Denton), she still holds herself together for the most part.

Her badassery is solidified when she confronts Chic about lying to her family about who he really is; she holds a lighter to his sleeping face and says, “I catch bad men. I caught Clifford Blossom. I caught the Sugarman. I caught the Black Hood. And you know what they all have in common? They’re dead. Consider yourself warned.” It’s a bold statement, but Betty regularly offers bold lines without us giving us any peek into her psyche. What she’s thinking? How she’s actually doing? How is she navigating all this trauma? Riverdale chooses to focus on Betty as a magical and mysterious force instead of tapping into her humanity. Unfortunately, Betty isn’t the only character on Riverdale facing these challenges.

Cheryl Blossom (Madeline Petsch) and Veronica both have deeply rooted issues they’ve decided not to address; as the seasons progress, these characters operate under the guise that ignoring their own trauma and leaving behind pieces of themselves constitutes strength. Betty’s father tries to kill her; Cheryl comes out as queer and is placed in a psych ward; and Veronica detaches from her mob boss father, but none of them adequately addresses these life-altering events. Maneuvering whatever good or bad things come is only of the only ways these characters are allowed to process hurt. Each of them bottles up their emotions to the point that an outburst is the only reasonable outlet. Nowhere is this more present than on The Chilling Adventures of Sabrina, Aguirre-Sacasa’s Netflix adaptation of Sabrina the Teenage Witch. 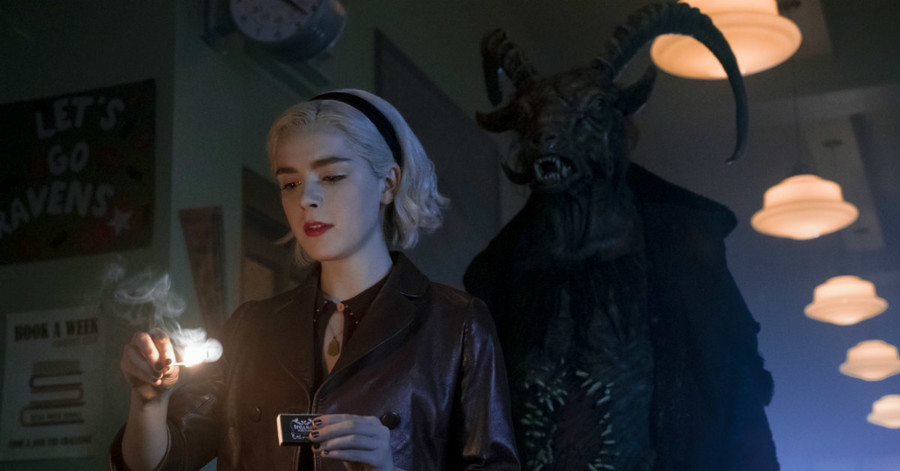 On this series, which employs a darker approach than previous Sabrina the Teenage Witch adaptations, Sabrina Spellman (Kiernan Shipka) is supposedly driven by a desire for justice, but a quest for power and the liberty that accompanies it quickly overshadows her commitment to maintaining a moral high ground. Sabrina is a half-witch, half-mortal who teeters between her two worlds as she approaches her 16 birthday. Though she’s supposed to sign herself over to the Dark Lord at 16 and divorce herself entirely from the mortal world, she struggles with making this decision and continues straddling the line throughout the first season. She resists the Dark Baptism ritual because of her feminist leanings, but by the second season, she’s so out of touch with these principles that her aunt Hilda (Lucy Davis) tells her she needs to stay in their enchanted home while she gathers her bearings.

After Lucifer brings her back from the dead so she can save her coven from witch hunters, she says, “Something happened to all of us, a trauma.” But instead of confronting the trauma, even after she becomes a demonic representation of Jesus Christ, she continues performing miracles all across her small town and ignoring the impact of her actions on those she claims to love. Sabrina believes it’s her life’s purpose to fix the mortal world, and more specifically, the relationship between witches and mortals, but she’s so wrapped up in her mission that she stops growing as a character. She continuously exposes her human friends, Roz (Jaz Sinclair), Harvey (Ross Lynch), and Theo (Lachlan Watson), to a supernatural world that goes beyond their understanding without once considering how they feel about it. She resurrects her boyfriend Harvey’s brother without his permission, restores Roz’s eyesight without her consent, and tosses a comfort charm bag on the library table where Roz and Harvey are sitting. At the end of Season 2, the trio even operate the Gates of Hell, though they’ve told Sabrina numerous times that they’re uncomfortable dabbling in the witch world.

When Sabrina gets more absorbed in the witch world, where she is mandated by a witch court to spend half of her time, she spends less and less time with Roz, Harvey, and Theo. After the Academy of Unseen Arts, the witch school Sabrina attends, is temporarily closed following an attack by witch hunters, she tries to fill her time loss by refocusing on her mortal side. Her school is closed, her boyfriend is momentarily dealing with a drinking problem, and she runs to the mortals she’s left to lean on by bartering for their love with gifts. There’s no deep, emotional connection, and we see little sincerity in her love for others. Instead, the once iconic female activists in Season 1 who founded the Women’s Intersectional Cultural and Creative Association (W.I.C.C.A.) have fallen apart at the seams and are angrily communicating their needs.

Sabrina decides to make up for time lost by helping Roz with her eyesight without actually consulting her. “No!” Harvey protests when Sabrina reveals her plan. “You’re going to fix Roz? Like you fixed my brother?” Though Sabrina’s intentions are goods, she insists on caring for her friends the way she wants to instead of asking them what they need from her. Because Sabrina leans solely on magic, like Riverdale, it loses so much of what makes their characters sympathetic. The young witch who was once worth cheering for succumbs to evil as “liberation from human life.” The writers skip over scenes that could be relatable in favor of what makes the show gritty and exciting, preferring the show’s magical guise to what, in the early 2000s, would have been a more thoughtful plot around concepts like her first time having sex, which is handled almost nonchalantly, or her relationship with the people around her and with herself. 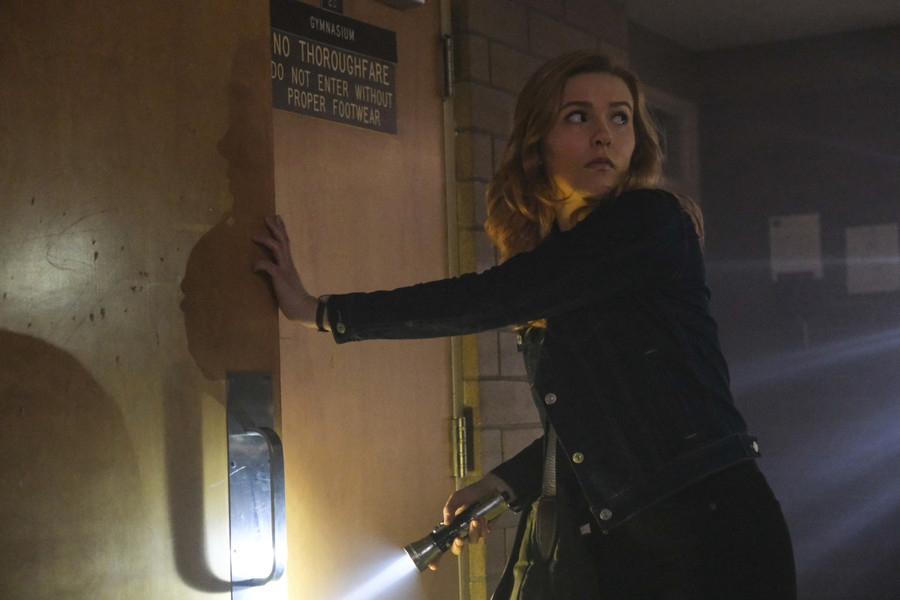 In comparison to Riverdale and Sabrina, Josh Schwartz and Stephanie Savage’s CW adaptation of Nancy Drew has had the most promising start. Since premiering in October 2019, Nancy Drew has been relatively grounded with a simple premise: budding investigative journalist Nancy Drew (Kennedy McMann) is an ordinary teen girl navigating a world that’s anything but normal. Nancy is solving crimes all around her hometown Horseshoe Bay, but she abandons sleuthing after her mother’s untimely death. Like Riverdale, Horseshoe Bay is a ghost town shrouded by fog and mystery, and Nancy has regular encounters with the supernatural, and like the female characters on Riverdale, magical realism is a stand-in for Nancy’s character development.

Nancy Drew has well-rounded female characters but they’re already failing to address their own issues. Hard-edged Georgia Fan (Leah Lewis) is being tailed by death, but she’s in denial. In the midseason finale though, Nancy finally confronts deeply repressed memories: She finds a journal she wrote in as a child and breaks down to her father after nearly an entire season of pushing him and her emotions away, letting pain (and what appears to be PTSD) wash over her. Only time will tell if Nancy Drew will be another in a line of CW shows abandoning character arc in lieu of magical, mysterious, entertainment. Katy Keene, a spinoff in the Riverdale universe, is on the horizon, and it’s still hard to tell if the show will follow the same formula as its predecessors.

The CW has always delivered shows that balance ridiculous storylines with fun, absurd characters. Arguments have been made about Gossip Girl and One Tree Hill being anti-feminist because female characters were routinely pitted against one another on both shows, but these series also showed teen girls growing into women more accountable to themselves and to their friends and families. These characters continued learning from their mistakes and experiencing milestone moments, which can be somewhat of a blueprint for the hyper surrealism ushered in by Riverdale. There is beauty in showing the humanity of teen girls and blending violence, sex, and spells with reality, but expecting viewers to root for unrealistic characters, simply because they’re teen girls who do whatever they want, isn’t progressive. It is simply housing trauma under a feminist umbrella and calling it progress.

Read this Next: A City Divided