How to Raise a Boy in 1979Navigating love, gender, and punk music in “20th Century Women” 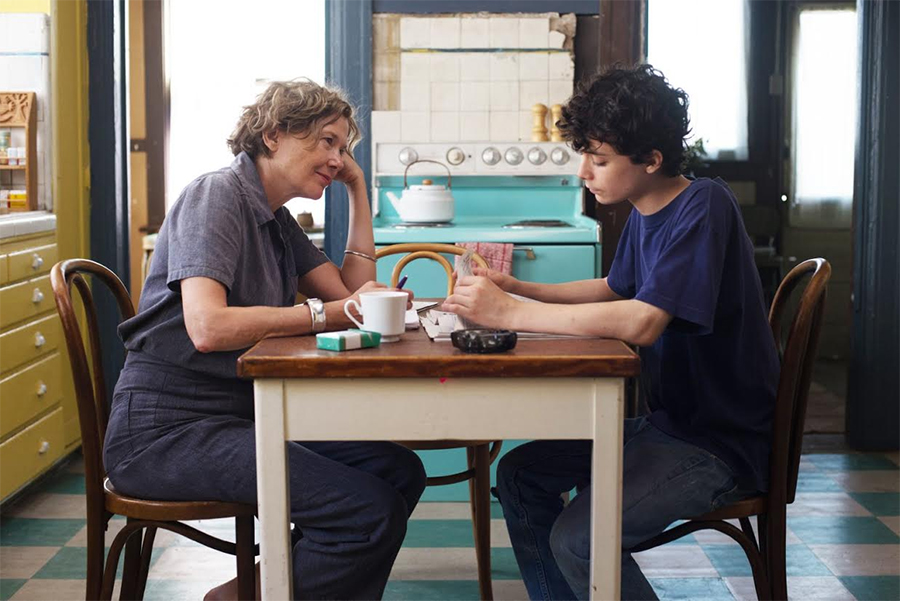 1979, Santa Barbara. “Don’t Worry About the Government” blares from an upstairs room in a gigantic pre-war home inhabited by single mom Dorothea (Annette Bening), her teenage son Jaime (Lucas Jade Zumann), and renters Abbie (Greta Gerwig) and William (Billy Crudup). “It’s gonna be easy to get things done/ I will relax along with my loved ones,” David Byrne sings as Abbie dances.

20th Century Women, a new film written and directed by Mike Mills, ultimately is a testament to that lyric—maybe not that things will be easy, but that being with loved ones, and forming community, is the only way we make it through life.

The importance of community infiltrates every aspect of this film. Dorothea invites everyone she meets over for dinner. Renters Abbie and William quickly become family. They eat breakfast with Dorothea and Jaime on weekend mornings, Dorothea cooking up a giant bowl of scrambled eggs for everyone to share. William helps Dorothea remodel the house. When Abbie has a traumatic health scare and says her rent might be late, Dorothea acts like it’s nothing, because it’s not. Listening—a careful listening you can see in Dorothea’s eyes thanks to Bening’s stellar acting—and supporting is simply what you do for family, even if it’s family you met by accident.

If you distill Mills’s two best-known previous films—2005’s Thumbsucker and 2010’s Beginners—to the point of oversimplification, they are about unsure straight white boys trying to figure out who they are with help from young girls. Certainly, these films are both also complicated portrayals of youth and young male adulthood, of success and loss and death and sexuality, but they both falter in a similar manner: Their young female characters are one-dimensional Manic Pixie Dream Girls who exist solely to help the male protagonist along his narrative path.

Though it might not appear so on first glance, 20th Century Women is something altogether different. As the plot goes, the attention is on Jamie, Dorothea’s 15-year-old son. Afraid he won’t develop properly because he doesn’t have any male role models around, Dorothea asks Jamie’s 17-year-old best friend, Julie (Elle Fanning), and Abbie to help look after him, to help him figure out how to “be a man” in this modern world where the lines between genders are starting to blur. “I think history has been tough on men,” Dorothea says, and as a result, they don’t know who they are. So, the girls take heed. Abbie lends him Our Bodies, Ourselves and gets him drunk at punk shows. Julie teaches him how boys should hold cigarettes, even though he thinks smoking is disgusting. “Guys aren’t supposed to look like they’re thinking about what they look like,” Julie tells him. 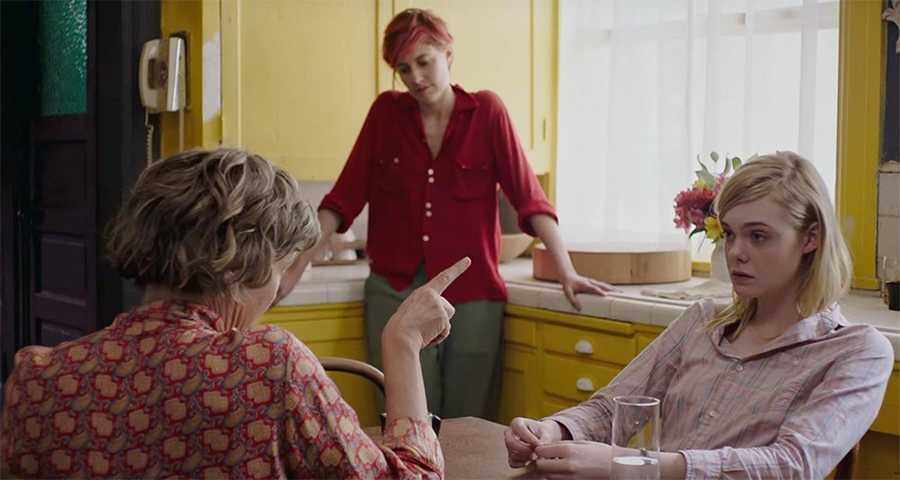 But unlike Mills’s other boy-meets-girl, girl-somehow-saves-boy plots, the women are the backbone of this film. They are rich characters, and they are given rich backstories. As a result, the film is not just a coming-of-age story about Jamie, but is a sort of bildungsroman for Dorothea and Abbie and Julie, too, even though they may be “of age,” or near it, already.

Like Mills’s other films, 20th Century Women is heavily influenced by his own life. “It felt like I was raised by my mom and sisters,” Mills told Variety. “So I was always appealing to women in the punk scene or women in my world. I always leaned to them to figure out my life as a straight white guy. So I wanted to make a movie about that.”

Eccentric photographer Abbie is the highlight of the film thanks to careful characterization, a compelling plotline that deals with women’s health in the late ‘70s, and Gerwig’s radiant acting. Abbie has been a bottle redhead since she saw The Man Who Fell to Earth, and she says she’s learned to dance to deal with her feelings, and in her dancing—just limbs irregularly bursting outward, reaching for something undefinable—we see her whole artistic, lost, stubborn personality contained in a few movements.

There is a physicality to Mills’s filmmaking, not just in the way characters move, but in the way text and object and archival footage are rendered on screen. Many moments in his films feel like sitting beside someone who’s sifting through a box of ephemera and handing you pictures and notes one by one, all the while telling you a story and constantly contextualizing it with historical anecdotes. This scrapbook-like technique is one that Mills has employed before, but it seems particularly apt in a film that is simultaneously distinctly rooted in 1979 and attempting to flatten time. Through Jamie’s growth and these relationships that ebb and flow, the film shows how life is just a string of decisions, conscious and not, that bring us together and pull us apart. In one scene, for example, 55-year-old Dorothea is onscreen in 1979, and in a voiceover, she explains how and when she dies many years later, the past, present, and future melding into one.

Because of this, the film feels brilliantly both of another time and of our own. The methods may be different—now, at-home pregnancy tests involve a plastic stick, not a complicated chemistry experiment, and kids are hardly allowed to be as freewheeling as Jamie is. But moms still struggle to relate to sons, and girls still drift away from their mothers, go to Planned Parenthood for their first packs of birth control, and rage and fight and dance with their arms gesturing wildly toward the sky.

Relevant: Male Rape is No Joke—But Pop Culture Often Treats It That Way