With “Shrill”, Hulu and Aidy Bryant Give Us a Fuller Picture of Fatness | Bitch Media 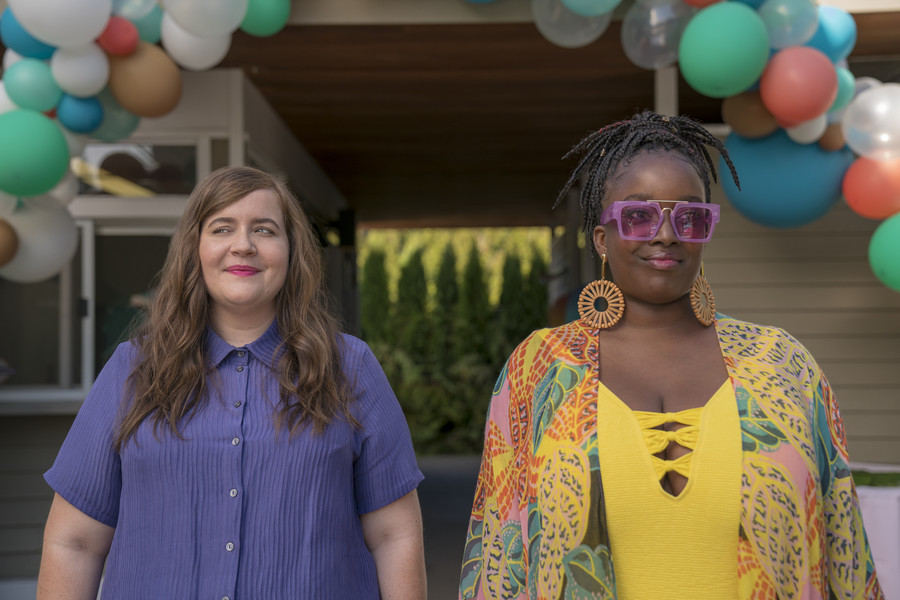 Recently, a doctor told me my exact weight. I had stopped weighing myself when I entered graduate school in 2014, with the goal of rejecting the lies I’d repeated to myself for so long: Fat girls can only date average-looking guys, fat girls should always be grateful for sex, fat girls should always overdress and keep their bodies covered in basic, form-flattering designs. I’d spent my adolescence obsessing over my weight, and I was ready for that part of my life to be over.

Shedding the rituals and thinking patterns of internalized fatphobia was a gradual process. It began with giving up scales and quickly evolved into cutting off my hair, piercing the middle of my face, and investing my spare cash into an array of bold, eye-poppingly colorful lipsticks. I even faced off with my nemesis—crop tops—and realized that I looked amazing in them and could have been loving them all along had I not been so sure they weren’t for me.

Then one fateful day in 2019 I forgot to plug my ears when a svelte doctor told me how much I weighed. The first thing I realized when I heard the number—208 pounds—was that I now weighed too much for the morning-after pill to be effective. The idea that I had possibly taken the pill in error at any point in the last five years terrified me. But what was I supposed to do the next time I needed one? Take two? Why was there a weight restriction on a pill for which so many women have the need?

The protagonist of Hulu’s new series Shrill, Annie (Aidy Bryant), has the same sobering realization, with one significant difference: She’s pregnant, and the father is a guy who has never even claimed her in public. This pregnancy is a giant wake-up call for Annie, one that forces her to look at all the ways she has navigated adulthood by shrinking herself personally and professionally. In Shrill’s concise, six-episode first season, we get to witness Annie’s gradual awakening as she sheds her doormat tendencies to become a more confident woman.

The show, based on Lindy West’s 2016 book Shrill: Notes From a Loud Woman, is a somewhat loose yet thematically faithful take on West’s evolution as a writer and rise to internet fame. Viewers familiar with West will find it easy to spot the narrative seeds being planted; halfway through the season, the show introduces a character who’s clearly modeled on her husband, Ahamefule J. Oluo. But Shrill is in no hurry to rush Annie into that relationship, focusing first on the dysfunctional courtship with Ryan (Luka Jones), who represents Annie’s insecurities. Bryant, who’s been largely underused as a Saturday Night Live cast member, brings humor and positivity to a role that could easily fall into stereotype with a lesser actress. Viewers have gotten just a taste of Bryant’s versatility in her small roles in Girls, The Big Sick, and I Feel Pretty; Shrill gives her room to breathe.

How does an outspoken fat woman reconcile her own burgeoning self-love with the understanding that it’s not enough to push society forward?

As Annie goes through the emotional wringer, her hilarious best friend and roommate, Fran (Lolly Adefope), is there by her side. Fran does the double duty of being a hilarious, three-dimensional character and a sly audience surrogate. But the voice she brings to the series is more than just a sarcastic sense of disbelief: Fran is also an embodiment of confident self-love, secure enough to know what she deserves and wise enough to know that it’s going to take time for Annie to get to a similar place. She has no intention of dedicating her life to holding her friend’s hand, especially since she has her own problems—mainly commitment issues with a revolving door of girlfriends—but by the end of the season, she’s reached a level of stability in her romantic life.

Ultimately, Annie’s biggest adversary is a society designed to undermine any personal progress she may achieve. How does an outspoken fat woman reconcile her own burgeoning self-love with the understanding that it may not be enough to push society forward? That’s the question underlying the standout episode “Pool,” in which Annie finds herself at a pool party surrounded by plus-size women in swimsuits; they ’re dancing, they’re laughing, they’re showing off their curves. Though she refuses to put on a swimsuit and join them at first, Annie lets loose emotionally: The party and its joyful attendees present her with a world where discomfort and shame don’t have to be the default. As a viewer, seeing Annie realize that necessary spaces like this do exist—and, when she reluctantly leaves the party, watching her go back to the unwelcoming world outside it—is effectively jarring. Of course it took Annie so long to get into a swimsuit; being guarded, even when the cost is her own happiness, is one safe space she counts on.

Perhaps the most fascinating episode of Shrill is its season finale, “Troll,” in which Annie tracks down an online harasser, putting her friends, family, and career to the side in her single-minded pursuit of a man so angry at her bold writing that he sends her death threats. “Troll” nods to West’s own experience of tracking down a particularly vile troll to ask him why—why did he hate her so much? Why would he impersonate her recently deceased father on Twitter?—for a story that aired on a 2015 episode of This American Life. “Troll” takes the incident a step further by having Annie physically show up at the harasser’s house; and though this proves to be cathartic for Annie, it also reveals the same self-destructive desire for validation that drives her likely doomed relationship with Ryan.

Despite Annie’s forward strides toward self-acceptance, she, like so many of us, has been trained to seek out male validation, a need born from the same societal norms that drive Annie to hate her body and shrink herself. Annie wants the men in her life to see and respect her, which is totally sane and understandable. Unfortunately, the world isn’t sane. All Annie can do is learn how to live in the madness, changing what she can and learning to love herself in the process. Shrill presents an unsparing picture of the damaging cultural conditioning that drives women like Annie to the edge, and does so with empathy and necessary humor that makes it a necessary watch in the ever-expanding television landscape

Read this Next: Lindy West’s “Shrill” Is a Hilarious Manifesto for Living Loud and Proud