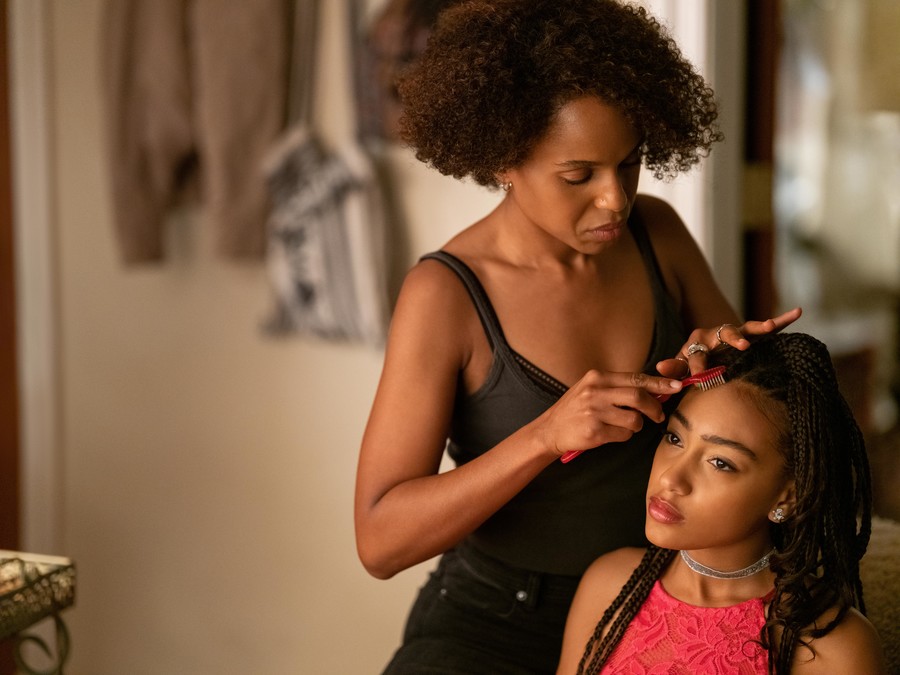 Sirens blare as the black screen fades to red and then to orange. Flames engulf a large Tudor-style home while a disheveled white woman in a bathrobe looks on from the sidewalk, distraught. Firefighters charge toward the house as she weeps, the inferno’s amber glow lighting her face. Like the title suggests, Hulu’s Little Fires Everywhere, based on Celeste Ng’s 2017 novel of the same name, begins with a blaze. But while literal flames play a role in the story, the titular “little fires” are metaphorical, as well—the series attempts to illuminate often unseen societal inequities by flicking lit matches at viewers’ assumptions about race, class, and motherhood—and then burning these assumptions down.

Set in 1997 Shaker Heights, Ohio—“one of the first planned communities in the nation”—Little Fires Everywhere is a “suburban saga” about the intersecting lives of two very different families. The Richardsons are wealthy, white, and traditional with deep ties to their affluent, orderly community: Elena (Reese Witherspoon, also an executive producer), the Richardson matriarch, is a local reporter and Shaker Heights native; her husband, Bill (Joshua Jackson), is a respected defense attorney; and their four children are students at the town’s “excellent” public schools—“a community is known by the schools it keeps,” the novel offers. As Ng writes, the Richardsons are a snapshot of “domestic perfection,” the ideal nuclear family.

Meanwhile, Black single mother Mia Warren (Kerry Washington, also an executive producer) and her daughter, Pearl (Lexi Underwood), are working class, artistic, and rootless. The families’ lives intertwine when the Warrens become the Richardsons’ new tenants, moving into a duplex that Elena inherited from her parents and cheaply rents out to those she deems “deserving” as a “form of charity.” Her similarly white, upper-middle class, strait-laced friend, Linda McCullough (Rosemarie DeWitt), marvels at Elena’s selflessness: “You’re renting to a homeless woman for practically nothing? I mean, who does that? Come on, you’re Superwoman.”

Pearl quickly becomes friends with three of the Richardson children: quiet Moody (Gavin Lewis), homecoming queen Lexie (Jade Pettyjohn), and popular jock Trip (Jordan Elsass). In order to keep an eye on her daughter, Mia reluctantly accepts a housekeeping position from Elena in the Richardson home and forms a bond with the family’s youngest child, black sheep Izzy (Megan Stott). Elena and Mia soon find themselves at odds over differences in parenting styles, Elena’s own constant overstepping, and Mia’s unwillingness to back down and make Elena feel comfortable. Their increasingly fraught relationship—and the simmering racial tension building between them—impacts their children, their friends, and their overall community.

Like the bestselling book on which it’s based, Little Fires Everywhere initially tricks viewers into thinking the story is a whodunit—who started the fire?—but then swiftly pivots into a blistering social critique. However, unlike Ng’s carefully crafted prose, the series is at times heavy-handed and melodramatic. “The show follows the broad outline of the novel, at a brisk but not hectic pace that makes it easy to keep watching,” Judy Berman wrote in a recent review of the series for TIME. “Yet it feels unshakably different.” Cuts and changes made to the source material raise the (already high) stakes, but these alterations sometimes come at the expense of the nuance and empathy that make the novel great. For instance, Pearl’s unlikely romance with Trip, which in the book is complex but ultimately sweet, begins in the show as a traumatic sexual experience. Mia’s connection with her college professor—familial in the bestseller—is similarly twisted into a predatory love affair to heighten the drama. Mia and Pearl’s loving relationship—the backbone of the original story—is now tumultuous and possessive.

In Ng’s novel, Mia’s attempt to help her coworker Bebe Chow (Huang Lu) find May Ling, the daughter she was forced to give up, is a powerful secondary plot about class solidarity, interracial adoption, and the bond between mothers. In the show, Mia and Bebe’s relationship is often uncomfortably manipulative, with Mia inserting herself into Bebe’s search for her child and pushing her coworker into a custody battle that it’s not immediately clear she wants or is able to pursue. The scene where Mia sneaks into the nursery of one of Elena’s friends à la Nancy Drew to determine if the woman’s adopted daughter is May Ling is particularly jarring.

While Ng imbues each of her characters, even the unsympathetic ones, with internality and depth, they’re regularly reduced to tropes in the series. Elena’s penchant for planning, adherence to rules, and self-congratulatory do-gooding are amplified to almost cartoonish proportions in the adaptation: Show Elena only has sex with her husband on Wednesdays and Saturdays. “It’s so much more fun when we plan it,” she says. She deems The Vagina Monologues, which she’s reading for her book club, “off-Broadway smut.” She’s prim, prudish, and adorned in Hillary Clinton–esque pant suits. The show reduces her to a caricature of white neoliberal feminism, not unlike Big Little Lies’ Madeline Mackenzie, also portrayed by Witherspoon. In the fifth episode, Elena’s backstory is explored in more detail, but the show’s expansion on the character only serves to reinforce what viewers already know: She’s miserable and entitled.

However, many of the show’s other amendments to the story succeed, throwing into sharp relief the way privilege and racial dynamics impact the citizens of even America’s most “progressive” communities. Most notably, Mia and Pearl’s race is not identified in the book, though it’s suggested they are white; in the show, they’re both Black. Ng spoke to this choice in an interview with Asia Society: “I don’t claim to know what it’s like to be black in America. I can imagine some aspects of it, but I don’t feel I know that experience well enough to write about it,” she said. “That’s part of why I didn’t write Mia as a black woman, as I mentioned above; I wasn’t sure that was a story I personally could tell.”

But the showrunners went further than just casting Mia as a Black woman; they rewrote her as a Black woman. “The show needed to make sure it didn’t fall into the same postracial falsehood of ‘I see no color.’” And, as Hanh Nguyen wrote in a recent review of the show for Salon, it doesn’t fall into this falsehood. Little Fires instead intentionally forefronts Mia’s Blackness, adding plot points that are absent in the book to create space for the experiences and perspectives of a woman of color. The novel’s white Mia may not have been racially profiled by police, but the series’ Black Mia certainly has. White Mia may have the emotional energy to feel compassion for the Richardsons, but Black Mia has less.

The show illustrates, to great effect, the disparity in society’s treatment of its white characters and its characters of color.

In the book, the Warren/Richardson conflict stems primarily from their class and lifestyle differences. Ng writes that Elena had “done everything right” and built “the kind of life everyone wanted.” To pragmatic, privileged Elena, Mia’s very existence—as a woman who is poor and yet self-possessed, seemingly less constrained by society’s rules—is an affront to her very existence, a source of “dark discomfort.” The novel explores how class impacts even more well-meaning characters’ impressions of the Warrens. When the mother and daughter move into the Richardsons’s duplex, Pearl remarks to Moody that this will be the first time she’s had not just her own room, but her own house. Moody almost can’t “believe that people could be so poor” and stifles “the urge to tell her that this [isn’t] a house, [it’s] only half a house.”

But the casting of Washington and Underwood in the Hulu adaptation allows the show to explore racial dynamics in depth, adding another layer of social critique to Ng’s hypnotizing drama. When Elena and Mia’s tension comes to a head in a confrontation, the former criticizes the latter’s parenting choices…as she cleans the Richardsons’ kitchen. In an oft-quoted scene, Mia retorts, “You didn’t make good choices, you had good choices. Options that being rich and white and entitled gave you.” Elena spits back, “I would never make this about race.” But the show doesn’t just tell viewers that privilege and oppression impact its characters; it shows us. The series draws clear parallels between the experiences of its white characters and the experiences of its characters of color.

In the first episode, Elena calls the cops on Mia and Pearl, who are sleeping in their car, unaware that the mother and daughter are her soon-to-be tenants. As the police cruiser pulls into the parking lot where her car is parked, Mia says to Pearl, “Hands visible, honey.” In the fifth episode, a policeman stops to check on Elena, who is sleeping in car, resting during a long drive. He encourages her to move along. “This isn’t the safest neighborhood,” he remarks. The camera pans to an older Black man scraping ice off his car a few houses down, making the officer’s implication even clearer. The third episode (titled “Seventy Cents”) explores Bebe’s backstory, opening with the impoverished mother going to a convenience store to buy formula for her crying, hungry baby. She’s 70 cents short, and the cashier cruelly throws her out. In a parallel scene at the end of the episode, Izzy is 70 cents short for the bus. The driver lets her on anyway—“Don’t worry about it, hon.” A moody cover of Phil Collins’s “In the Air Tonight” plays as the credits roll.

The show illustrates, to great effect, the disparity in society’s treatment of its white characters and its characters of color. The Richardsons are deemed worthy of help and given the benefit of the doubt. Mia and Bebe are not, not only because they are women of color, but also because they’re poor, and, in Bebe’s case, an immigrant. Throughout the show, characters repeat versions of the phrase “You don’t get it” when referring to the struggles they face because of their identities: Black student Brian Harlins (SteVonté Hart) says it to his white girlfriend, Lexie; Izzy says it to her straight brother Moody; Linda, who suffered multiple miscarriages, says it to Elena, who easily gave birth to four children. Little Fires Everywhere is trying to get viewers to “get it.” And though the series has its missteps, lacking the novel’s gentle nuance and oscillating in tone between “soap opera” and “intro to women’s studies course,” it sometimes succeeds at this mission.

Read this Next: Yes, We Sketch Too 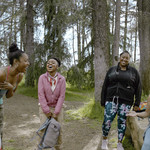 by Kriska Desir
Black women know how to create space for each other. This show is a testament to that.

Rebecca Long is a Boston-based writer and editor. Her writing has appeared in The Guardian, The Boston Globe, VICE, Electric Literature, and others. You can follow her on Twitter at @bex_long or visit her website.

Fear of a Feminist Lens

Love Is Not Colorblind