Human SubjectsShould We Rely on Technology for Transcendence? 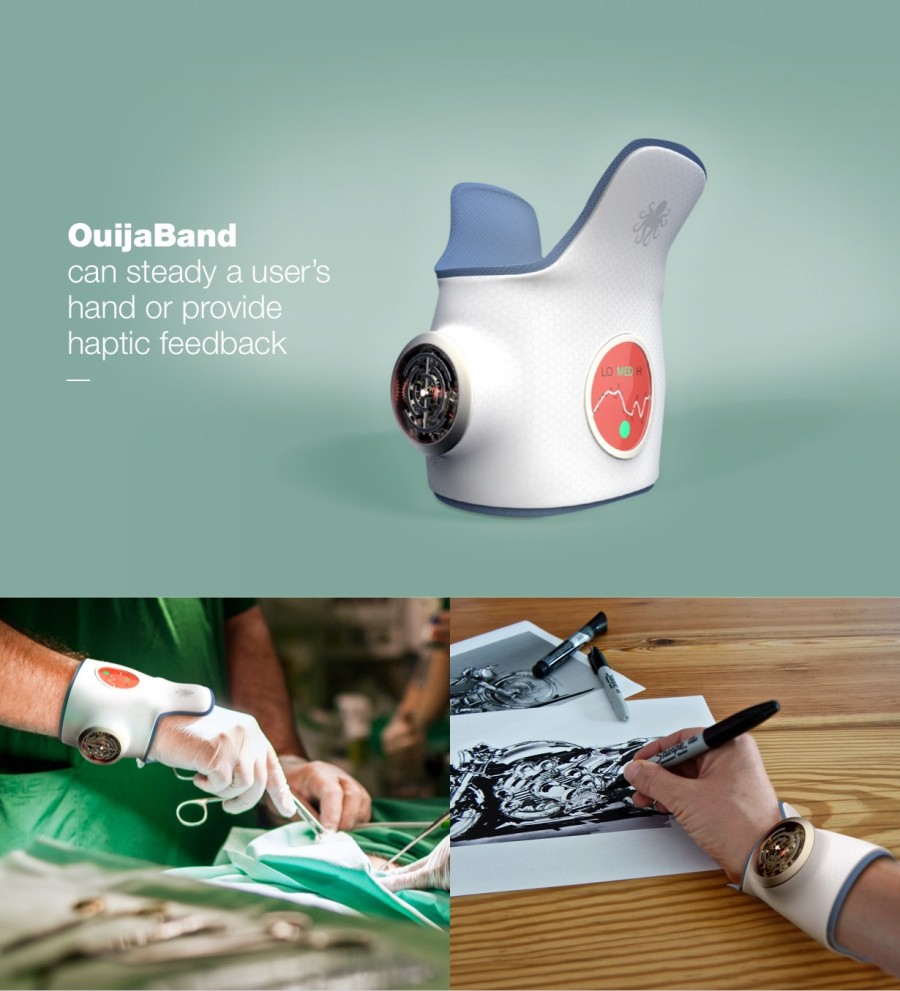 According to Fast Co. Designs’s 2014 article “4 Wearables that Give You Superpowers,” “The future of wearables is really a quest for human enhancement.” Fast Co. challenged Mark Rolston of Argodesign to come up with four wearables, the only parameter of the brief being “no watches.” (This is the same Argodesign behind Elon Musk’s “hyperloop” concept, in addition to other numerous designs projecting futuristic technologies into everyday experiences.) Rolston came through with concepts like active kineseo tape that would brace your muscles to make you stronger on exercises, or a wristband with a gyroscope and gimbal that could correct your hand movements and allow you to do things like draw a perfect circle or straight line.

All of Rolston’s designs look decidedly tech-y, eschewing fashion in order to highlight each object’s circuitry and mechanized parts. He argues that the aesthetics won’t matter because the technology alone will be too appealing, asserting, “Life is a competition to get a leg up over the next person.” And the best way to get that leg up is through technology.

While not everyone necessarily shares Rolston’s dog-eat-dog mentality, it’s arguable that technologies are primarily seen as tools for enhancement. From wearables to smartphones to body mods that remain the stuff of science fiction (for now), technologies, especially technologies of the body, are imagined as improvements to ourselves, things that push our capabilities beyond those of the average human. It’s the same drive that has someone like Shawn Sarver of Grindhouse Wetwares, a basement biohacking outfit, shoving hardware under his skin without anesthesia: “I want to punch through walls.” 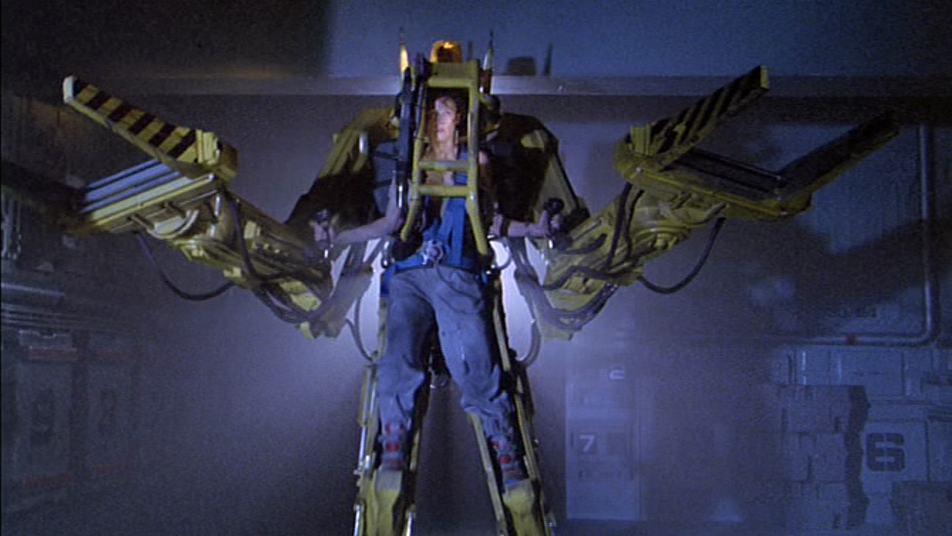 Of course, in order to enhance something, there must first be a baseline from which to enhance it. This requires a discourse of normalization, an expectation of basic functionality—the average human has four limbs, can run so far for so long, can see objects at this distance, etc. Any functionality that falls below this baseline is disability, no longer the realm of enhancement and technological augmentation, but of medical therapies and technological assistance. For the diehard technophiliac, the true calling of implants and cybernetics is to create a human no longer wracked by the vicissitudes of their own flesh; a disabled body doesn’t even track on this scale. Technologies would allow us to transcend our ailing meatbags, eliminating disease and any possibility for sub-optimal physical performance. In Rolston, Warwick, and Sarver’s visions of the future, the very concepts of “disability” and “medicine” would be nonexistent.

Certainly it’s this terminator vision of our biomechanoid futures that has captured the imagination of tech startups and Hollywood alike, and perhaps of most inventors and tinkerers since at least the late 19th century (though, let’s be real, probably a lot farther back even than that). Surely everyone dreams of surpassing themselves, and it makes sense that with a taste of what technology can do for us that we’d apply it to the fulfillment of our superhero fantasies. But is transcending our lowly corporeality tech’s highest calling?

There is another way to look at technology, one championed by people like artist, designer, and scholar Sara Hendren: that all technology is assistive. Currently, “assistive technologies” are almost always discussed in the context of “special needs” and disability advocacy, whereas augmentative technologies occupy a different—and, well, cooler—sphere. Assistive technologies have their background in medical fields, the idea being that they exist in order to address a functional physiological issue. The distinction is important, as Hendren points out: Most assistive tech designs “[embody] second-tier do-gooderism and banality” rather than encourage true innovation, and thus it’s not exactly the sexiest field for budding designers and technologists.

Meanwhile, the rest of the technological field remains wide open for speculation and imagination to drive new developments. Even when the functionality of new tech is broadly applicable, it’s the augmentation fantasy that drives interest. It’s why mechanized exoskeleton suits were developed first for the military, then for physical labor industries, and then for people with disabilities. It’s why professor Kevin Warwick, a British engineer and cybernetics professor famous for being able to control a third robotic hand with cybernetic implants, is not interested in using his cutting-edge biomechatronics work to aid amputees—he wants to “enhance fully functioning humans to a higher level.”

But Hendren argues that the term “assistive technology” is a redundancy, and that all technology, in one way or another, is assistive. “Honestly,” she asks, “what technology are you using that’s not assistive? Your smartphone? Your eyeglasses? Headphones? And those three examples alone are assisting you in multiple registers: They’re enabling or augmenting a sensory experience, say, or providing navigational information.”

Shifting our conception of technology as inherently assistive rather than as enhancement or augmentation does more than begin to reconfigure our understanding of disability as a state of the social environment rather than a state of the body; it also begins to reconfigure our understanding of performance, functionality, and human potential as necessarily interdependent. From a disability rights perspective, this shift is critical. Disability is then located in the social structures, institutions, and relationships that fail to meet the needs of different bodies, rather than locating the failing in the bodies themselves. The problem is not in the person who can’t walk up stairs whether due to age, infirmity, or physical difference, but that no alternatives to stairs were offered.

But this is more than a social project—the optimization of performance, whether through technological methods or otherwise, is factually an interdependent enterprise. Take Olympic athletes, whose performances are inextricably bound up with the cutting-edge lab research and engineering that goes into the development of their gear, to say nothing of their thousands of hours of training with coaches and peers. Even peak human performance itself, outside of technological assistance, is linked to focusing on one’s contributions to a greater whole.

Social-justice advocates know this: We are all connected. It is only by acknowledging our responsibilities to one another that we can begin to build a world that is socially and ecologically sustainable. To presume that the only way to transcend ourselves is through self-interested technological bootstrapping is to doom us to an Ayn Randian nightmare of iniquity, entitlement, and disenfranchisement. In many ways, this is already happening—how many (and which) people are investing in cryogenics and space colonies over universal healthcare and clean water?

It matters how we talk about technology. It matters if we seek transcendence of ourselves through tech or service. It matters if we draw our strength through our technologies or through each other. Because if we imagine that tech is the answer rather than an assistant, we are doomed to a reality in which the highest calling is service to ourselves, and no one else.

In this episode of Bitch Radio, you’ll hear from s.e. smith and Anna Hamilton, who you may know from various...