“Hustlers” Is a Crime Movie About Chosen Family | Bitch Media 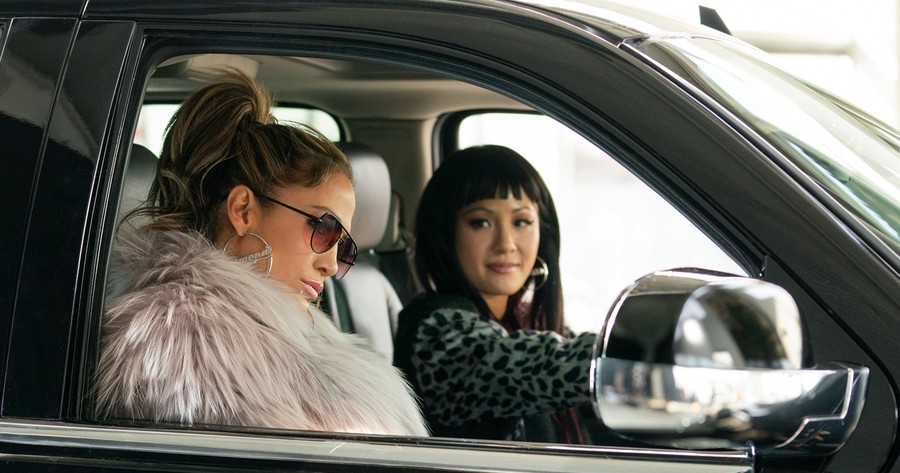 “Motherhood is a mental illness,” Ramona Vega (Jennifer Lopez) tells Destiny (Constance Wu) at the beginning of Lorene Scafaria’s crime dramedy Hustlers. If that’s true, Ramona’s relentless, often reckless empathy is cause for concern; she approaches all facets of her life with the natural intuition and resilience of a mother. When they meet for the first time, Ramona pulls Destiny into a full embrace, wrapping her arms and legs around a woman she barely knows. All Ramona needs to know is that Destiny is cold, and she has a large fur coat that can warm her. Destiny accepts warmth from this stranger, allowing herself to enveloped in a love that’s too good to be true. That scene snaps into focus when it’s later revealed that Destiny was abandoned by her mother: On that night, Destiny finally found a mother, and for her, everything that follows is about keeping Ramona’s love.

Hustlers, based on Jessica Pressler’s 2015 New York magazine article, is the true story of a group of strippers who drugged Wall Street men and stole their money in the aftermath of the 2008 financial crisis. Though sex work is society’s oldest profession and requires genuine skill, body control, and an unyielding work ethic, the women in Hustlers know that they’re constantly being underestimated. Using that to their advantage, they’re able to build a small empire, headed by their charismatic leader Ramona and her surrogate daughter Destiny. Ramona frames all of her behaviors as acts of love, whether she’s teaching Destiny how to diversify her stripping moves or instructing the larger team of women on how to seduce, drug, and steal money from white, wealthy, and unsuspecting men.

Every woman she brings under her wing is her “baby”: She knows deep down that everyone wants to be taken care of, so she creates a safety net of affirmations and constant declarations of love. Jennifer Lopez gives the performance of her career; it’s a full-bodied performance—her character’s movements on the pole are just as revealing as her dialogue—and she radiates with control and a nearly impenetrable persona. She speaks in an even-toned, smooth coo, especially when she’s lying. When a man calls her, unable to remember what happened the night before or why so much of his money is gone, Ramona lies with calmness and authority: “What are you talking about, baby? You had a good time. You seemed really happy.”

Female sex workers repeat variations of these phrases throughout the film in a way that becomes eerily subversive. On one hand, these are the kinds of phrases that men have historically used to control women, perpetuate rape culture, and excuse sexual harassment. On the other hand, Hustlers depicts a situation where women not only have access to patriarchal language but are able to go through the world without being checked by a moral higher power. It’s easy to get lost in the visceral joy that comes with watching women move this way, but there’s clearly a dark side to it as well. The embarrassment the straight white men in Hustlers feel when they’re tricked is only a microcosm of the sort of gaslighting women and marginalized folks deal with every day.

But even with this context, Hustlers isn’t trying to make a sweeping statement. It’s a crime film about found family and being let down by the people you choose to love. While the characters in most crime films are threaded together through cultural ties, Hustlers is much more concerned with the strength of motherhood and sisterhood. The opening scenes of the film depict stripping as a family business, with women from all walks of life bonding over shared economic hardships and a strong desire to be independent. Like TNT’s groundbreaking series Claws, Hustlers features a group of women who have often been evaluated solely by their bodies and low economic status and are actively grasping for some semblance of power and control in their lives in spite of it.

“This city, this whole country is a strip club,” Ramona says in a magnetic monologue. The system is a scam, so why not take advantage of it? But their actions aren’t guided solely by greed. Every woman has additional, legitimate reasons for being involved in the scheme: Destiny has a grandmother and later a daughter of her own to take care of. Ramona is a single mother with a daughter. Annabelle needs to stay afloat after her parents kicked her out of the house for stripping. And then there’s Mercedes (Keke Palmer), a sweet Southern belle who needs money for her incarcerated fiancé’s legal fees. Hustlers does a masterful job of making every female character feel original, despite the clear thematic connections to male-centric crime films like Michael Bay’s Pain & Gain, Goodfellas, and Casino, and each woman’s back story is fleshed out without any one overtaking the narrative. Cardi B, a former stripper, is a standout bit player with easy humor and natural sex appeal that makes her screen presence magnetic.

While the characters in most crime films are threaded together through cultural ties, Hustlers is much more concerned with the strength of motherhood and sisterhood.

The film serves as a fascinating counterpart to Scorsese’s 2013 crime film The Wolf of Wall Street, which depicts somewhat true events that occurred not too long before Ramona and her ladies became the sex work Robin Hoods of the New York City Financial District. In the film, Leonardo DiCaprio plays Jordan Belfort, a scamming stockbroker who lies his way into a wealthy lifestyle. Watching Hustlers, I couldn’t help but imagine Destiny or the deceptively innocent-looking Annabelle (Lili Reinhart) cleaning out Belfort’s bank account after one of his many nights of drugs and debauchery. Hustlers highlights the way women are often the real providers and caretakers in the family unit—they can’t leave as easily as men and as a result, are undervalued for the labor they do outside of traditional careers.

Ramona rallies her ladies with the promise of a matriarchy. At Christmas, all the women and their daughters gather at a large table in Ramona’s lavish apartment, whose walls are lined with sparkling stockings. The day is spent showering each other with lavish gifts and making fun of men. During these scenes, the camera frequently lingers on Destiny’s smiling face. Despite Hustlers’ feel-good filmmaking, there’s an air of contradiction in wealthy actresses portraying some of the most marginalized people in the workforce. That concern is magnified by claims floating around social media about sex workers not being compensated when the strip club where they work was shut down for filming.

There’s also controversy surrounding the #TweetYourHustle hashtag used to advertise the film, which was developed with no understanding of the danger that sex workers face online in light of FOSTA-SESTA. These claims add a bittersweet taste to the film, which displays a sensitivity and nuance that Hollywood often lacks when portraying sex work onscreen. Beneath the crime narrative, though, Hustlers is a two-hander: The heart of the story is the build-up and fallout of Destiny and Ramona’s relationship. The cracks in their operation begin showing when Ramona takes a new girl (Madeline Brewer) under her wing. Destiny is overcome with jealousy and Ramona is too clouded by her motherly instincts to realize that not everyone is willing to accept her help.

Constance Wu shines in the second half of the film, her every movement defined by her slowly breaking heart. Shortly before they get caught for their crimes, Destiny is forced into a parade of humiliation as her professional life gets in the way of her parenting. By the end of the film, Destiny is consumed by feelings of abandonment. But then, the film does something interesting: It reveals to us that Ramona still loves Destiny. In doing this, Hustlers avoids the stereotypical villain narrative. These are not two remorseless women only in it for the money. They truly loved each other as mother and daughter, and that always mattered more than the profits.