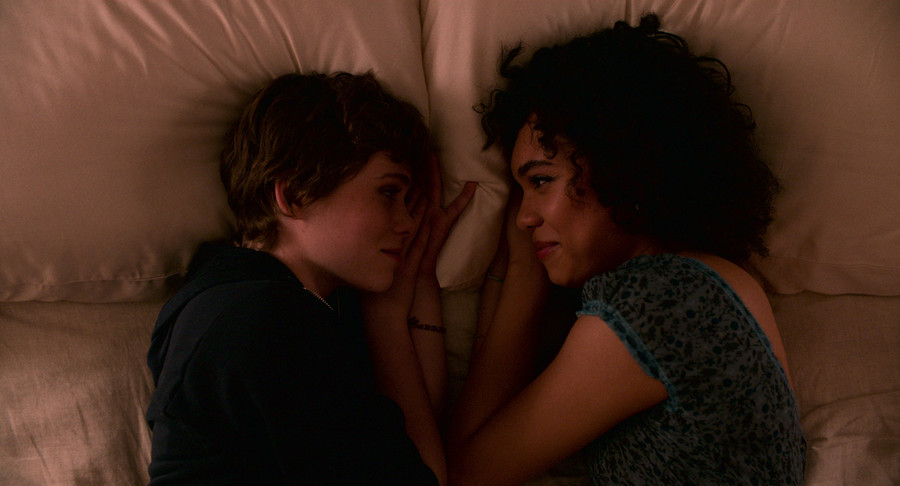 Sophia Lillis as Sydney, left, and Sofia Bryant as Dina in I Am Not Okay With This (Photo credit: Netflix)

When we meet Sydney (Sophia Lillis) in Netflix’s I Am Not Okay With This, she’s covered in blood and walking down an empty street at night in a dress and boots, a distant look on her face, as if something horrid has happened, and perhaps she’s accepted it already—or accepted that she never will. Syd, a teenage girl forced by a counselor to write in a diary because of her “moods” (“I just keep losing my temper. I don’t mean to, but it just spills out,” she says in the first episode), is just trying to survive high school, but her moods are more than moods, and her internal thought processes are layered: She’s reeling from the death of her dad, trying to figure out her own sexuality, and also simultaneously realizing she has superpowers that she can’t control any more than she can control her grieving process or her queerness.

For young, female characters, sudden superpowers have often been aligned with puberty. Or as I Am Not Okay With This cocreator Christy Hall told Variety, “I do think the rise and fall of emotion—the powerlessness I felt with my emotions when it comes to starting your period—there’s nothing more wild and interesting and untethered than a female girl when it comes to the power and depth with which we can feel our emotions.” While we have iconic female superheroes that exude strength in a more feminized, traditionally admirable way (think Wonder Woman or Captain Marvel), the ones that many female viewers connect with more deeply are those that feel more real, even if that means they seem messy or come across as unhinged to those who expect women to maintain a facade of complete control at all times.

Think of the impact of Stranger Things’s Eleven (Millie Bobby Brown) or Carrie (Sissy Spacek) in the original 1976 film. The creators of I Am Not Okay With This quickly became aware of the way their work recalls Carrie, especially in the opening scene with Syd, blood-soaked and walking through the darkness. “It suddenly dawned on me once we started that process,” Hall told Entertainment Weekly. “It’s a very cool image but it’s very similar to Carrie. While making the series, though, they recognized they were entering a space where young women are messy (“Maybe I’m more fucked up than I thought,” Syd muses when her rage-fueled telekinesis puts a hole in her bedroom wall) powerful, and don’t always employ a moral stance when deciding how to deploy their powers.

“You have these prized female characters like Roald Dahl’s Matilda, Stephen King’s Carrie, the very beloved Eleven from Stranger Things,” Hall told Variety. “We knew we were entering into the sandbox of these treasured characters. We didn’t want to be afraid of leaning in to these treasured, iconic, visceral images that we had all grown up with. Simultaneously we always wanted Sydney to feel unique in her own way, that she is her own version of this celebrated landscape.” As Bitch cofounder Andi Zeisler wrote of the 2013 Carrie remake, “Carrie is unique in the pantheon of classic horror movies for being entirely a women’s story.” I Am Not Okay With This carries on that tradition by keeping Syd’s voice and experiences at the forefront. Even as she bends metal with her mind and causes deaths (spoiler alert: she accidentally kills her brother’s pet hamster), she stresses about the pimples on her thighs and how she finds her best friend a little too pretty.

Right at the core of the superhero storyline are her concerns about finding a way to get groceries home as a favor to her mother, who has been struggling with money ever since Syd’s father died, and worrying about not being a good enough sister to her little brother Liam (Aidan Wojtak-Hissong), who she affectionately calls Goob. Her world feels tangible and carefully considered, her stress piling on and on in a universe where everything from clothes to furniture is brown or flannel. But it’s a dreamy one, too, where it’s hard to know what year it is (technology is all over the place in a Riverdale-esque way) and not very difficult to convince your weed-loving neighbor friend Stanley (Wyatt Oleff) that you have superpowers.

Syd’s queerness makes the show feel modern, resonant, and unique. Ultimately, it’s not her loss of girlhood that we’re engaging with as viewers; Syd’s burgeoning lesbian identity, in particular, becomes verbalized via her superpowers. She’s very much in love with her best friend, Dina (Sofia Bryant). “She’s such a badass,” Syd says while looking at her best friend with heart eyes in the first episode. “She has this way about her that…she makes me feel different.” In the show’s first episode, while at the diner with Dina and Dina’s new boyfriend, Brad (Richard Ellis), Syd thinks to herself, I wish he’d stop talking, and wipe that smug smile off his stupid, stupid face. Promptly, his nose starts bleeding. She laughs off the idea that she convinced herself that she made his nose bleed, narrating that she can’t risk losing her best friend or her mind. But she has, in fact, made Brad’s nose bleed as her love for Dina, frustration with Brad, and no-longer-latent superpowers meld.

Syd’s burgeoning queerness, in particular, becomes verbalized via her superpowers.

The third episode begins with Syd sharing with Dina that she slept with Stanley—she tells Dina the sex was great, but internally narrates, “Something just didn’t feel right”)—but as the episode continues, her feelings for Dina become clearer. As they sit cross-legged across from each other, Dina does Syd’s makeup, and Syd can’t stop looking into her eyes. At a party that night, Dina is upset about a fight she had with Brad. Next to each other in bed, the room empty and the music muted by the bedroom door, the girls kiss until Dina pulls away. This is another impetus for explosion: Syd runs through the woods in the darkness alone and reflects on the kiss. She screams, “Fuck!” and the trees surrounding her are immediately knocked to the ground by the force of her powers.

In the last episode, Syd experiences some of the most terrifying moments of the entire series. After secretly digging into her father’s past, she realizes her father struggled with the same powers she’s struggling with now. She chooses to be in the best mood ever, smiling and nodding and being generally agreeable. She’s going to maintain control, and everything will be fine. But true to form, the last episode ends with a school dance where everything explodes, literally. As the girls dance together, Dina admits she actually didn’t hate the kiss, and the girls almost kiss again when Brad, single and angry about it, returns with a vengeance. He’s found Syd’s diary, and he’s going to share everything he knows. First he announces to the entire school that she’s a “full-on dyke.”

Brad says he’s fine with girls getting drunk and kissing sometimes, but this is a “whole other ball game.” When Brad begins harping on Syd’s “daddy issues,” Stanley rushes to her defense, but he’s quickly knocked down by a punch. Brad leads into “the weirdest thing about Syd,” and we watch as Syd gets visibly frustrated, thinking to herself, Shut up, just shut up, and then it happens: Brad’s head explodes. Cue blood everywhere and Syd walking through the dark covered in blood à la Carrie. In this scene, the show’s creators take liberties with the source material, a graphic novel of the same name by Charles Forsman. Instead of having Syd die by suicide as she does in the book—which would have been painful to watch, especially given the Kill Your Gays trope—the show leaves the end of Season 1 open ended. We don’t know what’s next for Syd (or even if Netflix will order another season), but we do know that for now she’s alive and has been given the chance to figure herself out, powers and all.

In her 2013 piece, Zeisler wrote, “Carrie resonates for women in particular because it touches on so much of the horror of becoming female that it’s almost too real.” While watching I Am Not Okay With This, I had similar feelings: It’s horrifying to be a queer teen who feels abandoned by your family, especially when you’re standing in front of a horrible boy who’s beyond ready to reveal your darkest secrets. It’s the kind of thing that can cause a person’s emotions to bubble over or to explode, but in this case, it’s not Syd who explodes but Brad, a human embodiment of the homophobia and misogyny she’s experiencing. “Her powers are tethered to her emotions, or her emotions exacerbate what’s going on inside of her,” Hall says. “That’s a huge part of what, ultimately, is her arc because the two are connected.” Maybe a teen girl soaked in blood doesn’t just represent a woman in emotional pain. Maybe she’s just working on finding and owning her power.

Read this Next: A Quick History of TV’s Elusive Quest for Complex Black Lesbians 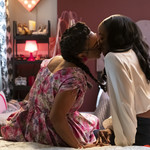 by Jaelani Turner-Williams
Characters are being given more complexity onscreen, as they are offered the chance to explore their queerness in ways typically reserved for white queer women.