Fear of an Immigrant NationHow Many Generations Until We Are Considered Americans? 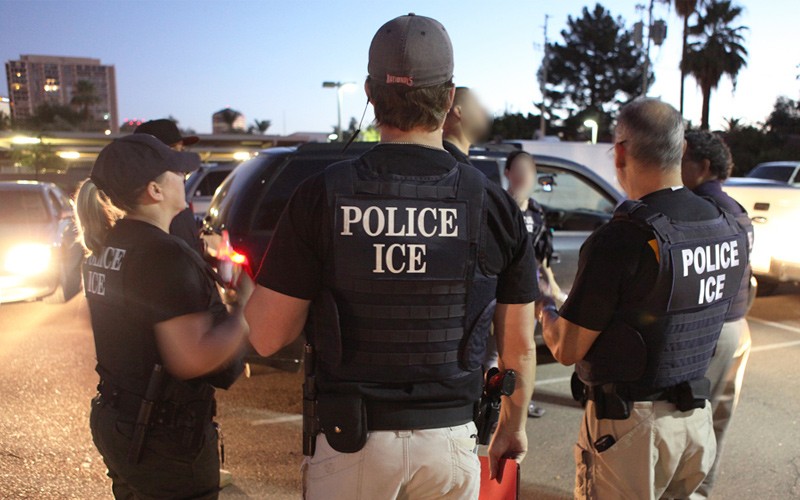 My family emigrated from Nicaragua in the 1980’s, making their home in the mostly Nicaraguan neighborhood of Sweetwater in Miami, Florida. I was born in that neighborhood a decade later. The ongoing joke, when you are born in the states but have a substantial amount of extended family elsewhere, is to make fun of how Americanized you have become (something about our jeans seem to always give us away). And though I no longer live in Miami, my parents do. It is home.

On a recent trip back, however, my mother asked me, with a genuine curiosity:

I stared at her blankly, not understanding her sudden confusion.

I mean to them. Are you American?

With the news playing on a loop in the background, it dawned on me exactly what she meant.

Over 680 people were detained in Immigration and Customs Enforcement (ICE) raids in four major metropolitan areas the week of February 13 (Atlanta, Chicago, New York, and Los Angeles), as well as in North and South Carolina (though there are reports of unofficial raids in other states as well). ICE raids are nothing new. In fact, they were commonplace under Obama’s administration (and Bush’s before his) as planned efforts to remove unauthorized individuals with criminal convictions. These mid-February raids, however, employed tactics that deviated distinctly from how ICE has operated in the past. Namely, allowing for “collateral arrests” whereby ICE officials are allowed to detain any “unauthorized immigrants who happened to be in the place they were raiding, even if they didn’t have a warrant for them.”

After news of the raids broke, the Congressional Hispanic Caucus (CHC) requested a meeting with ICE to discuss these recent deviations from protocol. In an unprecedented move, ICE cancelled the meeting hours before it was scheduled to begin, then rescheduled the meeting for a few days later, barring the CHC members who had originally requested the face-to-face.

The scope and showmanship of simultaneous multi-city national raids is worth taking special note of too. For a week, social media was abuzz with warnings about security checkpoints and door-to-door neighborhood sweeps. Even when accounts turned out to be false, the unsettling feeling of mass paranoia remained. This is not normal. This is not how a government agency catches targeted individuals. This is how you put on a show. More specifically, this is how a government flexes its power in cities that have declared themselves sanctuaries.

When a city declares itself a sanctuary it says that neither local law enforcement nor the city’s resources shall be used to aid ICE in doing their job. This separation of jurisdictions is not new. It means that a local county police officer that pulls someone over for a traffic violation is responsible only for that traffic violation, not for interrogating them about their legal status. What is new, however, is a (questionably legal) executive order from President Trump stating that any city that does not assist federal authorities in identifying and detaining persons thought to be of interest to ICE will no longer be eligible for federal funding.

Miami was among the first cities to comply to the executive order and denounce its sanctuary status, as if it wasn’t home to the largest Cuban population in the country, as if half its residents weren’t born outside of this country, as if its Mayor was not himself an immigrant. Barely 24 hours after the executive order was announced, Miami-Dade County Mayor Carlos Gimenez declared that Miami “was never a sanctuary city” and would comply completely with the new executive order for financial reasons, not wanting to jeopardize the $355 million a year that Miami-Dade County received in federal funding.

Miami is over 65 percent “Hispanic or Latino” according of the 2015 U.S. Census, and only 11-14 percent of the population identifies as “white alone.” To translate: There are 371,000 minority-owned businesses to the 80,000 white-owned businesses, and counting. There are more Spanish-speaking homes in Miami than not. The Mayor himself is an immigrant.

In theory, this kind of upward mobility is precisely America’s promise. But in practice, it is also its biggest fear.

When we talk about immigration, we fall into the parlance of “legal” versus “illegal,” but this has never really been the point. The U.S. wants to see itself as a land of opportunity, where hard work and determination are the only requirements to achieving the American dream of private property and prosperity. But America also has deep seated fears of its own changing demographic, a fear that is not abated by our having papers or not.

Gimenez did away with Miami’s sanctuary status, but that won’t protect his city (dubbed the capital of Latin America), or himself, from barely-legal raids. You can use your mythical bootstraps to pull yourself all the way up to Congress, but there are still rooms you are not allowed to enter. The rhetoric never changes: Immigrants are great! But only if they speak English. Immigrants add so much color to the community! But only if they’re not our neighbors. Immigrants take real Americans’ jobs, immigrants clog public services, immigrants are dangerous.

Notice how the caveat of legality never appears on this side of the rhetoric. Because it never mattered. We keep waiting for the magic number, how many generations until we are considered Americans? The answer is: You are always deportable. This administration wants to hide behind the distinction of “legal” and “illegal” but if it cared about legal immigration it wouldn’t make the line 15 years long. What will happen when the raids can’t find the targeted individuals they were looking for? What does the privilege of citizenship look like after the wall? If the only requirement for a sanctuary city is that it protects its residents, does a non-sanctuary city actively prosecute them? When there are no imagined external threats left to blame a country’s problems on, who will count as American then? Gimenez recognized the bully in hopes the bully would recognize him, but that promise was always empty.

Are you an American to them? That was never the intention.