If the Resistance Fits | Bitch Media 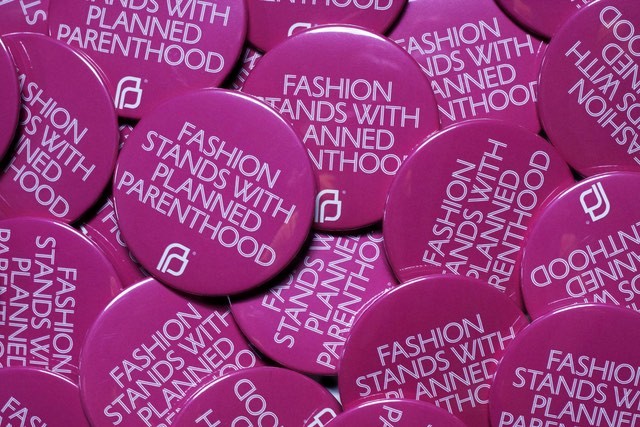 Image by Kelsey Fairhurst via CFDA

Every February, fashionistas, editors, celebrities, and models descend on New York City to feast their eyes on the newest fashions. This is New York Fashion Week, a tastemaking event as well as a business endeavor that sets the tone for the year’s trends, fashion media coverage, and fashion’s cultural currency.

Though it’s easy to see fashion as frivolous, it’s not apolitical. Consider Michelle Obama’s decision to frequently wear clothing by lesser-known and immigrant designers and shine a national spotlight on their work. Consider the numerous designers who have said they won’t dress Melania Trump. Resistance is au courant, and don’t think designers haven’t noticed.

This year, the Council of Fashion Designers of America, Inc. (CFDA) launched the Fashion Stands with Planned Parenthood campaign, distributing pins and information cards that detail Planned Parenthood services and information about how to get involved with or help the healthcare organization. More than 40 designers featured the pins at their shows, and even Vogue Editor-in-Chief Anna Wintour wore one. 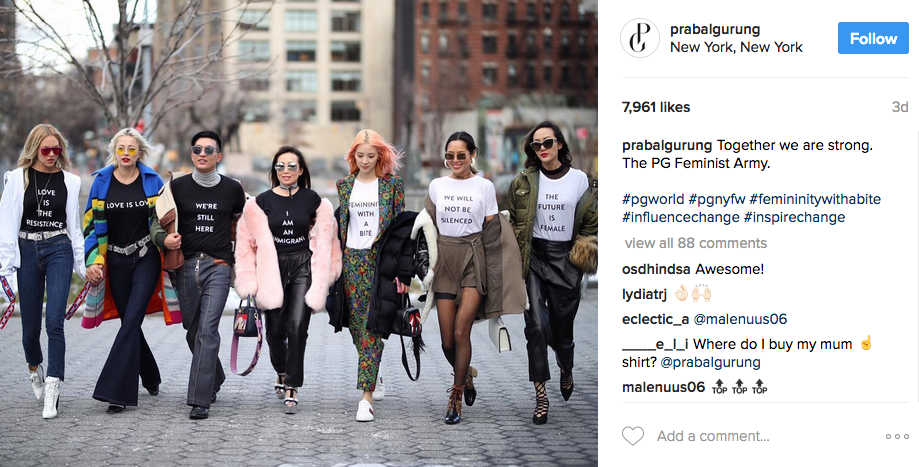 Feminism and resistance was in the air at many designers’ shows. At Prabal Gurung’s show, models wore shirts that read, “We Will Not Be Silenced,” “Nevertheless, She Persisted,” “Yes, We Should All Be Feminists,” and “The Future is Female” and walked down the runway to “Respect” by Aretha Franklin. Gurung, who is an immigrant from Nepal, came out for his bow wearing a shirt that read, “This Is What a Feminist Looks Like.” Mexican-born designer Raul Solis sent models down the runway with political messages like “Fuck Your Wall” written on their undies.

This is cool (which is what fashion is supposed to be and YES: fuck your wall), but we need more than cool. Coolness is not activism. The CFDA pins didn’t raise funds for Planned Parenthood—even Cosmopolitan admits the Fashion Stands with Planned Parenthood campaign “is about awareness and a show of support, more than anything else.” And t-shirts with feminist slogans are great (this is coming from a person whose workwear is practically exclusively feminist slogan t-shirts, so I say this with sincerity), but if proceeds don’t go to an organization that’s working toward feminist goals, then those shirts are marketplace feminism: a feminism that is only bought and sold. As Bitch Media cofounder Andi Zeisler wrote in her book We Were Feminists Once: From Riot Grrrl to CoverGirl©, the Buying and Selling of a Political Movement, “Reinscribing feminism as something you dress in or consume, rather than something you do, accomplishes nothing.”

Still, that doesn’t mean fashion can’t make a statement that’s real, and in these horrible times, I am ready to be less cynical. I am encouraged by these and other politicized shows during fashion week; speaking up matters, and fashion can be an artistic medium. Prabal Gurung flat-out stated when speaking about his show, “For me, feminism is not just a trending topic,” and the designer has been working toward greater size inclusivity in his work along with Christian Siriano. The show for AnaOno intimates featured breast cancer survivors on the runway, some of whom, including sex educator Ericka Hart, showed their mastectomy scars. Designer Jonathan Simkhai wore a “Feminist AF” shirt during his bow, then donated $5 for every seat at his show to Planned Parenthood. He is donating proceeds from the sales of the shirts to Planned Parenthood as well. At Rebecca Minkoff’s show, MILCK performed her song “Quiet,” which reached viral fame after it was performed at the Women’s March. During Tracy Reese’s show, four female poets performed, including Aja Monet, who read from her piece “My Mother Was a Freedom Fighter,” which she also performed during the Women’s March on Washington. Mara Hoffman asked the four national cochairs of the Women’s March on Washington, Bob Bland, Tamika Mallory, Carmen Perez, and Linda Sarsour, to speak before her show; each ended their statement with “Hear our voice,” one of the chants from the March.

In her book, which came out before the election, Zeisler predicted the masses who are “ready to make a simple, declarative statement into a small act of resistance.” Encountering another person in public wearing a shirt that says, “Feminist AF” or “The Future is Female” can be meaningful—a small act of resistance—but it’s only purposeful if it leads to action beyond personal expression. The point of feminism is to liberate—and not just those who look like you or are you. It’s moving to see so many artists being influenced by the Women’s March on Washington, and I’m overjoyed to see New York Fashion Week take a political stand and support Planned Parenthood. I also look forward to the CFDA increasing visible and financial support. If the Women’s March on Washington has inspired the fashion industry to work toward furthering feminist goals, then I couldn’t be happier. Let’s get to work.

Relevant: Feel Me Up 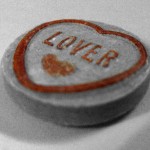 by adrienne maree brown
Stay here. Because second base is when the intensity of the kissing and desire gets to spread to the entire body.