After a full year of silence in Mexico’s underground music scene, goddess producer Mou returns to our speakers with the release of their first solo digital EP as Manitas Nerviosas, Ilumíname. (Full disclosure: Mou and I played in a punk duo together for a year in 2009.) For longtime fans, the production of this record is a clear sign of the evolution of the artist. Mou has spent 15 years in the ripples of psychedelic rock, becoming a multi-instrumentalist, creating ambient live noise with tech gadgets, and, lately, giving in to the magic of synthesizers and the role of electronic sounds.

The fruit of such hard work is presented in these three surprisingly sweet, solid, and soft tracks of the purest hard-femme synthpop. Drafted, destroyed, and rewritten during 12 months of personal loss and obsessive remorse, Manitas Nerviosas’s EP piques nostalgia for the new-wave era, and calls attention to Mou’s willpower in a time when, musically, it seems everything has already been done.

Fully recorded and mixed in a bedroom studio surrounded by mountains in the industrial city of Monterrey, Ilumíname features fuzzy Japanese and analog French synth sounds, accompanied by velvety vocals. The title track is a dark cover of Chicago’s “Colour My World,” a love ballad that Mou pays tribute to by adapting the lyrics into Spanish couplets of despair. These sad verses have the potential to make a sunset sink into the darkest corners of the heart. “Sinergia Total” is a more complex piece, leaning harder on the no-wave sourness of the late seventies, with hybrid influences of Bowie’s passionate singing style and the elegance of a good electro postpunk hymn. It’s the perfect soundtrack to a lonely rainy weekend for the existential soul. “Male Synths,” the last and most minimal track on the EP, is a joyful ode that will make you drop everything you’re doing to start a dance party in the middle of your chores.

Ilumíname is not only the reemergence of a talented star and dynamic music maker; it’s also the release that Mou has chosen for their official coming out as a gender-fluid individual. In a dangerous time for folks who don’t conform to the norms of the heteropatriarchy, Mou bravely walks onstage as proof that both gender transgression and resistance are more relevant than the fear and hate of the outside world. 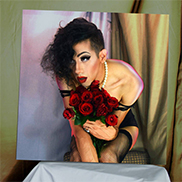 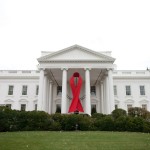 by Evette Dionne
Every December 1, the world commemorates the lives lost and the progress we’ve made